Dawit as an artist is particularly engaged in the craft of Pyrography.

Solomon is a content editor at Addis Zeybe. He has worked in print and web journalism for six years.

“I saw people enthralled with a feeling of awe, their eyes watering with tears and smile cracking in their face, as they first glance over portraits of their beloved ones drawn by me,” says Dawit Messele, a Pyrography artist, burning a flat wood on his table with a hot iron following the pencil outline sketch of his latest portrait on the wood.

On the flat wood is sketched a portrait of couples with pencil outlines. Draped with an African attire, adorned with traditional patterns, the couples see each other deep into their eyes with affection. Dawit uses different techniques and heat ranges while drawing on the wood with a hot iron he uses as a pencil. He plays with varying iron pressure and heat temperature so as to create various tones, shadows, detail, outline, and texture of the sketch. As he continues scratching the wood with the hot iron, vivid details of parts of the image eventually emerge.

“Drawing portraits on wood poses a special challenge, it may seem that I'm just duplicating a person's image but I also need to delineate its emotion,” explains Dawit changing the tip of his hot iron with another sharp tiny tip to burn outline details of the eyelashes of the woman’s sketch. He says creating shadow and texture in wood-burning art is the key in the process of etching the image and constructing the human emotion lying behind the picture.

Dawit as an artist is particularly engaged in the craft of Pyrography. The term pyrography means "writing with fire" derived from the Greek pur (fire) and graphos (writing). It can be practiced using specialized modern pyrography tools or using a metal implement heated in a fire, or even sunlight concentrated with a magnifying lens. Wood-burning is an old art form. According to literature, the earliest extant pyrography artifacts are from Peru and Roman Britain and date back well before the First Century AD. 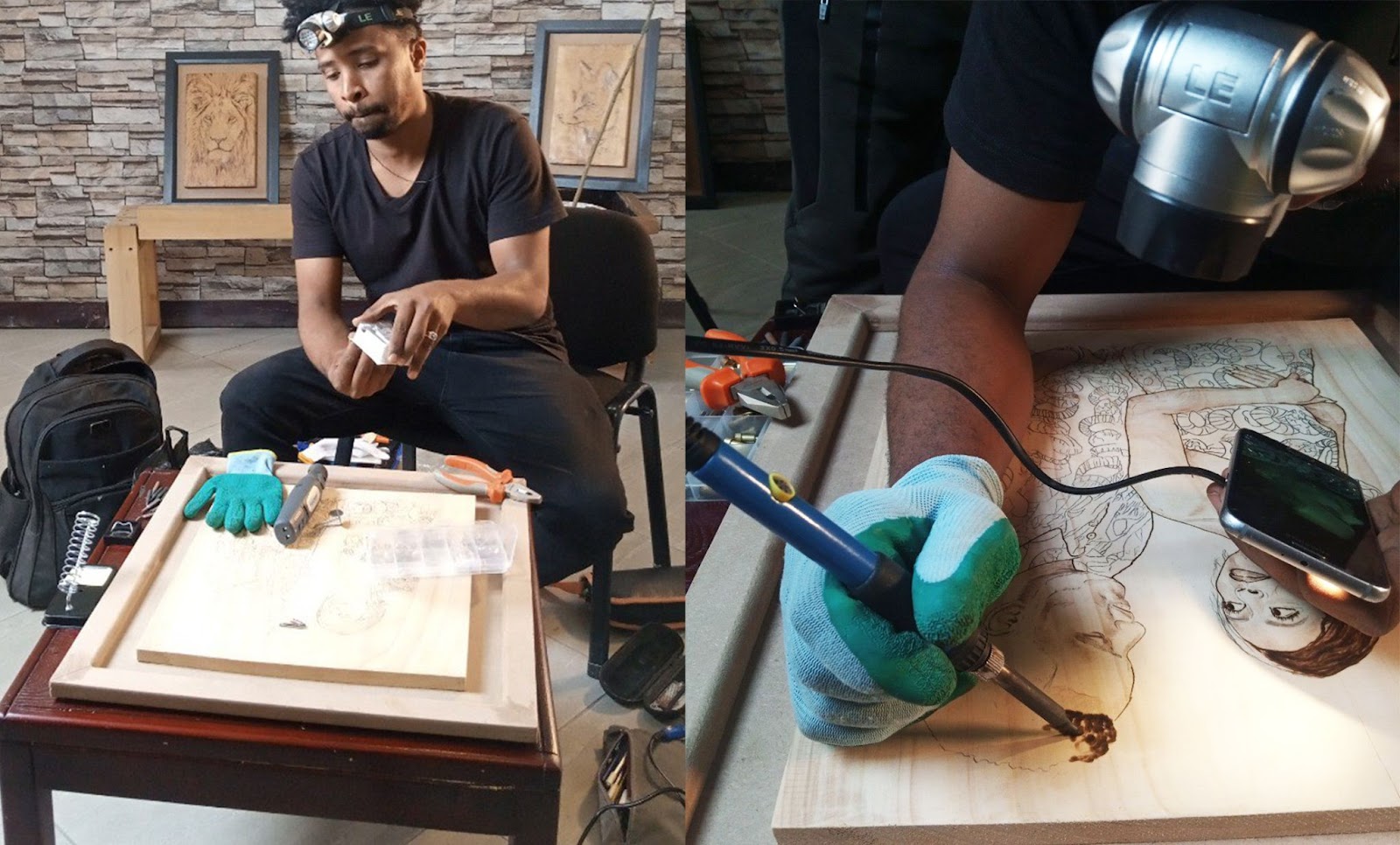 Wood burning art is an exciting art full of wonders for Dawit, a realized fantasy of painting with fire. “When you do Pyrography drawing you don’t only create lines and textures, but also you play with the natural elements of the wood grains. Beyond the fun, it’s a very rewarding trade.

“The process of studying the picture to be drawn and engaging in the craft of burning the piece of wood and bringing the image into life is a blissful act full of experiences.”

Despite lots of appreciation and positive feedback showered on Dawit from the people who saw his works, he says his artworks didn't reward him economically.

"Some are even amazed when I tell them the price of a portrait drawing and tell me to raise the price a bit," says Dawit who currently makes a living as an artist. "I know the artwork is not worth that low price but I’m coerced to ease my economic burden for the time being." He offers an average price of 4000 Br. and charges 2500 Br. for medium-sized portraits.

Dawit, who also does other art forms including graffiti and glass engraving, says his inclination to art became visible during his school years when he used to sketch with pen and pencil and developed his skills well through time. At the time he learned about Pyrography art from a friend who returned from abroad, Dawit says he began to search for people who can help him by sending the tools required for wood burning from abroad.

“When I started working on wood burning art, the main challenge was finding the right type of wood suitable for the work,” he says After months of an experiment he could learn about the most popular types of suitable woods like Australian wood, Oak, and a local wood called Shashemene, which is available with an affordable price in the market.

“Sourcing the best type of wood is still challenging me. Softwoods are better to carve details and contrasts of designs easily. If you start with the wrong wood you may suddenly find it split when it gets heated” 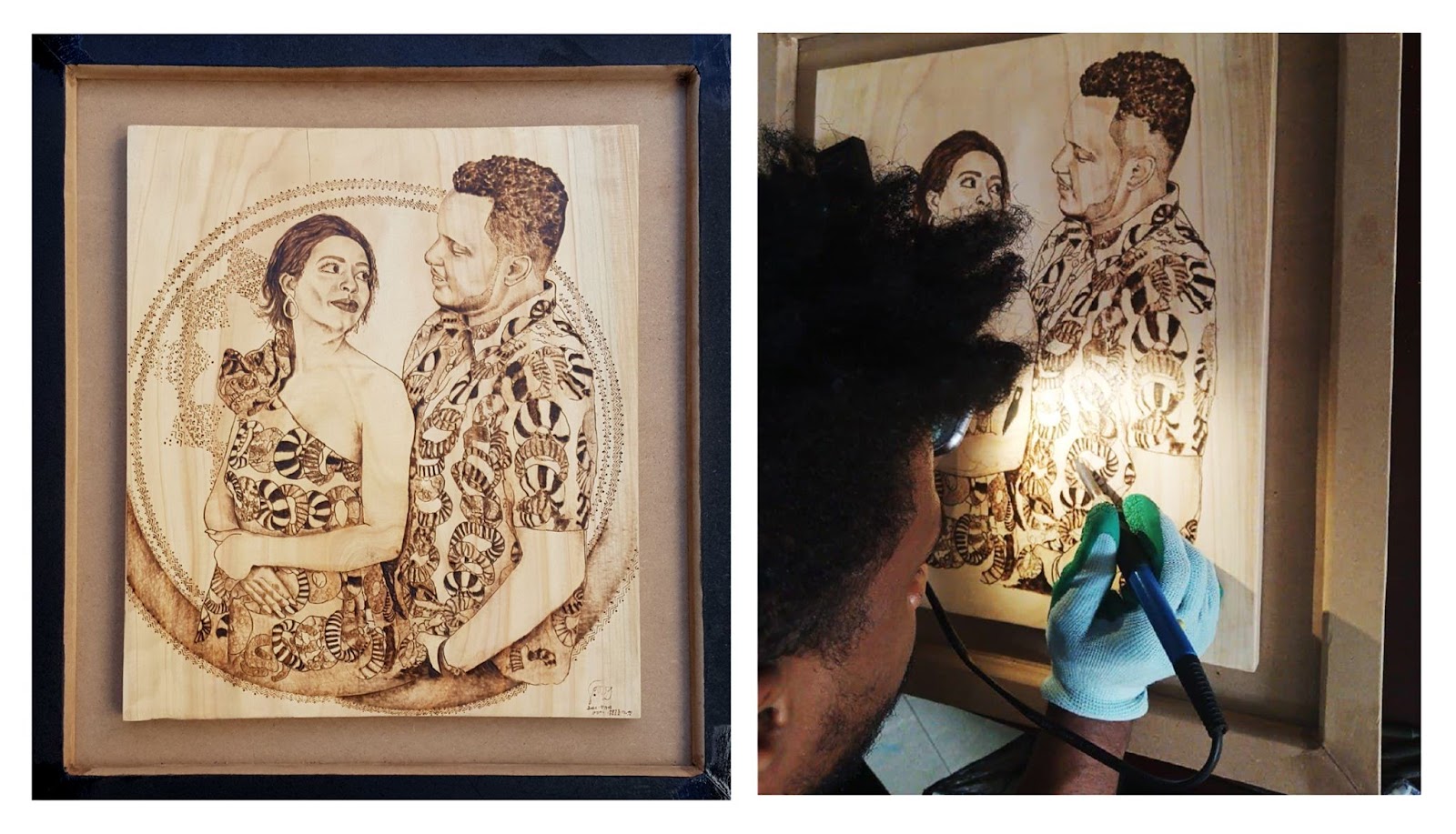 Though it depends on the drawing and the type of wood, Pyrography is a time-consuming endeavor. Dawit says it usually takes about six to eight hours for each piece in order to draw the right amount of detail.

Dawit attended basic art education at Abyssinia Art School which was a stepping stone for him to join the artistic world. "When I began the Pyrograpy art it took me up to three days to complete one portrait. It was tiresome to put each and every detail onto the wood. After years of practice, I could master the techniques better.”

Three years ago Dawit opened a start-up called Hibir Art and began to promote his work through social networking sites like Telegram, Facebook, and  Instagram, where he received most of the portrait drawing orders. 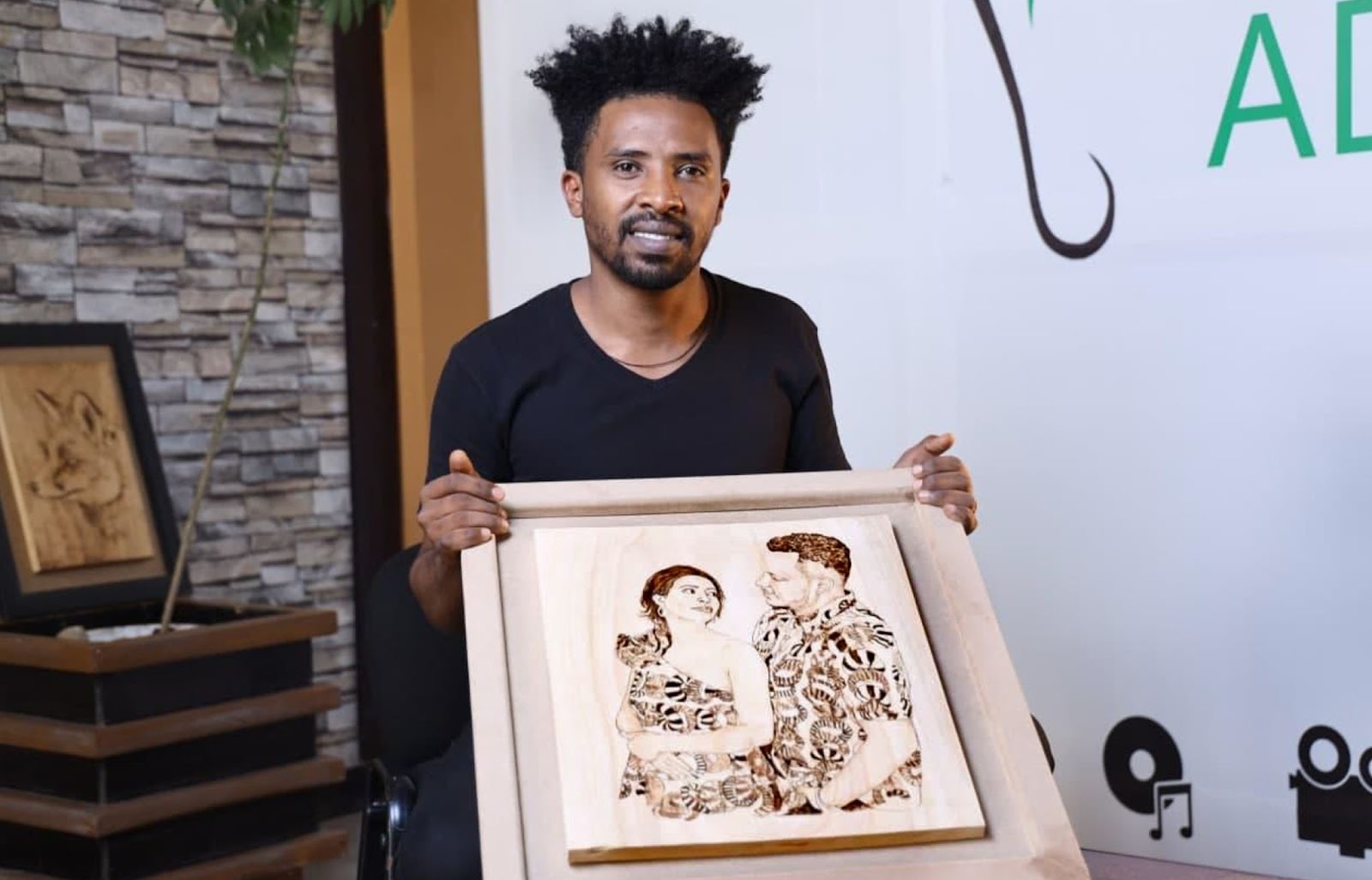 "I would like to thank all my customers who have brought me such joy in being a part of their personal emotions and let me honor them with my gifts as well."

Since he started wood burning art three years ago, he's completed a number of portrait drawings requested by friends and other customers.“Most of my clients are youth who contacted me through social media. They send me the photographs to be drawn on wood and place an order.”

Dawit has done several portraits of families, children, grandchildren, and parents over the last three years. He says these portraits drawn on wood invoke a special reaction and happen to be spectacular to those who had commissioned his work, and those receiving the items as gifts.

However, Dawit sees very little interest from his clients on other drawings, apart from portraits, such as endemic animals, natural and cultural subjects.

Dawit sees a more productive future in his career. He plans to open an art gallery in the capital where he can showcase a collection of mixed art pieces including the pyrography arts.

He also seems ambitious to transfer his skills to those who are interested. “I would be happy if  I could create an opportunity for youth who are interested to practice wood-burning art to explore their talent.”