In the popular travel journal Magazine Travel Awaits, the expert climber and traveler Sarah Kingdom included Inn of the Four Sisters in Gondar in her list of nine favorite restaurants to experience in Africa.

“For a really special place to sample Ethiopian food, try Four Sisters restaurant in Gondar. This is one of the best places in northern Ethiopia for both food and atmosphere,” recommends Sarah.

This inn found in the city of Gondar is acclaimed for its diverse menu and customer services.

Inn of the Four Sisters was established 10 years ago. Located just 300 meters from the castle of Emperor Fasilides, which is the major tourist attraction site in Gondar, the hotel is easily accessible to those who come to visit the historical complex.

As the name gives it away, the owners are four sisters who live in Gondar. They are Tena Siraw, Helen Siraw, Senayet Siraw, and Eden Atenafu. Eden, the youngest of all, said that the four of them built the inn from scratch.

“This part of the city was a trash-disposing area. We bought the land with lease, cleaned it, and started a small coffee business, with a souvenir shop on the side,” said Eden explaining how they started out a decade ago. 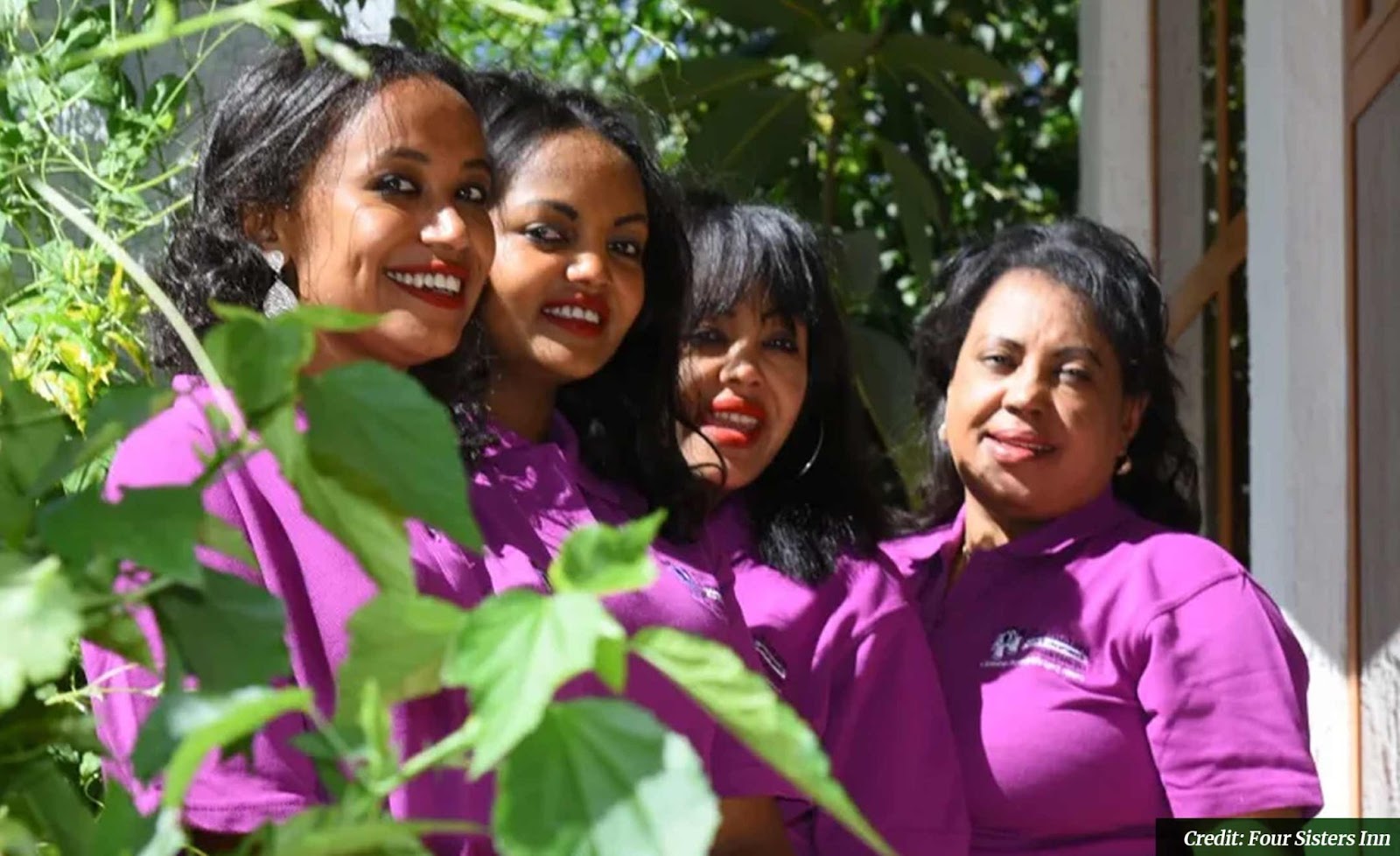 At that time, the convenient location of their coffee shop, close to the castle, and the fact that they were the only ones in the coffee business made the sisters’ place a choice for many tourists on their way in and out of the royal enclosure.

“Tourists would come and rest at our shop to have a taste of Ethiopian coffee and buy gifts to take home,” said Eden.

Eden also recalled that she and her sisters grew up seeing tourists every day as their childhood home was also near the castles. That, according to her, was a lesson in itself on how to interact and do business with tourists.

This inn, which took years to gain its current status, is frequented by many, especially tourists, for its special menu of traditional dishes.

One is warmly welcomed to the inn with ushers wearing traditional Gondar costumes. There are musicians adding flavor to the cultural set-up of the inn by playing traditional instruments like masinko (a single-stringed instrument) and washint (flute) at the entrance hall.

Humble hostesses let guests wash their hands with warm water upon arrival. While waiting for their requests, customers snack on traditional treats like bread with awaze (hot chili sauce).

The traditional coffee ceremony with all its accompanying grandeur is always present in the hallway for interested customers.

The restaurant has a capacity of serving 200 people at a time. 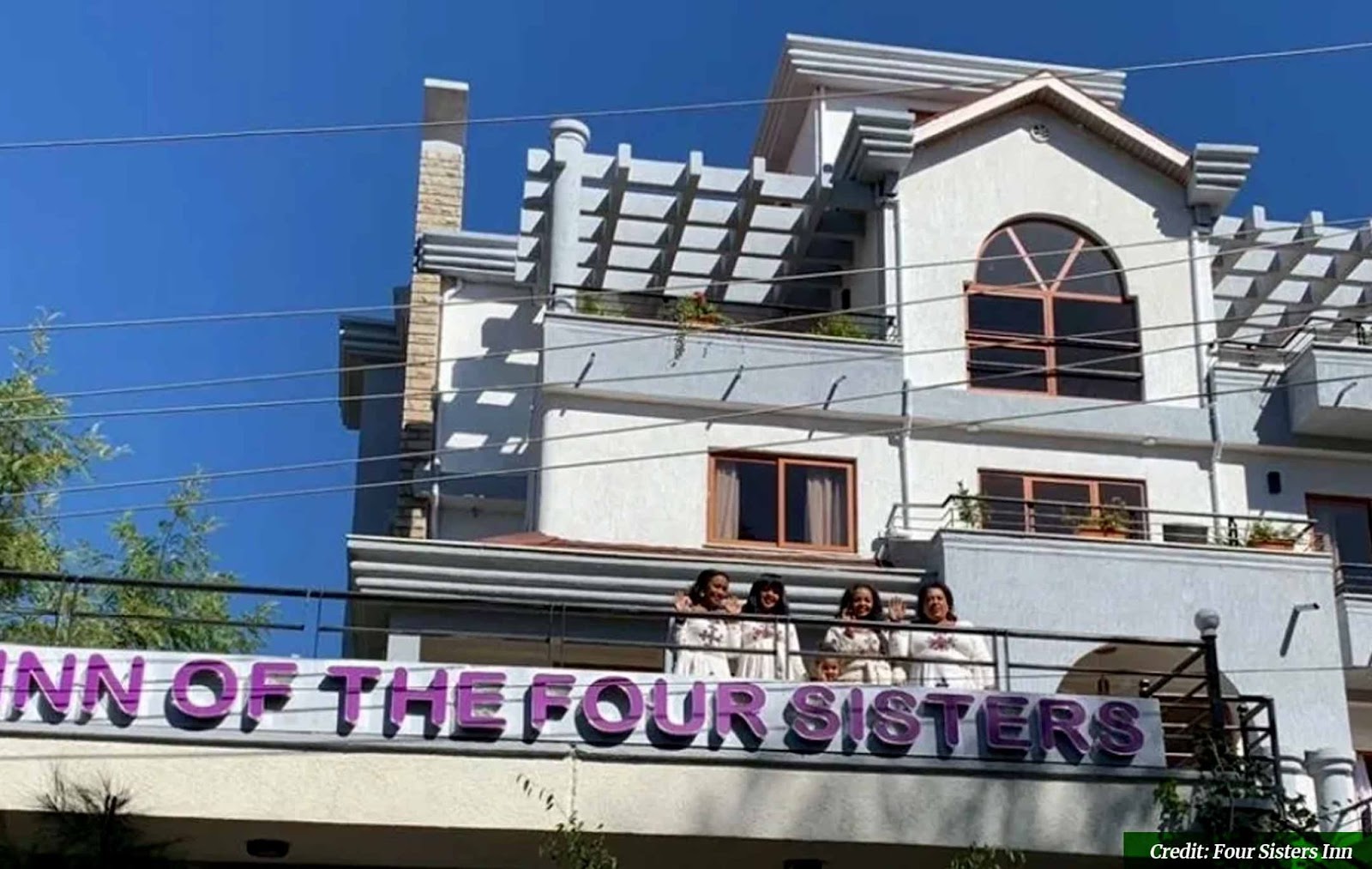 A variety of dishes ranging from Ethiopian cuisine to western ones are served in the restaurant with a generous buffet. The traditional dishes include porridge, tegabino (stew made from chickpea flour),  telba fitfit (flax seed sauce mixed with small pieces of injera-flat sour bread), lentil stew, and many more.

“Our mother helps us a lot with the traditional food preparations. The ingredients, spices, and the whole mix are supervised by her and that has given our dishes a home flavor (homely taste),” said Eden.

Jeff Paul is a regular customer at Inn of the Four Sisters. He is from California and has been to Gondar six times in two years. He says, “This is the only place I know in the city where you can get genuine, well-prepared Ethiopian traditional dishes.”

Jeff is also impressed with the administration of the inn on their catering to the needs of their customers, thinking of possible inconveniences, and preparing ahead. “Gondar has its power outages; the electricity is interrupted sometimes but the inn has a large generator. So you barely miss anything as they also have wifi access,” said Jeff.

Lielena Mesganaw is from Jigjiga, Somali Region of Ethiopia. She is visiting the inn for the first time.

Lielena said she booked into the inn online before she came to Gondar. She praises their services right from the start. “They have great hospitality starting from the shuttle driver. When we arrived, every staff member was outside welcoming us with a smile,” said Lielena, also adding her delight with the music at the entrance. 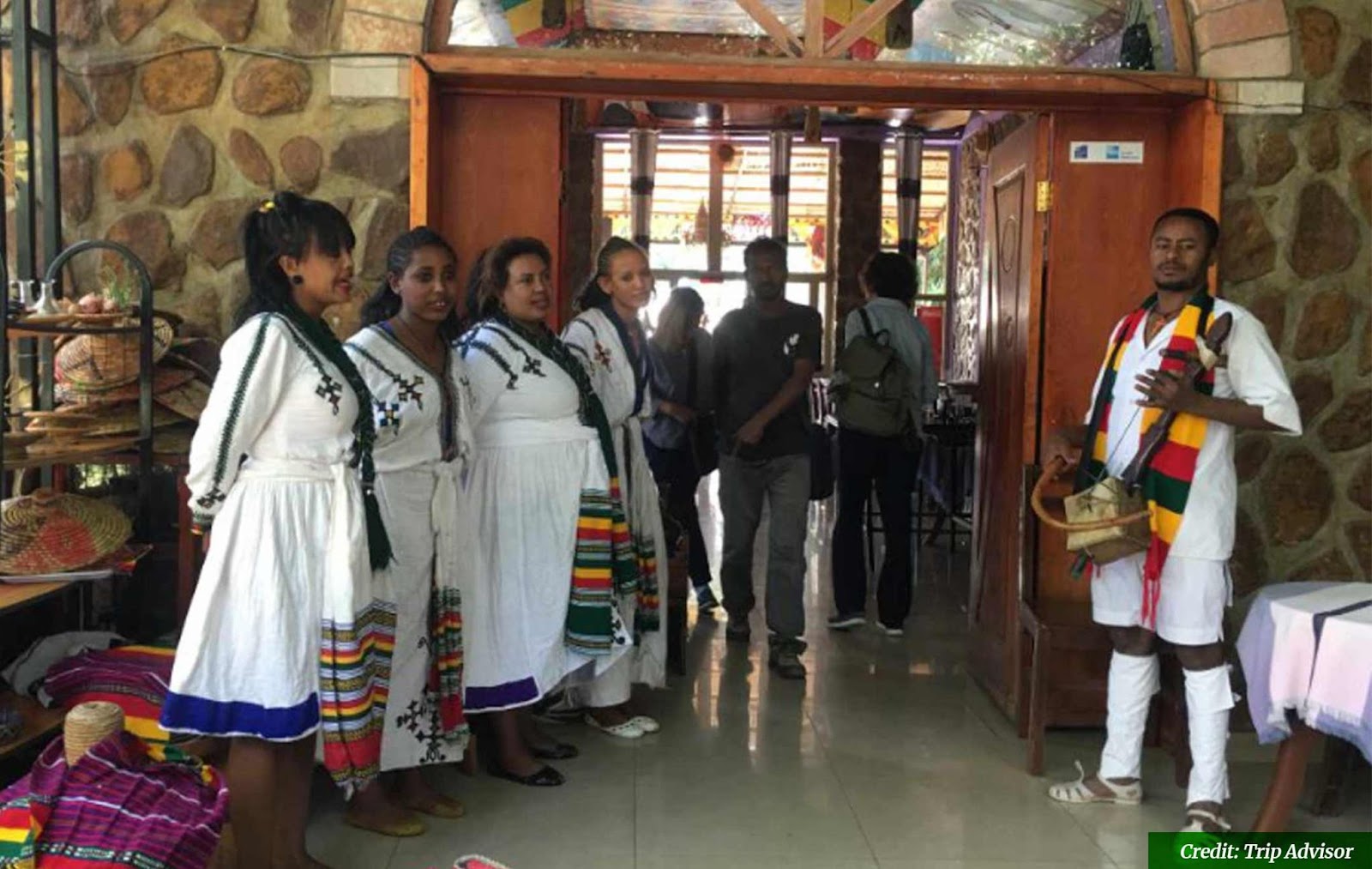 The vigorous staff that serves with a smile is the other thing customers are happy about. And the fact that all employees at the inn, but four, are women is something unique about the inn.

Eden explained that the management did this on purpose. She said, “It is important to support women. Not only are they efficient and honest but it is also in our interests to give women opportunities. We never forget the challenges we have gone through before we reached here. We believe women can do wonders if given the opportunities.”

The much-celebrated Inn of the Four Sisters has been a landmark in the city of Gondar for a decade. Apart from relentless efforts in perfecting their services, Eden explained that the reason behind their success was their business marketing.

She said, “We know how to approach tourists as we have stayed in the business for long.” She told us that they did the marketing themselves before they became known going as far as giving out brochures to tourists.

“It was unheard of at the time and people in the city thought we were crazy. We don’t do that anymore as our customers do the marketing for us now,” said Eden.

The inn has 14 bedrooms comfortably furnished; with balconies that provide great views. Every bedroom has a bathroom, a large flat screen tv, and a wardrobe. Ironing facilities and a business center are also available at the inn.

The inn also has a bar, a garden, and a safe parking area.

“I love this Inn of the Four Sisters. It’s like a little oasis. You can sit and relax in its lovely courtyard,” says Jeff, the regular customer.

This laid out plan was tested when Covid-19 broke out worldwide, reducing tourist flow to a record low level.

“The outbreak affected every business. As for us, though we have local customers, most of our guests are foreign tourists and the travel bans worldwide hit our business hard,” said Eden.

Before the pandemic, the inn had 42 employees, 38 of them being female. The pandemic forced most of them to lose their jobs. Now only 19 employees are working at the inn.

Given the situation, the inn is still thriving, according to Eden. “The fact that we are doing well in the business is also helpful to the entire value chain, starting from the vegetable vendors we buy ingredients from all the way along,” she said.

Despite its struggles with the consequences of the Covid-19 outbreak, the inn has continued to grace the city of Gondar with its professional staff and services, being the most sought-after place in the area. It sounds like their goal to become Africa's number one is already being recognized for they have succeeded in becoming one of the top ten.

Eden says families, relatives, and friends as well as the people of the city have put their own marks on the success of the inn in various ways. She particularly mentions her sister’s husband, a British citizen, who helped them with ideas and finance as well.

Commending the inn for its modern and clean facilities, Lielena, the tourist from Jigjiga said, “If you are going to Gondar, the Inn of the Four Sisters is the  place to feel at home.”

OPINION
PREVIOUS ARTICLEWhat made Kenya darling of tech giants over other peer countries?
NEXT ARTICLETPLF denies forced conscription of people into its forces, says formal mobilization is becoming a must