Perils of Ethiopian parenting in the digital age

“If the parents themselves spend most of their time on their phone, chances are kids will be addicted to phones too."

Yabsra Kiros is a Social media curator at Addis Zeybe also he is interested in learning and expanding his writing and journalistic skills.

Credit: Yabsra Kiros. Dagmawi the Woinishet’s elder child and won't allow anyone to take the phone away from him

Woynishet Amha, a mother of three, is a housewife. As the only parent who spends most of her time with the kids at home, she faces the challenge of managing them, especially Dagmawi, her eight-year-old boy, parallel to her house chores.

Just to make the little boy calm for some time, she usually gives him her mobile phone and would get some time to focus on her work.

“Since I have nobody to take care of him, I just give him my phone. That is the only option I have,”  says Woynishet.

However, after some time, she found out that her little boy had become addicted to the device and it became hard for the family to separate the kid from the phone. Almost every time, while he is eating, walking, and even sleeping, Dagmawi doesn't give any chance to anyone take the phone away from him

“I was giving the phone just only to make him occupied but gradually he became addicted to it,” she says, “I usually don't check what he is doing on my phone, I sometimes see him playing games and opening apps.”

With the emergence of smartphones and other digital technologies, many children in urban areas spend much time on phones looking for something which interests them. Even realizing its psychological and developmental effects, many parents are puzzled on how to protect them from these negative impacts.

As a father, Bamlak Haile is also concerned about the phone addiction of his child. Though he knows how unsafe the digital tool is, Bamlak couldn’t do anything to solve the issue. 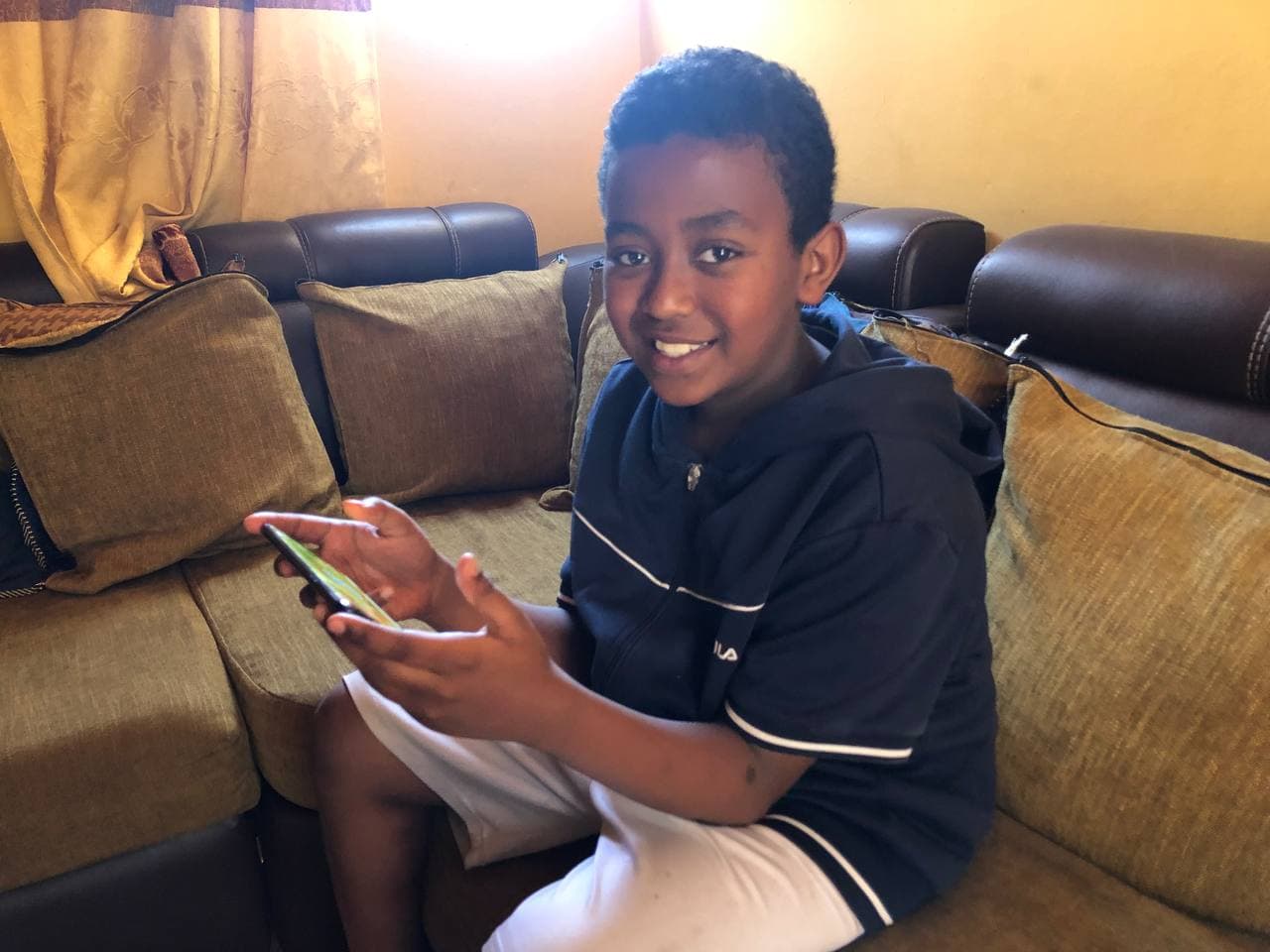 “My oldest son can’t stop playing with his mother's phone and isn't doing good academically as his grades have dropped in the past months,'' he says.

Some parents tried a lot to get their kids away from the phone, others did their best to provide the device with applications that they thought would help them with their education and mental development.

When Nega Adugna, a software developer, embarked on developing educational applications for children, it was just for experiment, if not a talent, for his five-year-old daughter Mayana who spend hours on her parents' mobile phone looking for something which satiates her curiosity.

Nega, a father of two and founder of TechAddis, an app development company owned by vertex technology, always sees his daughter playing foreign games. In an effort of figuring out why wasn't surprised and can not relate to the foreign games, Nega developed a learning app called Askuala (meaning modern school)  in June 2021, with 7 in 1 educational game intended for kids.

As a parent and technologist, Nega was worried too much as he saw how parents are facing challenges in raising their kids in this digital era. As an IT expert, he says he was always thinking of contributing his share to society to help tackle this pressing social problem.

“The whole project was full of exciting endeavors and I have learned so many things,” Nega says, “I was really amazed when I see my daughter interact with a local learning app which is developed by me.”

Nega says this app, which has tracing, letter voices, matching trains, and other three kinds of games, has got remarkable acceptance from parents too. According to Nega, more features are being added every two or three months to the application which is found in Google Play Store and App Store. Askuala’s latest feature will also be added in the coming month of March. On the other hand, most parents are not aware that there are parental control features installed in their phone that allows them to filter and control what their children consume on the gadget. “I don’t know about it at all,” says Bamlak, when asked whether he tried to use such tools to limit the kid’s screen time or prevent him from accessing unsafe sites.

For Woynishet the main problem is that she has no clue on how to help her kid spend less time on the mobile phone and provide him suitable learning applications which fit his age.

Nega believes that Ethiopian technologists are not playing the expected role in contributing custom learning applications and software suitable for Ethiopian kids.

The developers claim the market is not so attractive that many technologists and companies are not seen entering the market.

“The main reason for the hesitancy is there aren't many professionals interested in educational game development since it is assumed that it isn't profitable like other software development projects and besides there is no notable marketplace to sell or promote such products.”

“If the parents themselves spend most of their time on their phone, chances are kids will be addicted to phones too. Therefore, parents need to be a role model in their digital experience."

Maregu advises that parents should not refrain from saying ‘no ‘to something and put a limit on what they allow their children to do to supposedly make the kids love them.

“If parents really love their siblings, they must raise them with manners and raise them right and that includes the gut to prohibit harmful practices.”

He also urges the government to put controlling mechanisms on some social media platforms he thought would affect children in many ways.

“The mainstream media has a huge responsibility to guide the new generation to the right path and let them grow by their own culture and merit instead of making them follow a trend or style that does not suit their background,” he says.

Maregu lauds the importance of such locally developed educational apps for the coming generations “since kids nowadays intend to have less interest in school and learning, teaching them in an entertaining and interesting way may be the solution to ensure the social sanity of the future generation.”

The drawbacks of smartphone use on children have received attention in recent years. In academia, journalism, and other popular forms of media, there has been a growing concern for the ways that children have increased access to smartphone technology.

According to a recent study by Nebraska University, “Specifically, the behavioral consequences of smartphone dependency in children has received the attention of scholars across the world. An article titled ‘Association between mobile technology use and child adjustment in early elementary school age’ used data compiled from a group of 1,642 first-grade children in Japan to determine whether there’s a link between the use of smartphone technology and behavioral development. The researchers found that routine and frequent use of mobile devices appear to be associated with behavioral problems in childhood.”

OPINION
PREVIOUS ARTICLEEthiopian government must set itself up for the global fuel shortage and price increase: Experts
NEXT ARTICLETechnical and vocational students face low competency rates in Amhara region

What made Kenya darling of tech giants over other peer countries?

In this era of an enormous tech race, Kenya’s Silicon Savannah success story would be an experience worth emulating for other African countries.

3G and 4G technologies were introduced in 2007 and 2015 respectively, and currently, the 4G network is operating in more than 22 cities.

The global finalist will be rewarded a $1 million prize, known as the Nobel Prize for students, for implementing their idea.