Million Fekadu teaches at an elementary school in Addis Ababa. He was one of the visually impaired people who received a modern visual aid device from the Office of the First Lady.

“This device is essential. It enabled us to do things that those who can see can only do. For instance, with the aid of the device, I can go to a supermarket and choose any item I want. I can verify the colors now. The device also made it possible for us to differentiate money notes easily: it has been our major challenge. But beyond all, it has granted us the freedom of reading,” says Million.

OrCam MyEye is hailed as one of the most significant technological advancements of our time. Time magazine named it one of 2019’s biggest innovations in the world. The device is a little bigger than an adult’s thumb, with a high-quality camera and speaker installed in it. A visually impaired person should attach the device to the eyeglasses she/he is wearing and press the button on it to get it started.

The device identifies anything that comes within its range of vision and names it out loud to the user. It could be a thing, a person, or an inscription. This helps visually impaired people to live their lives independently, according to Million.

In a ceremony held at the national palace in 2021, OrCam MyEye was given out to 2000 visually impaired from Addis Ababa, Dire Dawa, and Dessie towns. Zinash Tayachew, the First Lady, expressed her excitement during the ceremony to see the happiness of those who received the device though it was not possible to reach more.

OrCam MyEye is worth 3500-4500 USD (175,000-235,000 ETB) in the current market, the price differing according to the different specifications of the equipment. Addis Zeybe has learned that the manufacturing company, OrCam, donated the devices to the blind in Ethiopia through the office of the First Lady.

A series of training and trials were carried out with the collaboration of the First Lady’s office and the Ministry of Innovation and Technology before the equipment was officially given out to the beneficiaries. The second round donation of OrCam MyEye reached more visually impaired people and this time, it was upgraded, with an Amharic reader installed in it.

The major contribution of the device is its potential to enable the blind to read any writing easily.

When a visually impaired person wants to read texts on a book, a computer, or anything else, she/he is expected to be in front of the writing with the device attached to the eyeglasses. It starts reading when the person presses the button and takes a picture or aligns the camera in front of the text. The device should be properly situated in a comfortable place, aided with adequate light, in order to start reading aloud. It is learned that OrCam MyEye is distributed to blind people in 40 countries who speak 26 languages. 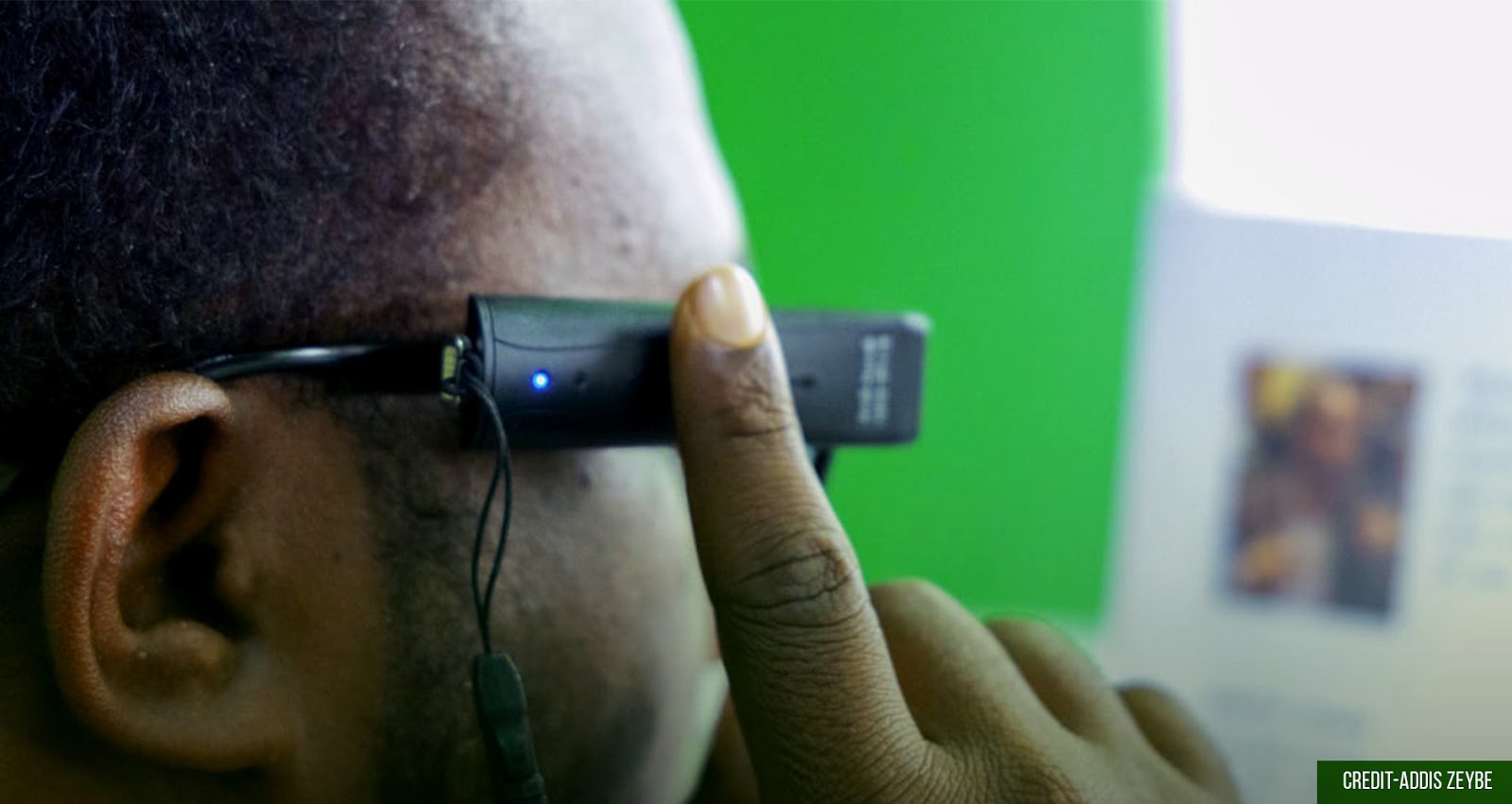 Speaking of its use related to reading, Million says, “The device helped me to choose what I want to read. I don’t have to look for audiobooks or ask people to read for me. I can also go to a restaurant and read the menu to order food. I can easily read advertisements, notices on packed food or medicines.”

The other major function of the device is identifying people’s faces. This way, it registers the face and the name of the identified person, according to the user’s preference, and it immediately recognizes him/her the next time it sees them and says the name out loud. Moreover, it identifies the number of people, along with their sex, if they come up front.

“Regarding identifying people, if I have an appointment, for instance, with my friend somewhere, he doesn’t have to see me first for us to meet. I can now recognize him first and prepare for a reaction with the aid of OrCam MyEye,” says Million.

Similarly, the equipment recognizes chairs, tables, windows, trees, staircases, walls, and other things if they pre-registered. It also tells the time if the watch is held in front of it.

Limitations of the device

OrCam, despite its multifaceted services, has flaws too, according to user reviews. Yishaq Abera, a legal expert, says he has profited a lot from the device though “sometimes the reader’s voice breaks without finishing a single page, even with a good light over the writing”.

OrCam MyEye has both English and Amharic voices. However, as the Amharic reader started recently, it’s likely to have some flaws. Speaking about the Amharic reader, Million says, “I consider the Amharic service as being a beta version. The stated drawbacks are not such major hindrances that would make us misunderstand what it says.”

Ezra Dereje, an attorney who’s using OrCam MyEye told Addis Zeybe that the device is upgraded to the stage where it included the Amharic language. “This is remarkable progress. I now can independently read legal documents. This is a huge relief for me. But I noticed that it misreads some Amharic words,” he says.

Mentioning that he’s been using other reading software and that they have similar drawbacks as well, Million believes that the flaws can easily be improved over time and usage. “I had a discussion with an artificial intelligence professional who told me that the sounds installed on the device are pre-recorded and assembled in pieces and that missing or misreading alphabets while reading could occur,” says Ezra.

The fact that the device needs adequate light to read properly is indicated as an additional problem as visually impaired people cannot often realize if there’s enough light in the area.

It has just been a year since the device has been distributed to Ethiopian users and such shortcomings are expected, experts say. They believe it can easily improve with time.

“The flaws are there, it’s true. But I appreciate the fact that technology has been put to such use customized to Amharic speakers. OrCam MyEye’s other remarkable feature is the sound of the reader has a human tone, not an artificial one. For me, that is a great success. It would be good and enhance the service if the Amharic reader has an optional man’s voice as it only has a woman’s,” says Million.

In Ethiopia, there are more than 6 million fully and partially blinded people, according to a 2021 report by the World Health Organization. Among these, 3/4th of them are fully blinded and because of lack of access, most of them are not able to benefit from reading materials prepared for the blind.

OrCam MyEye has brought new hope for Ethiopian blind people who have immense limitations in their education as well as their day-to-day life. The Office of the First Lady is hailed for taking to the initiative to bring this device to Ethiopia. Many hope that more devices will be brought for others as well.
____________

More than 104.4 million USD (19.9 percent) was generated in the last six months than the same period last year.

Ethiopia preparing to launch its third satellite into space