The lake is found 9 km away from Butajira town, the distance from the upper water level up to the rim is 120-130 meters high, 880 meters wide.

Jamal Hassan lives near Hare Shaitan, an awe-inspiring, otherworldly crater lake in the Silte zone that is fast becoming a popular tourist destination. Jamal was born and raised here and recalls that his family used to not allow him to go and visit the lake when he was younger.

"Now we visit it as often as we want because we have grown up. We stand on the shore of the lake with my friends and throw stones down, but it is so far down we can't see them landing on the water," he says.

Hare Sheitan, literally translated as “Devil’s Water”, is located 3.4 km away from Kibet town in the South Region. It is also nine km away from the town of Butajira on the major asphalt road to the south.

The Silte zone is just about a hundred and a half km south of Addis Ababa, the capital city of Ethiopia. It’s a zone home to 1.2 million people, with 98% of them being Muslims.

The lake, with deep green colors, has a round shape having been created by a volcano thousands of years ago. The distance from the upper water level up to the rim is 120-130 meters high, 880 meters wide.

Due to the legends told about the lake, many visitors are increasingly visiting the site.

Visitors say the water changes its color multiple times during the day.

"The red soil between the water and the edge of the well and the green forest are the main reasons for the change in color," says Mohammed Dedgeba, from the Culture and Tourism Department of Silte zone.

There is a chance that the water color will turn blue on the 15th day of the month while it occasionally gets red during the week, according to Mohammad.

There is no documentation indicating the exact time this crater lake was created but it is believed to have been several millennia ago.

Mohammad told us that Hare Shetan can be translated as Smoke Incense. However, there are others who stick to its original name - Devil’s Water.

The myth behind the creation of the lake is one reason for its name. One story is that the place used to be a flat plateau prior to the volcanic eruption which ultimately created the lake. Once upon a time, a sheik called Nur Hussien came to the area. But the people living in the area at the time didn’t welcome him. For this reason, Sheik Nur cursed the surrounding area. Ultimately, the flat field started sinking, water began to rise and covered the receding land. That’s how Hare Sheitan was created, at least according to legend.

The other myth states that the area used to be mountainous. The devil used to live amongst these hills. A muslim religious leader cursed the devil to go away and at that moment, the earth opened and swallowed the devil along with the hills. The opening is still there, according to this particular myth, and the water erupting following this incident is called the Devil’s Water.

The people in the area still talk about these hypotheses. Those who believe these tales don’t go near the lake. They don’t use it for swimming or fishing. They also don’t allow their children to visit it, just like Jemal told us.

Jemal says he grew up scared of the lake. “Our families would tell us that we could die if we get closer to the water. They said the water is cursed.”

The amount of water on the lake increases at its own pace, unlike other water bodies that have water levels increase during the rainy season. Mohammed says the water on this particular lake originates from rocks below the surface.

“From a scientific point of view, they say that the formation of the lake can be caused by a volcano, which is one of the internal forces of nature. People who have lived in the area for a long time say that sometimes the water smells like burnt oil.”

The zone itself is located within the great rift valley that crosses Ethiopia diagonally from the North East to South West. There are hot springs, natural caves and hills in the vicinity of the lake. 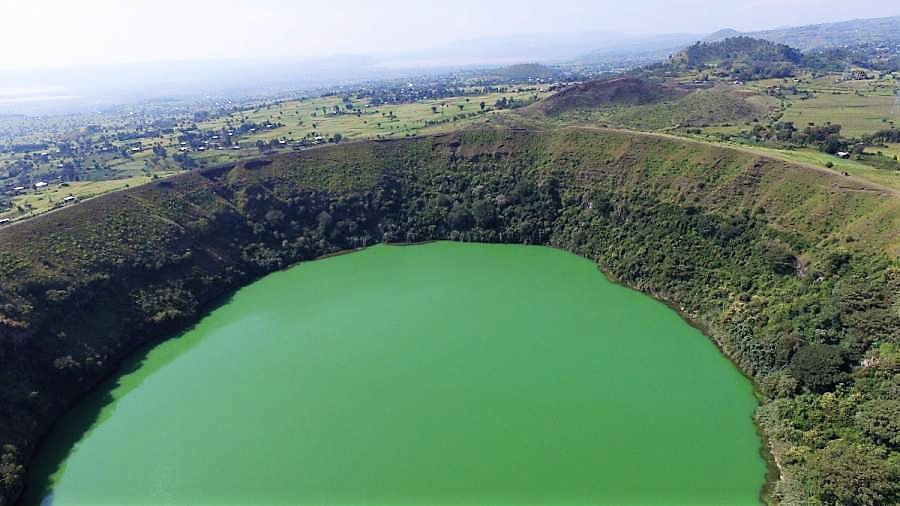 “Local and foreign visitors frequent the place,” says Mohammed, though he admits it needs further publicity.

It is said that although various works are being done by the city administration to develop the tourist attraction, it is not getting the proper benefits from the sector due to the inability to promote it as required.

It’s just 3 to 4 km away from the major asphalt road and interested visitors can access the lake by walking or driving up. However, there are no shops or any shelter that can accommodate tourists. The nearest town where tourists can stay is Butajira.

"Studies should be done on the lake so we can find out more about it," said Faris, a resident of the city of Kibet. Faris also suggested for a road to be constructed near the lake in order to make the lake easily accessible to tourists.

“We are working to increase the number of visitors to the lake. One mechanism is that we are trying to legalize the scattered tourism associations in the area and charging them as per the number of tourists they entertain,” says Mohammad, indicating that this will be realized in the 2022/23 fiscal year.

Mohammad hopes this system will help the zone get what it should obtain from Hare Shetan.

In the 2021/22 fiscal year, 36,441 tourists visited the various attractions in the zone, including the lake. In the current fiscal year, more than 40,000 visitors are expected to visit.
Edited and co-written by Hiwot Walelign

Amanuel became the winner of the 2022 World Press Photo Contest with his storytelling photographs about the war in Northern Ethiopia.