The shopping done by hundreds of consumers and sellers at the market may make someone wonder this is actually a legal trade; not contraband.

Million Gizachew, a customer we met at the second-hand clothes (Bonda) market in Hawassa, was dealing with the seller about the fare with a shirt draped on his left shoulder and a pair of trousers in his hands. We asked him about his experience at the Bonda market.

“There’s an Ethiopian saying that goes: A person’s life reflects his house, not his neighbor's. I know what I earn monthly. I can’t afford to buy new clothes. That’s why I'm coming here,” he says.

Million bought two pairs of trousers, two shirts, and two sweaters along with a t-shirt for a total of 1,000 ETB. This money probably buys him only a pair of trousers if he goes to a boutique that sells new clothes.

Used or pre-owned clothes that are donated to charities or textile recyclers enter the market in developing countries at very low prices. Hawassa hosts such market called the Bonda - clothes market. These markets are popular as many frequent them because they can’t afford the cost of new clothing.

Bonda is a name given by traders to mean hundreds of clothes tied together. Bonda is a word given to a metal strip used to tie together items bonded and designates a bale of clothes wrapped with a metal strip. The name shows that it’s wholesale trade.

These illegally imported second-hand clothes reach Hawassa, passing through different routes, mainly entering the country via the Moyale border. Known to have created job opportunities for many people, the Bonda market supplies affordable, used clothes that are sent from western countries packed in bales.

Every year, according to the UN Statistics Division, millions of tonnes of used garments reach the African continent, including Kenya, the Congo, and Nigeria. Since 2019, Rwanda, Uganda, and Tanzania have tried to stop imports

Addis Zeybe's reporter in Hawassa, a city in the Sidama region (Southern Ethiopia), has visited the Bonda market, which is only open two days a week: Wednesday and Sunday. The Bonda markets start at 5:30 am at daybreak lasting until 7:00 am at dawn. This is mainly because the regular market will be open in the area after 7:00 am, taking up the space.

The crowd and commotion at the wide, open market that is often held in front of Hawassa City Industrial Park give the area a festive atmosphere.

The shopping done by hundreds of consumers and sellers may make someone wonder if this is actually a legal trade; not contraband.

Alemitu Bezabh, a woman we met at the market, told us that she came early in the morning to buy clothes for her son and herself. “The price of new clothes is up to 800 ETB. I can't afford that. But here, I can buy the clothes I want at a low price," she said, explaining that she bought adult clothes for 150 birr and children's clothes for 50 ETB.

Cars carrying the Bonda clothes tied together depart from Kenya’s Mombasa port and pass through Moyale, the border town of Ethiopia, stop at a town called Yabelo, and then enter a town called Bule Hora before it reaches Hawassa. Generally, it takes 496 km to travel from the starting point to Hawassa, which is the final destination.

To enter this business, one is expected to have a minimum capital of 5,000 ETB. Some say they start with less. Most of the Bonda traders start by buying clothes from the Bonda market and selling them on the street until they save enough (more than 20,000 ETB) to get into the major business.

In addition, it requires renting a spacious house to store the clothes and making connections with businesspeople in the border town, Moyale.

Apart from the money, the traders say they need luck to succeed in this business for some Bondas are poor in quality. When they receive the Bonda clothes, there is no means that they can check every cloth to see if it’s sellable. This makes some beginners lose their initial capital.

Retailers who buy clothes from the Bonda market say that they often suffer losses. Solomon Bekele mostly buys kids’ clothes, as worthy as 24,000 ETB at times. “I buy more than a hundred packed clothes without unpacking because it is impossible to choose. My desire is to buy them all, but after I bring them home, I sometimes find clothes that are useless and torn, and I face a loss in terms of the cost."

Addis Zeybe's reporter's attempt to contact the drivers who transport Bonda was unsuccessful. However, he did meet with the importers. Bereket (his name changed), one of the importers, says, "I receive clothes from my brother in Bule Hora in the Oromia region. He brings in the clothes from Kenya.”

Bule Hora, which is 194 km away from Hawassa, is a town to find clothes and electronic goods at low prices, imported by contrabandists.

According to Bereket, most of the clothes he brings to Hawassa are kids' clothes as they are cheaper and have higher demand in the market. “I buy them for 50 ETB and sell them to traders or consumers for 150-200," he explains.

Since the profit is lucrative, the traders endure any impediment they may come across in the line of their work. Bereket recalls his property was confiscated twice by border guards. “It was a huge drawback to my work but I understand what I do is an illegal business. So such things are expected.” 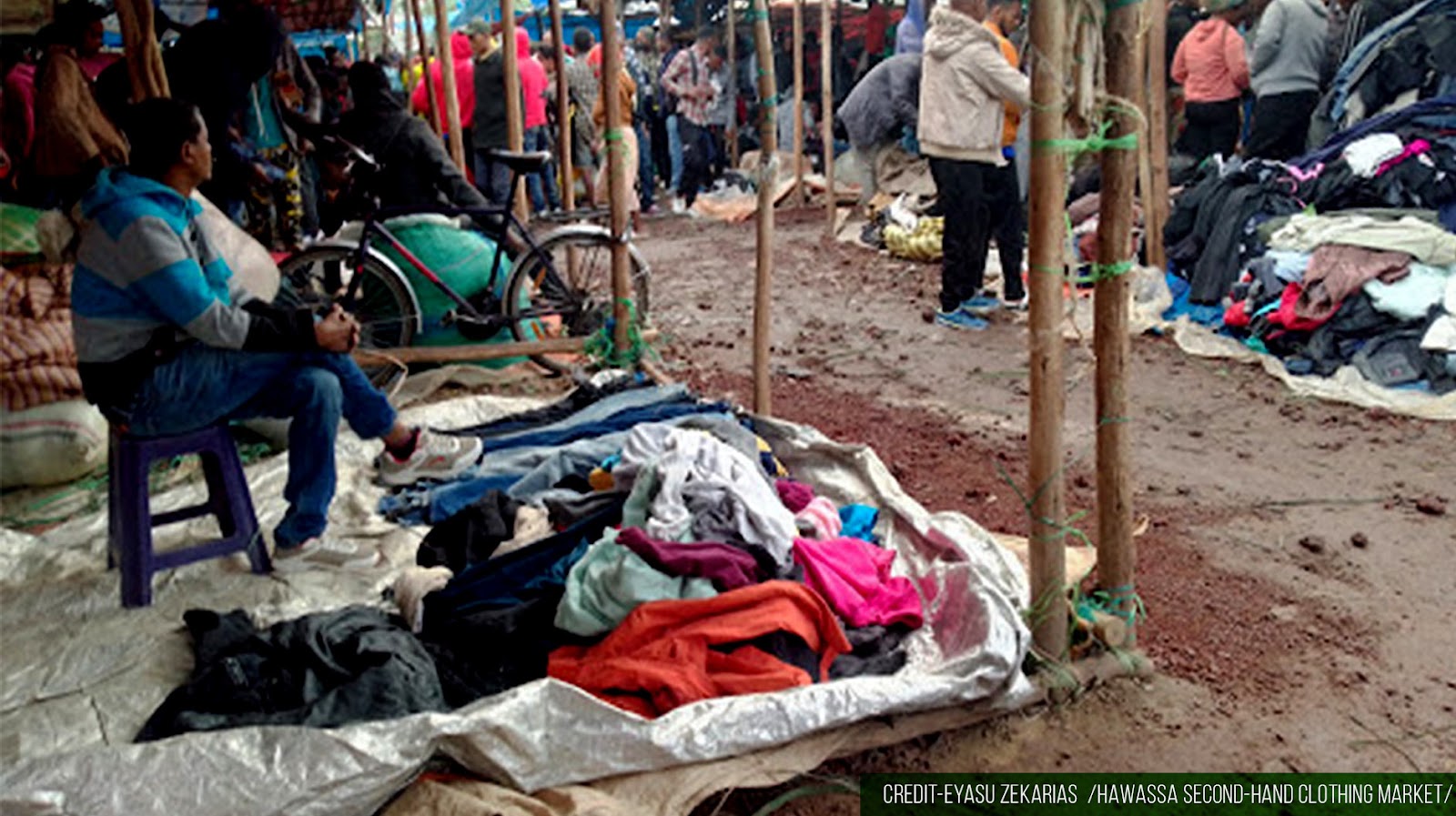 When you come to the early morning Bonda market on Wednesdays and Sundays in front of the Hawassa City Industrial Park, you only need 50 to 200 ETB to buy clothes. However, if you prefer washed and ironed ones, you might want to have more money as the price doubles.

The Bonda wholesalers and retailers confide that the business of second-hand clothes has changed their lives as it is profitable, even though it is difficult and needs patience and endurance. Starting with a small capital and building a reliable business is a story many traders share.

Mohammad has spent two years in this business. He receives Bonda clothes at the border from brokers every Friday and sells them in Hawassa on Sundays. He told us that it’s a risky business and sometimes they spend nights hiding off roads to avoid confiscation.

“We are always in fear when we bring the clothes to Hawassa. Sometimes, we pay up to 1,000 ETB to the border patrols to let us pass. Other times, all our properties get seized. But most of the time, luck is with us as we start our journey with tip-offs about the road,” Mohammad says.

The customers also say that they need this business to sustain as the market provides them with affordable clothes in good conditions, though used.

“I feel like less of a person whenever I come to this market. But then I see the number of people who roam around the place and I realize it’s not only me who comes here,” says Million, expressing his lack of alternatives and at the same time his discomfort of coming to the Bonda market.

Bonda clothing market is also widely available in Addis Ababa, Adama, and other parts of the country. However, it is believed to widely affect the country’s economy at large, though it supports individuals.

The Hawassa Custom Commission branch has announced that more than 460 million ETB worth of clothes, electronic goods, and medicine were seized in the 2022 fiscal year while being smuggled.
Edited and co-written by Hiwot Walelign, senior Content Editor at Addis Zeybe

The Lommi project took the Ethiopian proverb "50 lemons, a burden for one, a jewel for many", as a motivation.