Queen Fura of Sidama: a scourge of men or a champion of feminism in Ethiopia?

The first depiction is of a queen that stood for women’s rights and attempted to prove that they were equal to men. Women could rule the country, the queen believed, and use their unique knowledge and skills to do anything.

She also advocated for the youth to listen to their elders – and learn wisdom from them. She also passionately believed in dialogue. Queen Fura had brought a different way of thinking to that era, says Tefera.

The other depiction is that of a woman who was merciless to men, especially to some elders who considered themselves to hold superior positions in society.

Queen Fura came to power somewhere between the 14th and 15th century in Sidama, a region in South Ethiopia – which was an autonomous state at the time. She succeeded her husband who was a king before her. The first thing the queen purportedly did after assuming power was to order the killing of the old men, sparing only the young.

According to legend, she believed that the elders only made decisions which favored the patriarchy, oppressing women in the process. She also believed that these men would overthrow her if they stayed alive.

The story of Queen Fura of Sidama is not documented in writing. It is rather a legendary one which has passed down from generation to generation in that locale. Special attention has been given to this remarkable woman over the past 20 years, as part of cultural revival across the region.

Fura is known in history as a ruler who ensured women’s rights, taking it to its ultimate limit – some argue.

Prior to her assuming power, women were abused by men to the point that they were not considered human. She radically changed these existing circumstances by asserting women’s superiority.

Fura is believed to have ruled over the land of Sidama for seven years. There are contrasting stories of her marriage status, but accounts agree that she was married to a very powerful man,  and she succeeded him. Some accounts claim that she had a daughter called Laango.

There are two reasons mentioned for Fura’s very hostile stand against men: one is that they killed her husband and baby boy, the other is that she witnessed their cowardice on the battlefield, seeing them retreating.

Oral tradition asserts that what gave Fura the determination that women were better than men, going beyond equality, is the fact that she won battles, fighting with women alongside her, not men.

Her rule became fearsome after she successfully led battles rallying women behind her.

Tefera says the queen was considered unique even from her early days.

"Queen Fura's title is (Motite), which means Queen or Mistress. She had been considered knowledgeable since childhood and has brought solutions to problems. People went to her for advice.”
The Queen was known to have given notorious advice to women about their relationships with men.

“She used to tell them not to share everything they knew with the men in their lives. Her recommendations were not ill-motivated. She believed women would avoid fighting with their husbands if they did what she advised them. She wanted to minimize domestic abuse of women with such methods. Some Sidama women “still consider her words to be worthy of applying,” says Tefera.

Ayelech Abraham is a resident of Hawela Tula sub-city of Hawassa, the capital of the Sidama region. She says that she grew up listening to the legend of Queen Fura since childhood.

“My mother used to hide things from my father when I was little, and she used to say it was Fura’s teaching. That used to be a source of disagreement between my parents,” Ayelech recalls with a smile, noting that what Fura recommended to be a pacifying method would actually backfire sometimes.

Still, Fura's administration gave women more power than men. She was a tyrannical leader who brutally tested and harassed men, according to stories. Legend has it that she used to oppress men by giving them orders that were impossible to achieve.

Among the orders she gave men knowing well they couldn’t complete were: to build her a house between the heavens and the earth; to fetch her fresh cow milk from a distant place that takes long to travel; to fetch water from a river with a sieve; to split a single thread of her hair into six threads… and so on. When the men couldn’t do what she ordered them to do, she would use their failure as excuses to execute them.

However, one old man escaped her execution and hid himself; ultimately causing Fura’s death. He knew she wouldn’t spare his life if she found him and plotted her death.

The old man advised her followers to tell her to ride a giraffe when he heard she was looking for an animal, faster than a horse.

Fura wanted to ride over the land she ruled. Her followers brought her the giraffe after she agreed, and tied her with a rope so she wouldn’t fall while riding.

The animal rode on, unstoppable, killing the queen at last as she couldn’t control it.

Sidamas believe the legend that says some of the queen's body parts fell off the giraffe she was riding on, at different places, as the animal sprinted at a high speed. Some places in Sidama have names with meanings of body parts: Oun - head, Godubore - guts, Leka - legs, Anga - hand.

It is said that the remains of the queen were collected and buried in Loka Abaya district of Sidama region. The cemetery is still visited by men and women of Sidama, with women applying butter on the tombstone to pay their respects.

Seyoum Hameso wrote an article on Queen Fura in 1997 in a journal at Thames Valley University. He elaborated on the polarity of perspectives towards Fura among Sidama men and women.

“Their [women’s] feelings are profound so much so that at the end of any mourning procession, they mourn for Fura too. But men? Not so! The feelings among men run to the contrary; they recoil in disgust as they remember the severity of her authority.”

Claiming he had carried out his research based on reputable Sidama elders' accounts, Seyoum pointed out that men refused to call her Queen of Sidama. Instead they called her Queen of the Women - Mentu Biilo.

“The radical changes she initiated in society and the oppressive policies she pursued brought her deep dislike among men.” 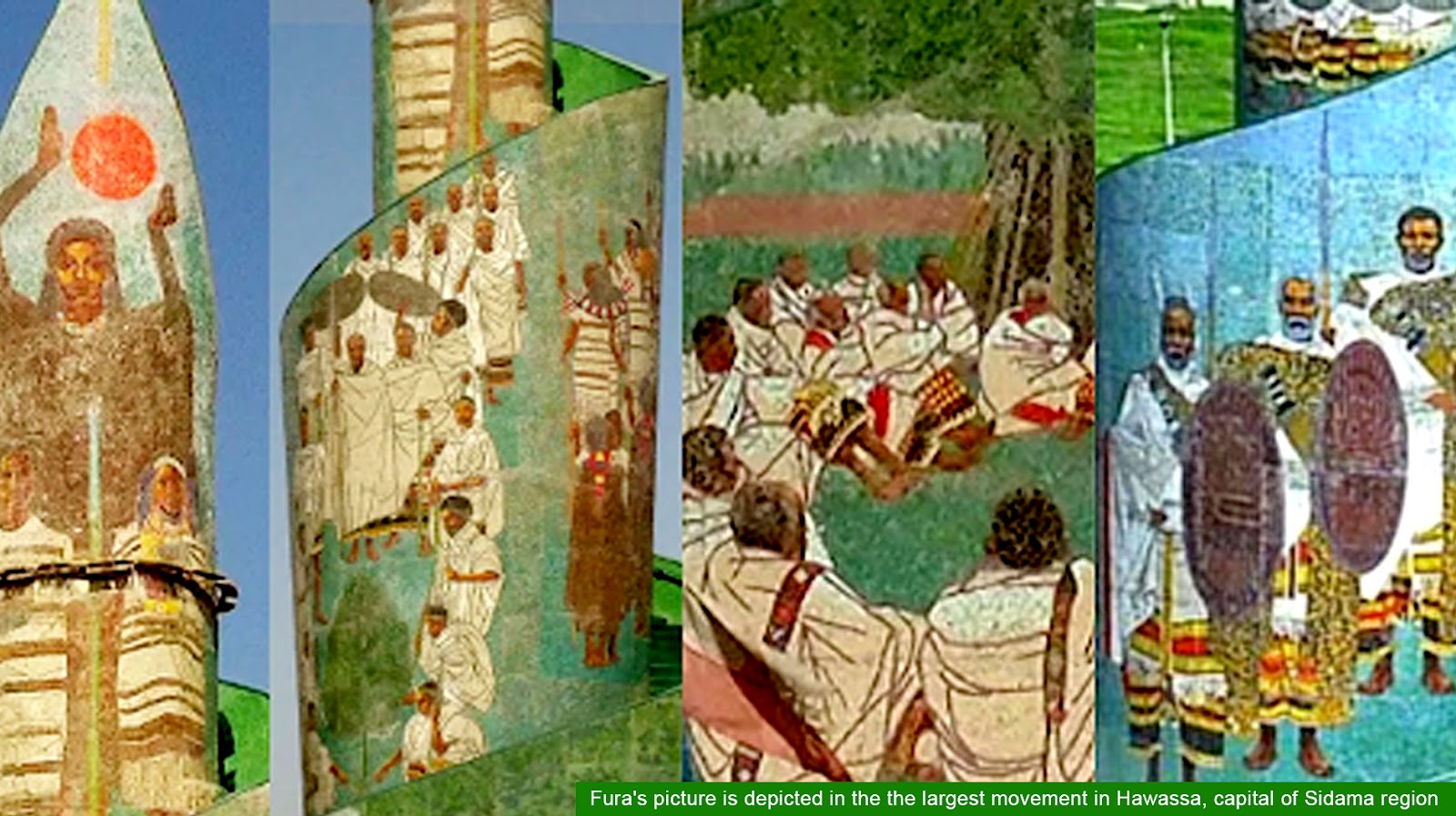 Though Fura was killed by men who plotted her death, she has ironically been immortalized by their folk songs.

Men ground and cooked for women,

Her shoulders dropped in Qorke,

Her remains dropped in Kurraa,

Let her finish there,

Women, on the other hand, still recall her fondly and mournfully in their lullabies when they put their children to sleep.

You are my best child,

For they killed the best, Fura,

You are the leader of women.

The story of Queen Fura has been revived in the past two decades, says Tefera, noting that it is still not properly organized and documented.

Institutes, schools and colleges are named after Fura in recent years.

A 1996 compilation of oral stories entitled Ethiopian Folktales included the story of Queen Fura in its South Ethiopia, Sidama, section. It was a project by Elizabeth Liard, a British writer of Children’s fiction and travel.

An Amharic novel was also written entitled Queen Fura by Teshome Birhanu which is a fictional work based on oral tradition accounts.

However, Tefera Ledamo believes more should be done to recognize the peculiar queen that ruled over Sidama centuries ago.

“If anything, she should be acknowledged as a champion of feminism,” Tefera concluded.

A mosaic image believed to portray Fura is painted over the Sumuda monument at the heart of Hawassa town.