Among the dis-informative issues, last week was a kind of claim that is rare in the Ethiopian social media landscape. It’s about Covid-19 vaccines. A Facebook post appeared last week and claimed that Covid-19 vaccines contain bacteria. It also recommends people not get vaccinated.

The post was viral and promotes vaccine hesitancy. Such posts and unfounded allegations are a threat to the healthcare system and well-being of society in general. 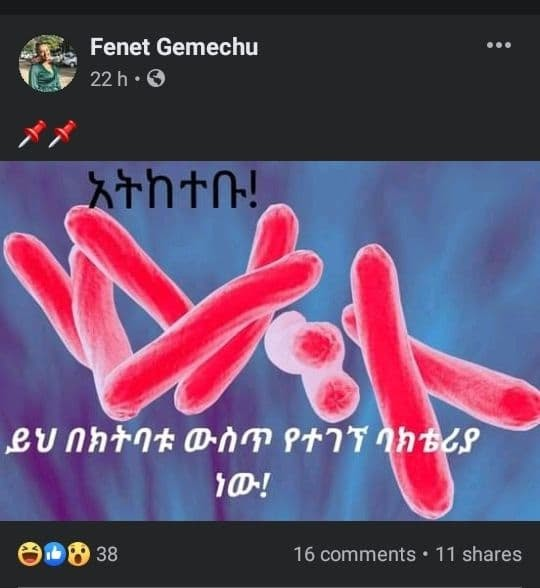 HaqCheck, however, looked into the case and confirmed that the claim is FALSE. The photos in the Facebook posts are not images taken from vaccine samples. They are taken from an article on the Tuberculosis Foundation Website, entitled “What is Tuberculosis?”

Additionally, the safety of the Covid-19 vaccines has also been confirmed by repetitive clinical trials and by various governmental and intergovernmental research institutions.

Another claim that emerged last week was a report that a bulk of ammunition was seized in Addis Ababa during a raid. The Facebook post emerged on Nov 16, 2021, sharing two images to support the claim as if the ammunition shown in the pictures was recently seized in Addis Ababa. The post has received close to five thousand reactions, over five hundred shares, and more than five hundred comments at the time of this publication. 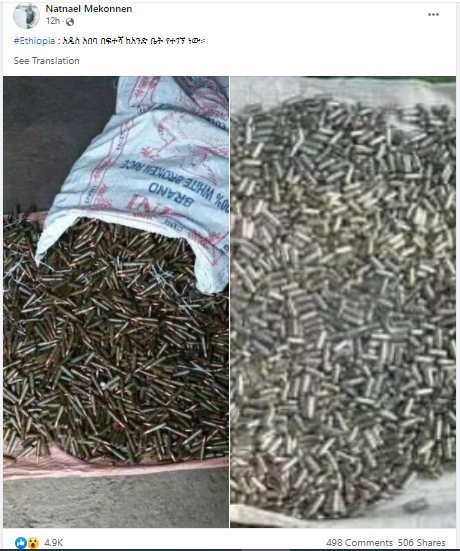 However, HaqCheck fact-checked the claim and confirmed that the images in the post do not show a bulk of ammunition recently seized in Addis Ababa during a raid. The images were taken from a previous publication eight months ago. The first image in the post was taken from an article by Fana Broadcasting Corporation Afaan Oromoo page that reported ammunition was seized by the Kombolcha branch of the Ethiopian Customs Commission issued on Apr 15, 2021. The original image can be accessed here.

The second image posted to support the claim was first published in a Facebook post on Apr 16, 2021, with a text explaining that two individuals with over 5,000 ammunition were apprehended in Kombolcha. The original Facebook post can be found here. The post is confirmed FALSE by HaqCheck due to its use of inaccurate images to prove the claim.

Ammunition found inside the headquarters of the Orthodox Church synod

Last week Addis Ababa Police Commission announced that it seized a bulk of ammunition in a storehouse inside the premises of the headquarters of the Orthodox Church synod in Arat Kilo.

The police Commission released three images that show a bulk of ammunition.

Later on, counter-claims appeared arguing that the images were false and are taken from previous posts in Somalia or other parts of the world. Most of the counter-claims came from two groups of social media users; the first group seemed defenders of the Ethiopian Orthodox Church and took the claim by the police as pure defamation against the church. The second group of counter-claims seemed politically motivated and took the claim as a pretext and extension of the ‘ongoing mass arrests against Tigrayans and other dissidents’ to the church.

The counterclaims posted photoshopped images to disprove the originality of the images that were posted by the city’s police and claimed that they were taken from Somalia. The counterclaim posts were later deleted. However the counterclaim images were found to be false and manipulated. 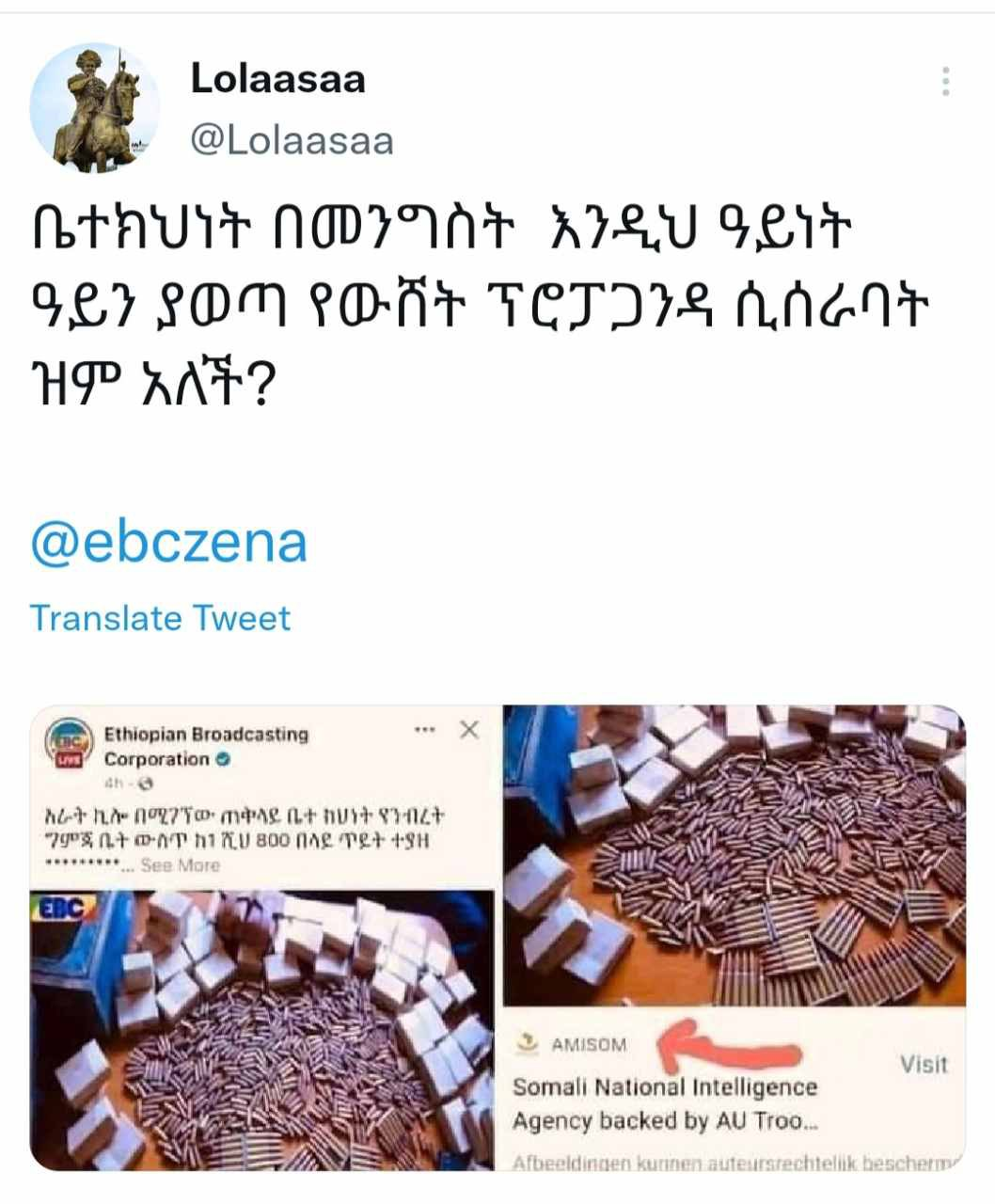 A day later, the police commission released a short video clip to prove the originality of the images. The controversy subsided later on after the police published the video clip. 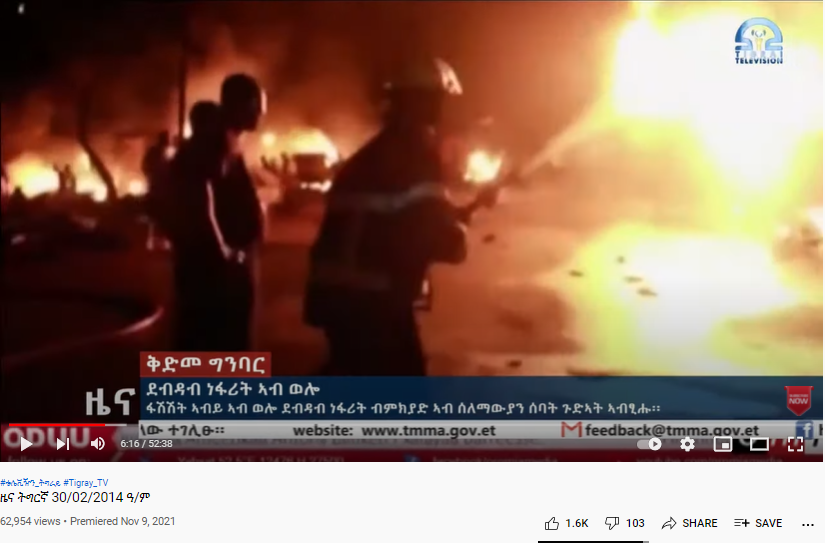 The YouTube video had more than 73 thousand views, with more than 1600 reactions. However, HaqCheck analyzed one of the video footage used in the news report and rendered it False.

The video released by Tigray Television used footage featured in a report by Oromia Media Network (OMN) in support of the news that the Federal Government used drones in its bombing in Wollo.

HaqCheck interrogated the video using a screenshot from the footage and found out that the video was released on Nov 6, 2021, on the official AFP News Agency YouTube channel showing a massive explosion of a petroleum station in Freetown, Sierra Leone. During the incident at least 92 people were dead. According to witnesses, the accident happened when a vehicle in a car accident caught fire. The flames then spread, burning people in cars and on roads nearby.

Last week Aljazeera published a video clip on Facebook with a title that reads, “Thousands of Tigrayans arrested in Ethiopia”. The text along with the video clip explains that thousands of Tigrayans were being detained in Ethiopia as part of a government crackdown on suspected supporters of the rebel forces. It also showed a video of local vigilantes in an unidentified place somewhere in Addis Ababa and stated that they were looking for Tigrayans.

As the conflict has escalated, the Ethiopian government declared a six-month state of emergency. It also called for the residents of Addis Ababa to protect their neighborhoods.

As per the call from the government, it’s now becoming common seeing local vigilantes guarding their neighborhoods and nearby streets. The intended objective of the call and the vigilantes ask passersby to show their identity cards to identify infiltrators.

The video clip and embedded message were controversial and seen by tens of thousands of viewers on Facebook.

In a bid to help Twitter users identify fake news and misinformation, Twitter has redesigned and launched new warning labels last week. The new labels will be embedded in false and misleading tweets.

The new labels will be used for manipulated media contents that cause real-world harm, election and voting-related misinformation, and false or misleading tweets related to Covid-19.

HaqCheck urges social media users to be mindful of the contents across the platforms and be cautious of possible false or misleading information. They have to avoid simply receiving information as reported or narrated.

We recommend that the government should provide the public with up-to-date and sufficient information regarding the ongoing issues. It should also permit open and unfettered access to information to media outlets and journalists. Information disorder flourishes in darkness in which there is no or limited information to the public and the media.

HaqCheck urges social media influencers to be more responsible and refrain from spreading dis-informative and hateful content. International media outlets should also consider the fragile situation the country is currently in. They should avoid exaggerated and toxic content in their reports regarding the country.

PREVIOUS ARTICLETime to enforce the law on foreigners’ recruitment in CSOs?
NEXT ARTICLENo: The image doesn’t show  that Lalibela is captured by Government forces

In the following summary, we cover most of the fact-checked false claims and other misinformative content.

In the following report, we cover the major misinformation and controversial content in October.