This summary covers controversial and misinformative issues in the first month of 2022.

HaqCheck observed that the trend of disinformation and information disorder in the Ethiopian media landscape is evolving and changing. A few months ago, the controversial issues people were talking about on social media platforms were related to the armed conflict in the country.

Nowadays, this issue is no longer the sole and main factor for information disorder across social media.

Below are the main controversies that caused information flow disorder in the Ethiopian social media landscape and the false claims fact-checked by HaqCheck during the first month of this year.

A claim appeared claiming that Sebhat Nega, co-founder and former chairman of the Tigray People’s Liberation Front (TPLF), celebrated his release with his family.

The caption of the video post reads, “The celebration of the release of Sebehat Nega and Abay Woldu in Addis Ababa”. At the time, the video had more than one thousand reactions, two hundred shares and was viewed by over 81 thousand users. 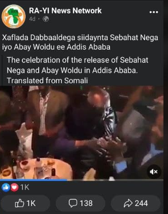 However, the video was old and taken from previous publications. HaqCheck interrogated the video clip and found out that it was posted four years ago on YouTube. The description of the original video clip on YouTube claims that Sebhat Nega was celebrating a birthday party with his family in Addis Ababa.

HaqCheck fact-checked a claim that a military truck belonging to the TPLF was destroyed by the Ethiopian army near Humera. The post stated that TPLF launched an attack on the Humera front during the Orthodox Christmas and action was taken in response by the government. Other Facebook pages also posted the image with the same claim. 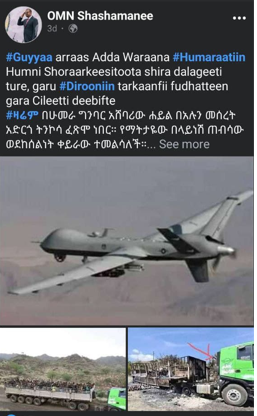 However, the image accompanying the claim was false. It was posted on Dec 26, 2021, on a website with a claim that the truck was destroyed by TPLF forces in Kombolcha town, Amhara Regional State. Therefore, HaqCheck rated the post FALSE.

There was a controversy regarding a document allegedly drafted by the Ethiopian government. Based on the alleged document, many claims appeared that the government was preparing to disarm the Amhara militia (a.k.a Fano) in the Amhara Regional State. 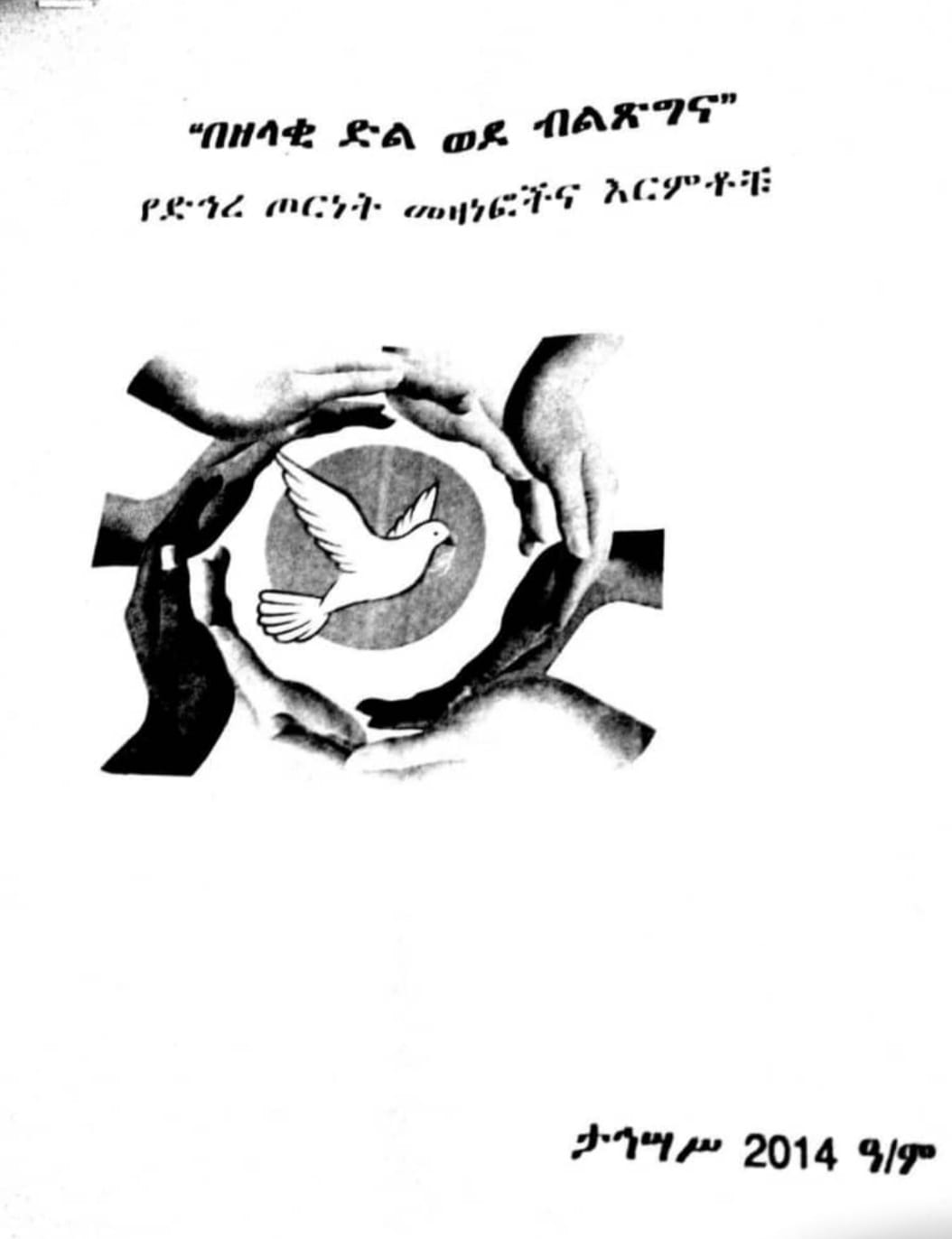 The Amhara Prosperity Party issued a defensive statement that the document circulating on social media was somewhat altered. It explained that part of the document that elaborates the contribution of the Amhara people during the war with the TPLF was intentionally cut out of the document.

Besides, the Amhara regional government said that the claim that the government will disarm Fano (armed militia) is false.

Orthodox Epiphany not celebrated in Tigray amid fears of aerial attacks

Claims that the annual Orthodox Epiphany celebration was not held in Tigray due to fears of aerial attacks appeared on social media. On Jan 19, 2022, a Facebook post appeared claiming that the Orthodox Epiphany was not celebrated by the believers in Tigray amid fears of drone attacks. The post received over a thousand reactions and was shared close to a hundred times. 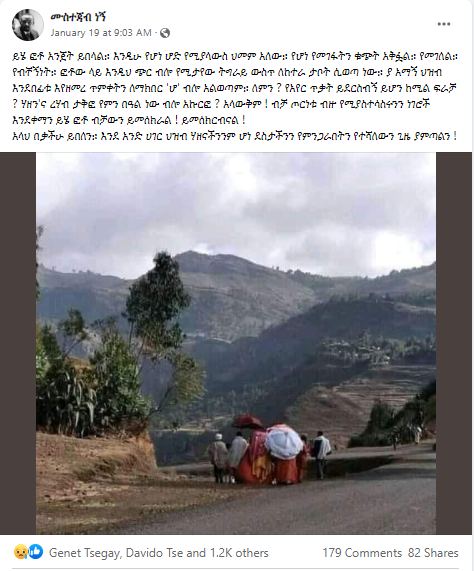 Counterclaims also emerged claiming the image was old and doesn't prove that people in Tigray abstained from attending Epiphany celebrations because of the aerial attacks.

There were claims that an image of a map merging Ethiopia and Eritrea as one country appeared during Epiphany celebrations in Addis Ababa and other areas.

A viral tweet was made with the claim that the map in the image appeared during the Epiphany celebration in Ethiopia and cautioned people to stop such acts since it undermines the sovereignty of Eritrea.

The tweet was retweeted over four hundred times and was seen by many users on the platform. 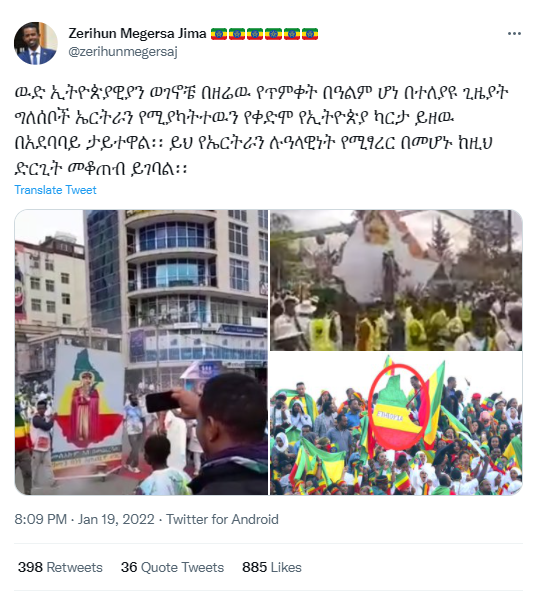 The tweet shared three images to prove the claim. However, one of the three images was false and taken from publications years ago. The third image was taken from an article published by The National News, a United Arab Emirates (UAE) based news outlet. The original image was published in January 2019 along with a story entitled, “Ethiopia apologizes after Dubai marathon fans 'erase Eritrea from map”.

Controversial images and claims had emerged last week following the information that the premises of the Bahir Dar office of the Ethiopian Islamic Affairs Supreme Council had been smashed on the eve of the Epiphany holiday. A Facebook page with the name of Ethiopian Islamic Affairs Supreme Council shared three images along with the claim that the compound was destroyed by the mobs who were celebrating the holiday. 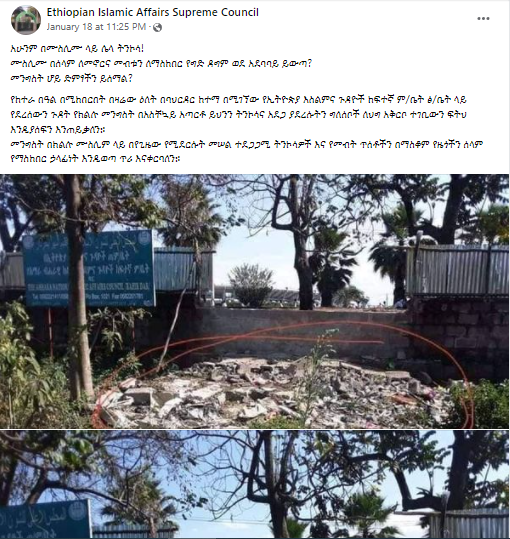 However, many posts appeared counterclaiming that the images shared don’t prove the alleged claim that the premises sustained damages by attendees of the Epiphany celebration.

On Jan 19, 2022, a Facebook post emerged with a refutation that the images show when the compound was demolished for reconstruction purposes. There also emerged a similar counterclaim alleging the images were old and show the premises during reconstruction. 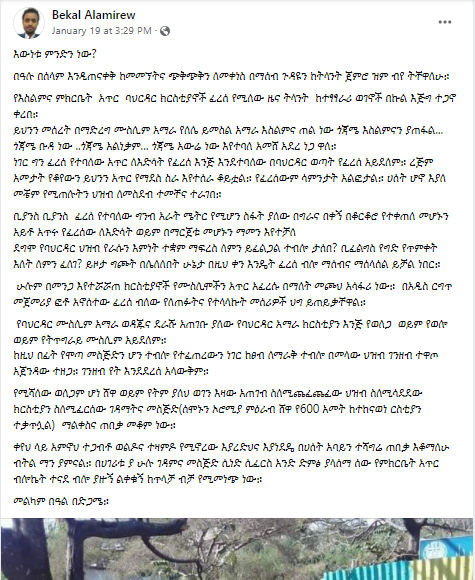 A Facebook post was published with three pictures to prove the claim on 17 Jan 2022, that Fano and local militia checked the movements of the departing federal government army in Kobo, Amhara Regional State. According to the post, the federal army was leaving the area under the command of the Ethiopian army Chief-of-Staff following the approach of TPLF forces which supposedly intended to re-control the town.

However, two of the three images were learned to be falsely taken from sources dated 4-8 years ago. 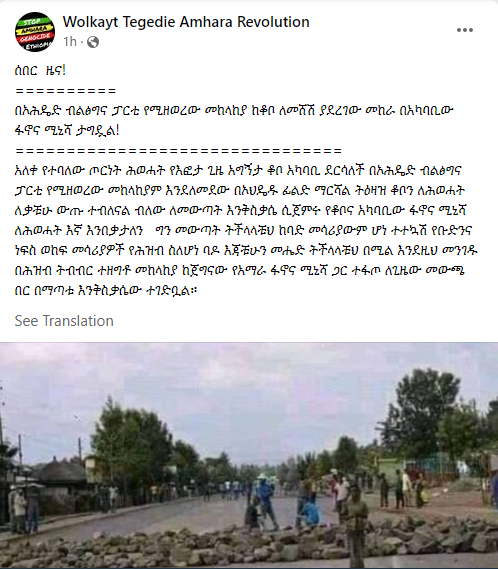 The first image was first posted on 16 Dec 2015 in an article about the youth protests against the rule of the EPRDF regime. The link to the first image can be found here.

The third image out of the three images was taken from a Facebook post in Mar 2019. The post shared the image with a claim to show people blocking the road that connects Bahir Dar and Hamusit. Here is a link to the original image.

However, we could not find the second image that is shared to support the post’s claim.

There have been many reports that the regional states of Oromia and Somalia are hit by severe drought. Addis Standard recently reported that many woredas in East Showa and Hararghe Zones of Oromia were affected by drought. Furthermore, 6,398 children, 9,078 women, and 2,226 elderly people have faced severe health problems associated with malnutrition due to a drought in the Borana zone of Oromia regional state.  The drought killed 7,540 cattle and some 13,641 cattle are moving around with the assistance of humans because the drought has weakened them. Many people and cattle have also suffered from drought in the Bale zone, Oromia.

Reports regarding the severe drought in the Somali region have also been coming out. According to a report, the drought which affected many woredas has killed thousands of livestock.

Despite the facts, many old and false images were tracked circulating on social media platforms with claims of the ongoing drought in Oromia and Somali Regional  States.

Here are some of the posts that have shared old images claiming to show the drought in Somali and Oromia Regional States. 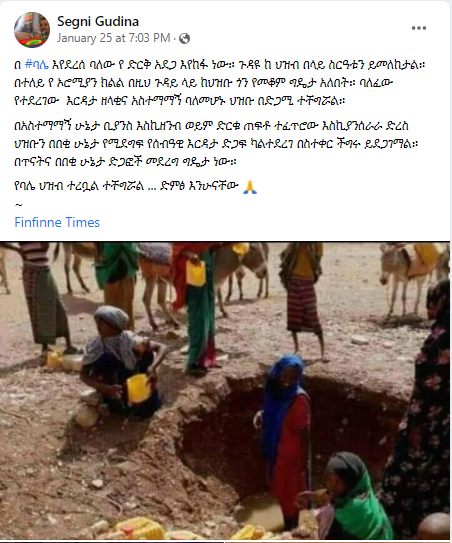 The above post shared an old image claiming that a drought in the Bale Zone of Oromia is looming and people are starving due to the emerging drought. But the image is taken from a report published in 2018. 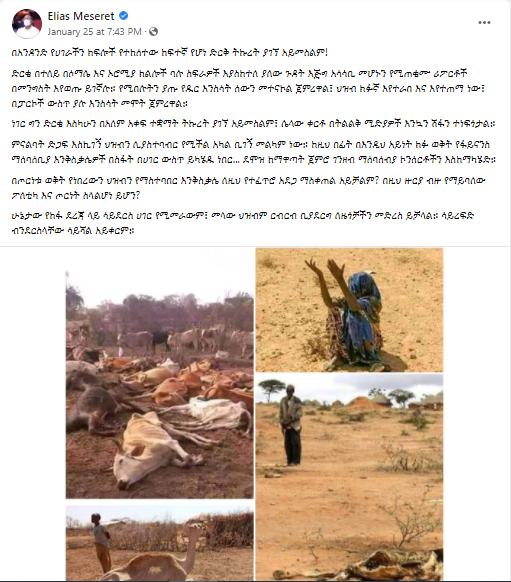 This post claimed that drought has occurred in Oromia and Somali regions. However, the first picture of the four images in the post is old and was taken from a report regarding drought in Somalia and Kenya. 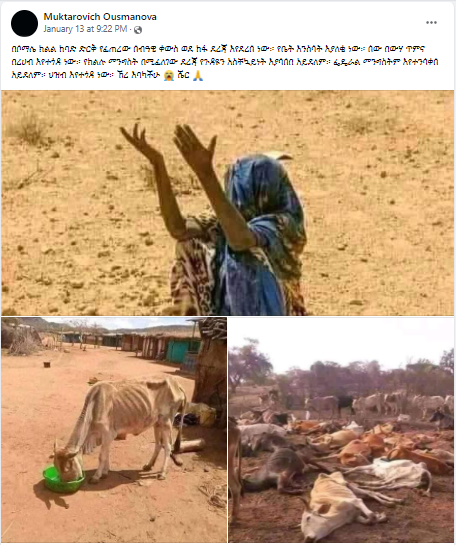 This  Facebook post also claimed that drought occurred in the Somali regional state. It shared three images in support of the claim. But, the first image was taken and cropped from an image in a report published in 2019. 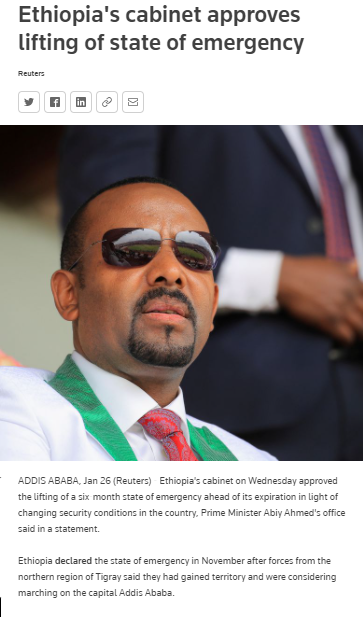 On Jan 26, Ethiopia’s Council of Ministers passed a proposal to end the state of emergency declared in November last year to be submitted to the House of Peoples’ Representatives (HPR) for approval. Following the statement, Reuters came out with a news article that Ethiopia's cabinet of ministers lifted the state of emergency.

It is true that the Council of Ministers approved a proposal to end the state of emergency. But the cabinet has no legal mandate to lift it by a decision without the approval of the HPR. Hence, the cabinet sends the proposal to the HPR for ratification. 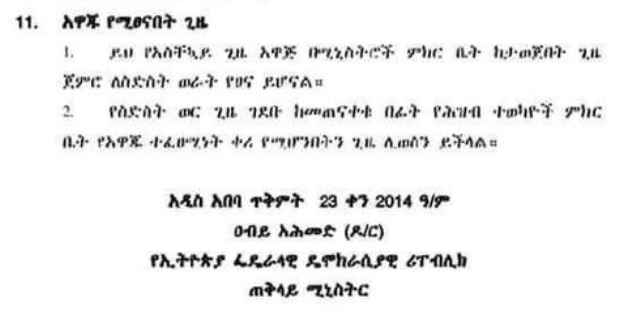 Therefore, HaqCheck fact-checked the claim and found it MISLEADING.

There were also false images on social media, particularly Facebook, supposed to be supporting claims of the fresh fighting between TPLF forces and Afar regional armed forces.

A Facebook post was shared more than 50 times since it was published on January 25, 2022, on a page with more than 62,560 followers, which mostly features pro-Afar content. The post generated 1,200 reactions. A picture attached in the post shows a bulk of ammunition. Written in Amharic, the caption reported that Afar troops recently seized firearms from Tigrayan forces.

“The Afar are receiving the weapons the Junta is handing over,” reads part of the caption. Junta refers to the Tigrayan forces, while Afar is a neighboring region, which allies with the federal government against Tigrayan troops. 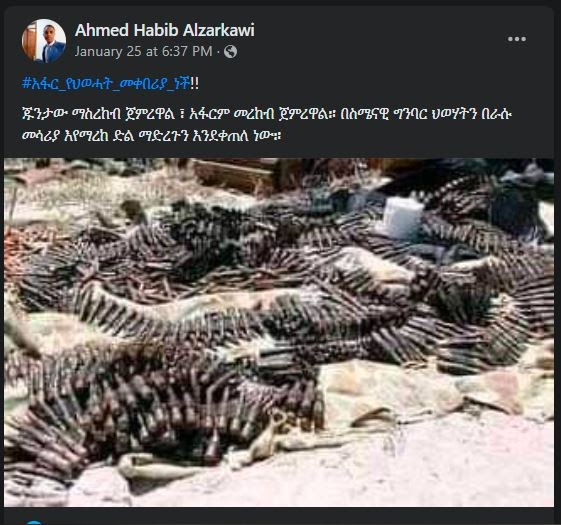 However, HaqCheck confirmed that the image shows weapons recovered by the African Union Mission in Somalia (AMISOM) in August 2014. Even though the image shows ammunition, it is old and unrelated to the recent conflict in northern Ethiopia. Therefore, HaqCheck rated it FALSE.

HaqCheck recommends international media outlets be careful and accurate while reporting. They should make rational and professional explanations of the subject matter under discussion rather than leaving readers in the dark.

Social media users should be conscious of the origin and intention of unverified information posted on social media platforms. They should question the authenticity of the information before they read and share it with others.

HaqCheck urges concerned government authorities to offer sufficient and timely information to the public and the media. There should be regular frameworks to deliver up-to-date information.