Last week there was relatively less disinformation than the preceding weeks. New military skirmishes have been reported. But unlike the past, where there were many false claims when the armed conflict escalated, there have been limited false and controversial claims.

Here is the summary of false and misleading claims and information disorders that surfaced on social media platforms last week.

The Ethiopian Prime Minister Abiy Ahmed (Ph.D.) announced on Monday, Nov 22, 2021, that he would go to the battlefronts to directly lead the war from there. Thereafter, claims regarding government forces controlling the town of Lalibela have come. The town was reported to have fallen under the control of Tigray People’s Liberation Front (TPLF) forces since Aug 5, 2021.

However, in the new waves of engagements, claims appeared alleging Amhara regional forces controlled back the town. The claims were supported with an image in a bid to prove it. On Nov 23 and 24, 2021 a series of Facebook posts emerged showing an image that depicts an armed man in the uniform of the Amhara Regional Special Police sitting near the Church of ‘Biete Giyorgis’, one of the prominent churches in the town of Lalibela. 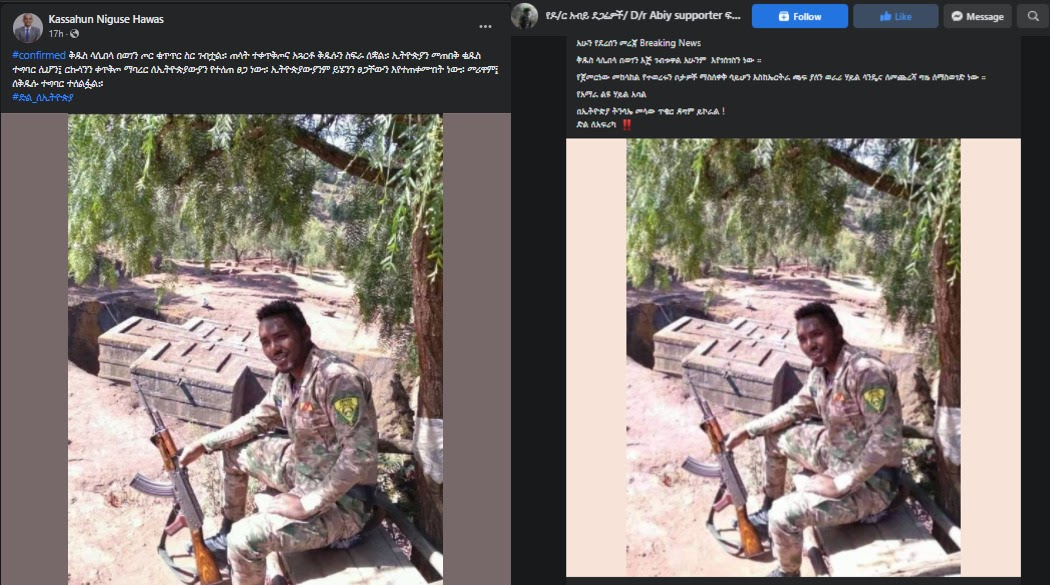 However, the image was false and taken from a previous Facebook post on Apr 29, 2021. The image was previously posted by a Facebook account by the name Wubetu Yigezawu. The Amharic caption of the image reads, “The temples of St. Lalibela are being heavily guarded by the Amhara Special Forces”. 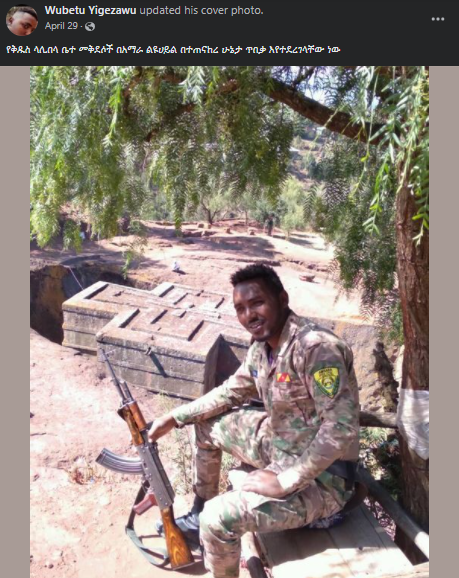 In addition to that, there was no official announcement whether government forces controlled back the town of Lalibela.

Therefore, HaqCheck confirmed the image does not prove that Amhara regional forces recaptured Lalibela, and the claim is debunked FALSE by HaqCheck.

Last week a video was released by a Canadian author and freelance journalist, Jeff Pearce. The video shows an online video meeting attended by Ambassador Berhane Gebrekirstos who claims he is representative of TPLF  abroad, diplomats and ambassadors, scholars, and others.

The two hours and three minutes video was leaked by the journalist. It was a subject of controversy on social media and was reported by many local state-owned media outlets claiming that Eleni Gabre Madhin (Ph.D.) and the others were secretly supporting the TPLF.

Nevertheless, Eleni stated that her participation was in her personal capacity as an Ethiopian yearning for peace, not on behalf of or linked to her office.

A few days before the video was released she stated on her Twitter account that her residence house in Addis Ababa was, disrespectfully, raided by the police.

Later on, she issued a letter and denied that she supports TPLF forces. In the letter, she affirmed that she doesn't accept an unconstitutional change of government and recognized the current government as legitimately elected. She asserted that she did not endorse or support any of the views that were presented at the meeting.

The virtual meeting was organized by a civil society organization, Peace and Development Center International (PDCI) which is registered in Ethiopia and in the US.

On Nov 26, 2021, the Ethiopian Authority for Civil Society Organizations announced that it revoked the license of the organization for violating the laws of the state of emergency recently declared by the federal government.

Another claim that was fact-checked by HaqCheck was a social media scam that issued a supposed opportunity that the Commercial Bank of Ethiopia is offering prizes for those who fill out a questionnaire. The post claimed that the gifts would be presented to potential winners marking the 80th year anniversary of the bank. It has a link that leads to a website requesting to fill out a survey.

The page on the site shows the logo of CBE and has the image of CBE bank Djibouti branch as its cover. The amount of the prize offered after filling out the survey, as it is stated on the sites, is 10 thousand Br. After filling out the questionnaire, it invites users to click on boxes to try to win the prize and commends sharing the link to 5 public groups or to 20 people, entering the address, and completing the registration.

HaqCheck looked into the link in the message and confirmed that it is not associated with the official website of the bank. A Whois search, a domain lookup of the link shows that the link was created on Sep. 24, 2021, and registered in China under the domain name of editjazz.top. Whereas, the correct site of CBE is combanketh.et.

HaqCheck also contacted Biniam Zewde, Social Media Manager of CBE to confirm the issue. The manager said, “the links are just random scams. There is no official campaign or plan launched in celebration of the 80th anniversary of the bank and those messages and links are not from our bank.” He also reminded customers to follow up on such announcements from credible sources including the official website, social media pages, and television and radio programs of the bank. The bank has also been warning its customers to be safe from such scams on its platforms.

Hence, the message circulating on social media platforms and messaging apps claiming that CBE is awarding a prize by filling out a questionnaire is false and is rated as SCAM.

The French state-owned international media outlet, France 24 published an article with the title “UN to evacuate families from Ethiopia as rebels claim advance on the capital” on Nov 26, 2021.

The article explains that family members of international staff in Ethiopia were ordered to immediately evacuate as TPLF forces claim to be edging closer to the capital Addis Ababa.

It also added, “some TPLF fighters were believed to have reached Debre Sina, roughly 30 kilometers closer to Addis Ababa, diplomats briefed on the security situation said.” It misleadingly claimed that the town of Debre Sina is 30 kilometers from Addis Ababa.

HaqCheck, therefore, investigated the claims and confirmed that it was MISLEADING, as Debre Sina is  190 km far from the capital. We checked out the distance between the town which is located in the North Shoa zone, Amhara Regional State, and the capital on Google Maps. The town is exactly 190 kilometers far from the Addis Ababa Municipality Mayor Office as shown on google maps. 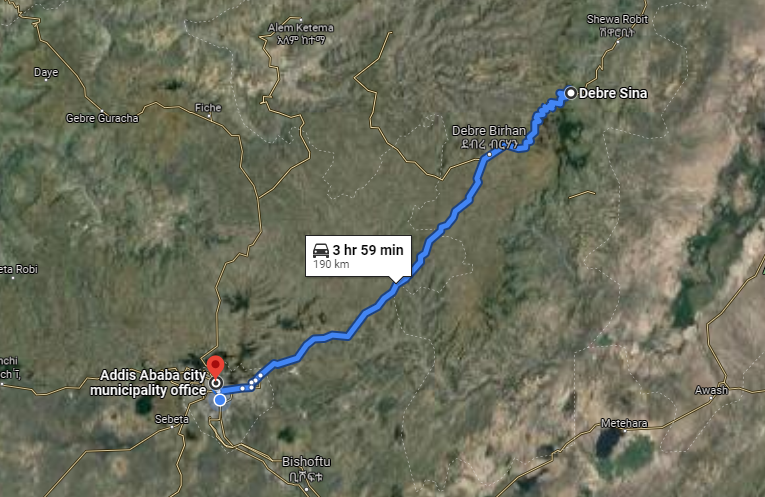 US pushes three ships near the coast of Ethiopia

An Egyptian daily newspaper called Al-Masry Al-Youm published a news report on Nov 23, saying, “Washington pushes three ships near the coast of Ethiopia to help its citizens in case the security situation deteriorates”

A phrase reads in the news, “three ships near the coast of Ethiopia. Nevertheless, Ethiopia is known to be a landlocked country bordered by Djibouti, Eritrea, Kenya, Somalia, South Sudan, Sudan, and Somaliland (Somalia) and has no coast. This is the first factual error found in the news at the beginning. 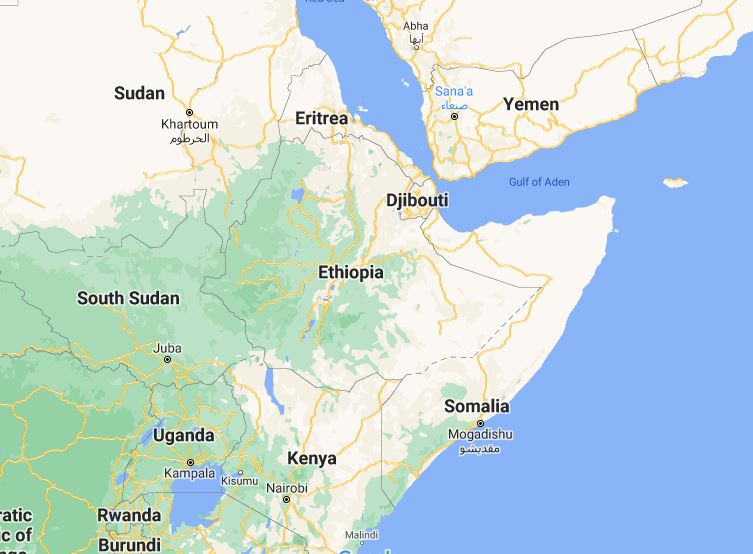 Moreover, HaqCheck interrogated the images used in support of the claim.

A Tineye search of the first image shows that the image was first taken on June 18, 2006, showing US ‘Exercise Valiant Shield 2006’ around the Pacific ocean. The image can be found here.

A Tineye search of the second image shows Japan’s Maritime Self-Defense Force. The image was taken on Oct 18 2015 by a Reuters photographer. The image can be found here.

HaqCheck rated the factual error found in the news and the inaccurate images used to support the claim, as FALSE.

HaqCheck recommends news outlets be responsible and accurate when they report about the ongoing armed conflict. They should maintain accuracy during reporting and must depend on verified firsthand information. Since recently international media have been engaged in releasing controversial reports and sometimes misleading ones.

The government and concerned authorities should also provide the public with accurate and up-to-date information regarding ongoing issues to prevent information disorder.

We also urge social media influencers and activists to refrain from reporting misleading and false content. They should not publish unverified information that can result in harm on the ground.