Last week, viral false posts and controversial claims appeared on social media platforms, mainly on Facebook. In this summary, the false and misleading claims debunked by HaqCheck, and controversies observed during the week are covered.

A post appeared on Facebook on Mar 9, 2022, that Russia is going to establish Africa’s biggest nuclear reactor in Ethiopia. The post was shared as breaking news. It used an image that shows heavy missile systems being transported on trailers. 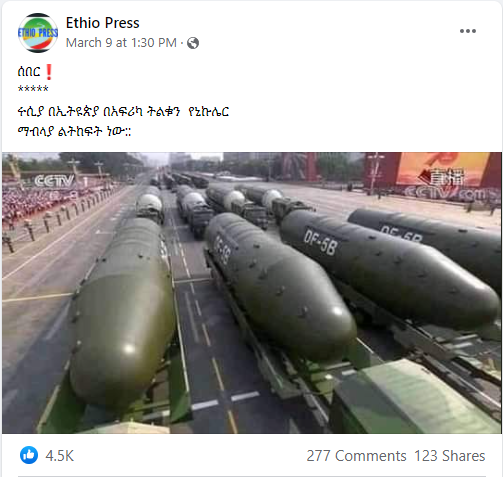 It is true that Ethiopia and Russia signed an agreement to develop a nuclear facility for civilian purposes in March 2022. They again struck a deal in April 2019 for Russia to construct a nuclear power plant in Ethiopia within ten years. The Ethiopian House of Peoples Representatives (HPR) approved the cooperation agreement in December 2020.

The post happens to be misleading in that it uses modern missiles along with the claim. And many may assume that a nuclear reactor facility means nuclear weapon manufacturing. 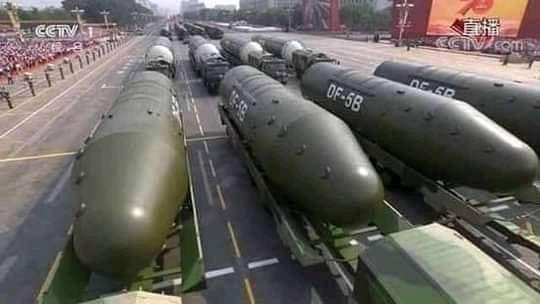 The actual deal Russia and Ethiopia got into was not about constructing a nuclear reactor. It is about developing a nuclear electric power generation facility. The Russian embassy in Addis Ababa told HaqCheck via email that the cooperation agreement will also enable Ethiopia to acquire nuclear technologies to be used in other sectors.

The post showed heavy missile systems and depicted that nuclear weapon manufacturing is going to be installed in Ethiopia while the deal between the two countries is otherwise, which is even way far from implementation.

Moreover, HaqCheck inspected the image and learned that it was taken from a video clip released by China Central Television (CCTV) in September 2019. The video shows a military parade on Sept 30, 2019, during the 70th anniversary of the People's Republic of China since the Communist Party of China took power on Oct 1, 1949.

The heavy missiles in the image used in the Facebook post were displayed during the parade. The missile is called DF (Dongfeng which means missile in Mandarin)-5B and is a sophisticated intercontinental ballistic missile. Hence, though there is a deal between Russia and Ethiopia for the development of a nuclear plant for civilian purposes, it doesn’t mean that Ethiopia is acquiring nuclear weapons.

The deal is that Russia will help Ethiopia to have a nuclear power facility to generate electric power within a 10 year time.

Another false claim debunked by HaqCheck was a claim that there was a rally in Chelenko to commemorate the ‘brutality of Menelik’. A Facebook page shared an image titled, “Menelik's brutality is remembered today at Chelenko" on March 2, 2022, the day the 126th victory of Adwa is celebrated in Addis Ababa. The post was viral.

However, HaqCheck fact-checked the claim and confirmed that the picture was taken from the Oromian Economist website published in 2015 used in another context.

Oromian Economist used the picture in its article entitled, “The Calanqoo Massacre Memorial Monument Inaugurated 21st March 2015”, a news report on the inauguration of the monument, along with other pictures and videos of the event. 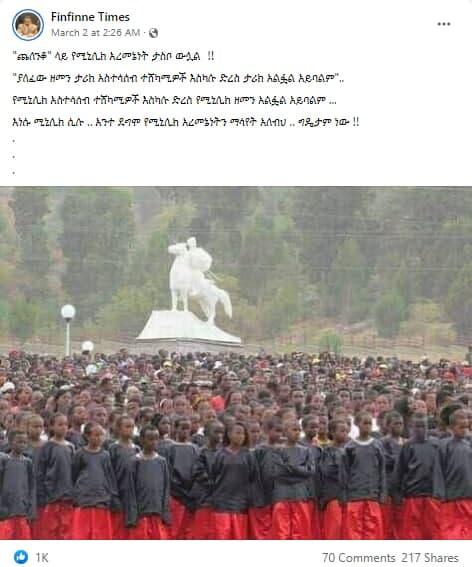 The Chelenqo Massacre Memorial Monument was inaugurated on March 21, 2015, in East Hararghe. 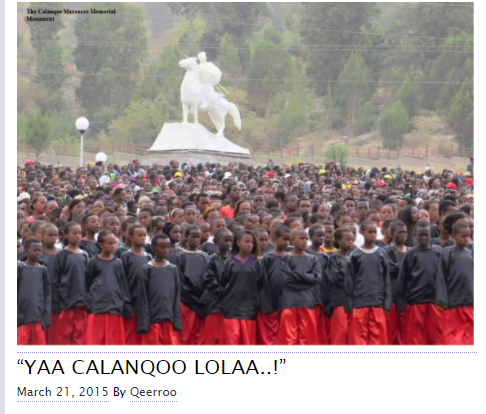 Thus, HaqCheck confirmed that the image used to support the claim is not related to the subject under discussion, in addition to its being old, and rated it FALSE.

A widely circulated Facebook post emerged last week with an image claiming that Gumuz rebels attacked workers of the Great Ethiopian Renaissance Dam (GERD). The post, published on Mar 3, 2022, stated GERD workers and soldiers from the defense forces were attacked by Gumuz rebels while traveling from the dam to a metropolitan area. 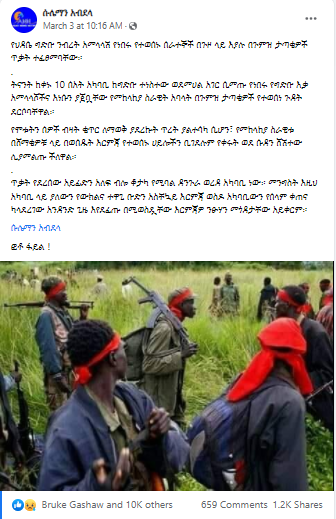 However, HaqCheck inspected the image and rendered it False.

The image was taken from an early article. The image of the rebels is found in an article which was posted on Sep 1, 2017, titled “Twenty-six-year-old American freelance journalist Christopher Allen was shot dead as he reported on the fight.”

The image shows South Sudan rebel fighters who wear red ragged strips of cloth to identify themselves to each other as friendly forces. 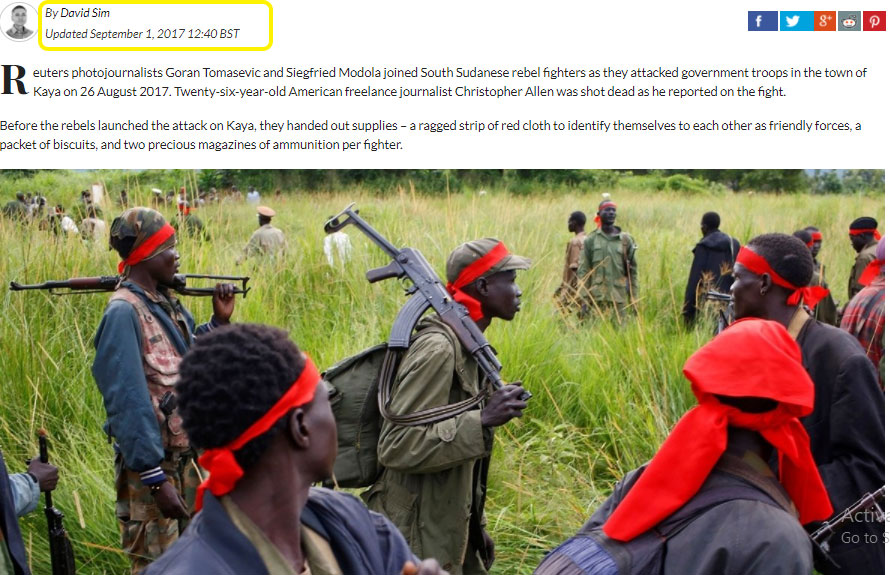 Even though there are several claims that Gumuz rebels conducted an attack on the dam workers, most of the Pages use the same image to support the claim.

Therefore, HaqCheck inspected and rendered the image which is used to support the claim False.

A Facebook post appeared on Mar 5, 2022, sharing an image to support a claim that the Tigray People’s Liberation Front (TPLF) was mobilizing its armed units towards Eritrea. 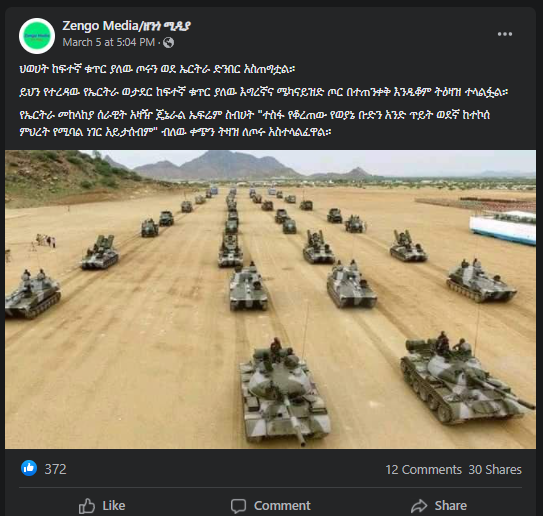 However, HaqCheck fact-checked the claim and confirmed that the image doesn’t show the TPLF army marching towards Eritrea. 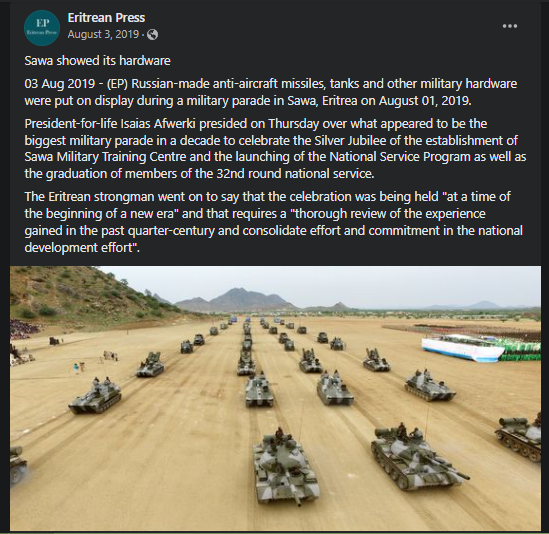 HaqCheck interrogated the image used to support the claim and found out that it is an old picture posted on Aug 3, 2019, on the Eritrean Press Facebook page.

Eritrean Press used the picture on its page entitled, “Sawa showed its hardware”, a news report during a military parade in Sawa, Eritrea, on August 01, 2019. Therefore, HaqCheck confirmed that the image used to support the claim is old and rated the claim FALSE.

Controversy over the procurement of 40 million edible oil

There is currently a shortage of edible oil and a surprising surge in its price in Ethiopia. The Ministry of Trade and Regional Integration briefly announced that the government would import 40 million liters of edible oil.

Complaints and satirical posts had been observed all over social media platforms regarding the shortage and surprising price surge.

The Ministry of Finance then stated that there was no agreement with anyone to procure the claimed amounts of edible oil. It announced that there was only a study being conducted to solve the shortage of the product.

HaqCheck recommends the government to give timely and accurate information to the public and to the media.

We recommend social media content creators and outlets be responsible and offer their audience timely, accurate, and sufficient information.