It was observed that most of the content on social media platforms widely used in Ethiopia had been evolving from image-supported false claims towards opinions and controversies not supported by any images, videos, or data worth fact-checking.

Previously, most of the disinformation issues used to revolve around the armed conflict in the northern part of the country. There were times when almost all the false claims observed by HaqCheck were related to the war in Tigray and the adjacent regional states.

Last month, the false claims that were debunked and the controversies covered by HaqCheck were diversified.

HaqCheck inspected and covered issues regarding controversies within political parties, release of journalists, mine collapse, looted artifacts, and others that had little to do with the armed conflict in northern Ethiopia.

Most of the false claims in February were supported with false images and false videos. This trend had mainly been observed since the beginning of the war between the Tigray People Liberation Front (TPLF) and the Ethiopian federal government in October 2020.

On Feb 9, 2022, A Facebook page with more than 150 thousand followers shared an image captioned, “Oromia Liberation Army (OLA) closed the road from Addis Ababa to Gojjam as reported by various Amhara regional media.” 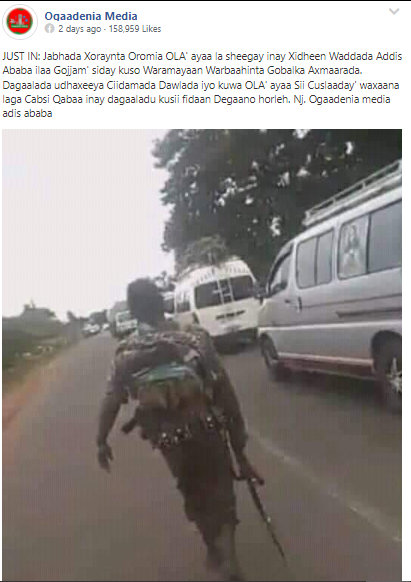 In August, the armed group announced that it formed an alliance with TPLF, which has been fighting government forces since Nov 2020.

However, the image is found to be False, taken from a previous video published on Aug 25, 2021, on a news website with the title, “OLA is committing violence and crime on innocents in Wollega and Gujji zones.”

Even though there were several claims that OLA closed the road from Addis Ababa to Gojam the image used to support the claim is False.

Therefore, HaqCheck checked the image and rendered it False.

A Telegram channel and a Facebook page shared a post on Feb 4, 2022, captioned, “weapons captured from TPLF forces at the Raya front.” 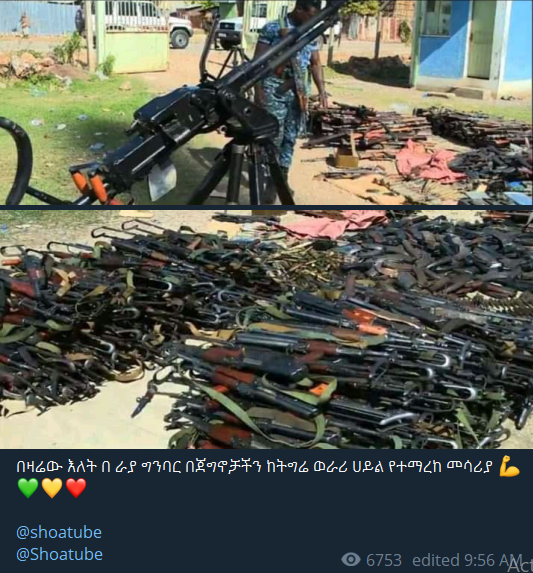 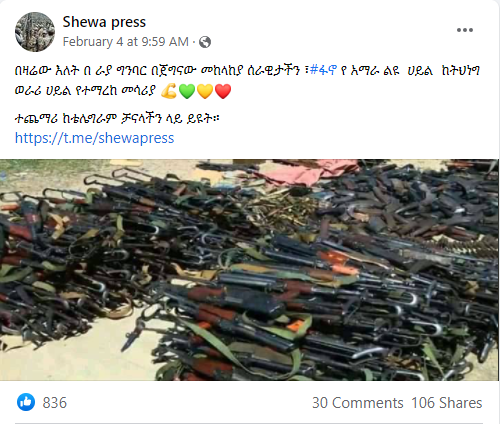 In order to prove the claim HaqCheck made an investigation on the images and spotted the pictures in a news video on Amhara Media Corporations’ YouTube channel published on Feb 2, 2022. 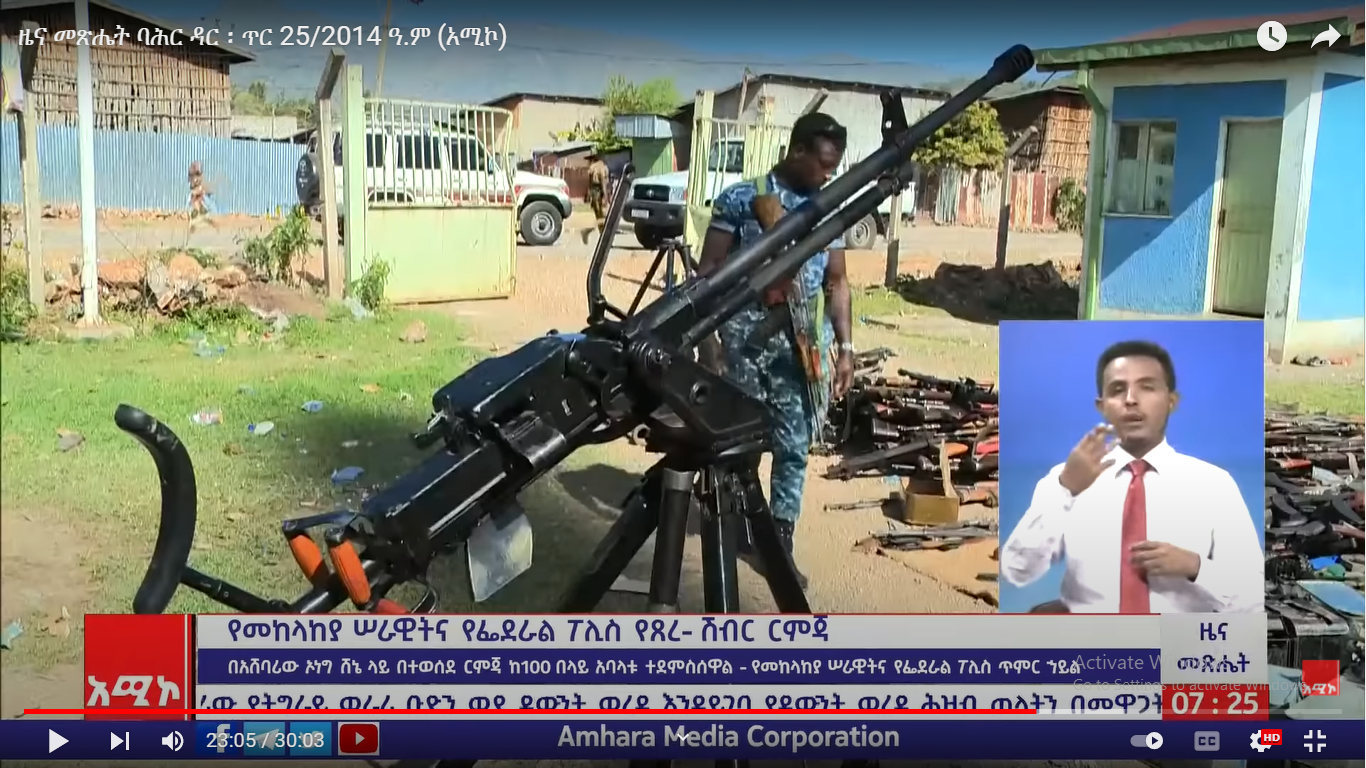 A Facebook account with more than 100,000 followers posted an image on Feb 02, 2022, claiming to show a Tigrayn mother digging a trench in an effort of helping TPLF attack Afar. By the time the fact-checking article was published it got more than one thousand reactions and was shared nearly two hundred times. 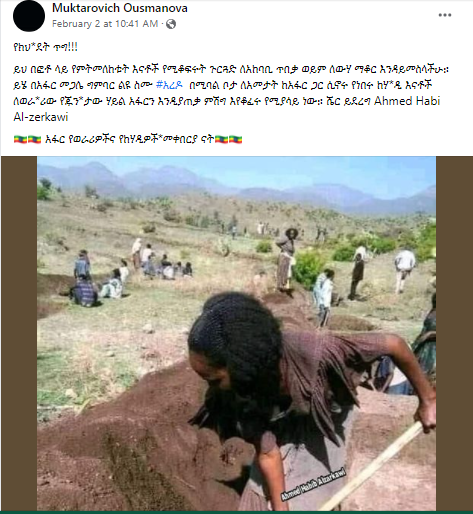 HaqCheck investigated the post and proved that the image was first posted on Apr 12, 2019, on a Facebook page captioned, “a terrace will not help for the people of Raya, rather removing bad governance.” Therefore, HaqCheck rendered the picture used to support the claim False.

The release of Tamrat Negera

Henceforth, the Ethiopian Human Rights Commission released a statement urging the government to release people detained in relation to the state of emergency.

There was also an online hashtag campaign that demanded the release of Tamrat Negera and others. 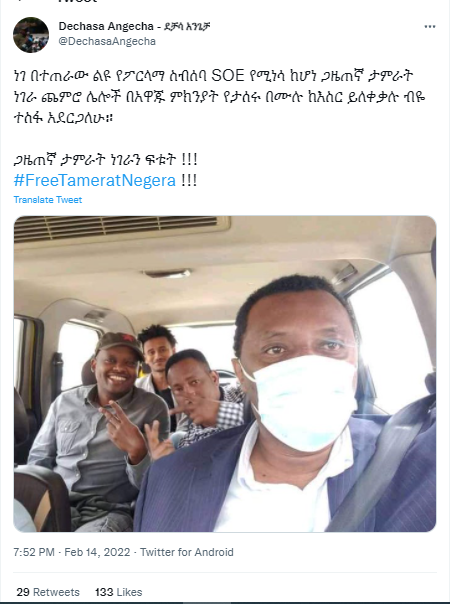 The caption of the Facebook post which shared a picture that shows Tamrat Negera and others reads, “We were told by our brother Yonas Weldeyes that Tamrat Negera is released. Extrajudicial detention has to be stopped.” 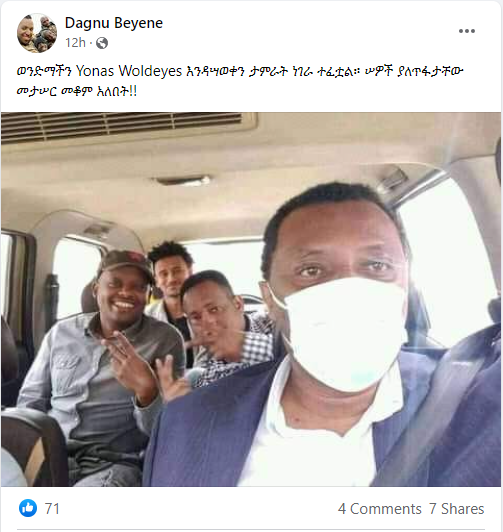 However, the image used in the post was learned to be first published on Facebook on Aug 7, 2021, by the name Tamrat Negera. Moreover, HaqCheck instantly reached out to Tamrat Negera’s family and confirmed that he was not released yet. Therefore, HaqCheck rated the post FALSE.

A Facebook post shared an image on Feb 19, 2022, claiming that thousands of Eritrean soldiers were recently killed in Tigray. The Facebook post published by the page, which has over 54 thousand followers, was shared more than 169 times at the time. 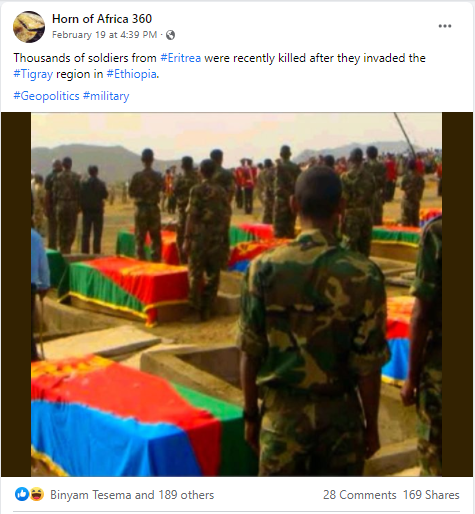 The post shared an image with the claim that Eritrean troops were recently killed in Tigray after they tried to invade the regional state.

However, the image was taken and cropped from an old post on the Internet. The original image was published on June 13, 2019, along with an article written on the Eritrean Martyrs’ Day, annually commemorated on June 20.

People killed due to mine collapse

One of the claims HaqCheck interrogated last week was a claim that seven people were killed by a mine collapse. Africanews.com, a news website on Feb 23, 2022, shared a news report titled, “Seven killed in Ethiopia mine collapse.” 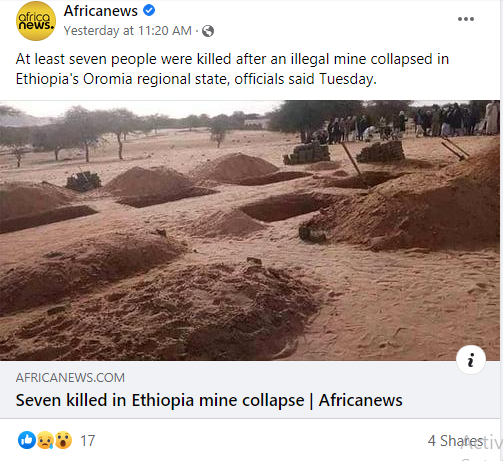 According to Africanews’ news report, the incident occurred as the artisanal gold miners were caught up by the incident and buried underground while they were searching for gold.

HaqCheck inspected the image and proved that the image doesn’t prove a mine collapse incident in Ethiopia. The picture was first found on Dec 28, 2021, on different news websites with the title, “More than 30 killed in Sudan gold mine collapse.” At least 31 miners were killed and eight missing in Sudan, according to the reports on the different websites.

The Associated Press reported the incident that a rudimentary gold mine collapsed and the country’s state-run mining company said, “workers and villagers were searching the Darsaya mine for more bodies and possible survivors” On Dec 29, 2021. The mine is located in the Fuja village, around 700 kilometers south of the capital of Khartoum.

The News report also used two of its tweets from last year. Both of them are about a mine collapse that happened in Niger and Sudan respectively.

Therefore, HaqCheck rated the picture used to support the claim False. Additionally, there was no official news about the mine collapse incident so far.

There were also claims and many posts regarding alleged looted artifacts amid the war in Tigray.

There were reports that ancient heritages and artifacts appeared for sale on websites including eBay, raising suspicions that they could have been plundered from churches during the conflict in Tigray, according to The Independent, a London-based news outlet.

Meanwhile, a Facebook page with more than 13 thousand followers shared a post captioned, “looted artifacts from Tigray are being sold like this.” Under the caption is attached a link that leads to a news website called africanews.com.

The website posted a video on Feb 14, 2022, entitled, “Tigray conflict: surge in ancient Ethiopian relics for sale.” By the time, the Facebook post had more than 200 reactions and was shared more than 90 times.

HaqCheck looked into the video and proved that it doesn’t show looted artifacts presented on e-commerce websites for sale at negligible price. 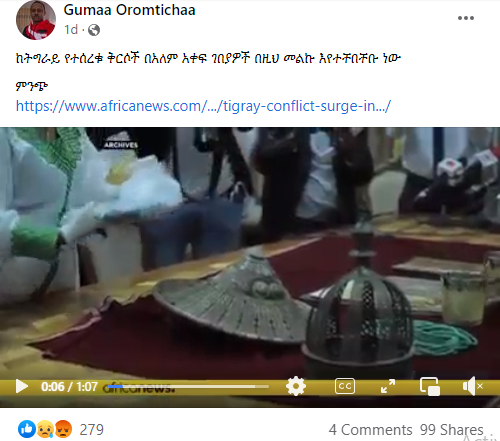 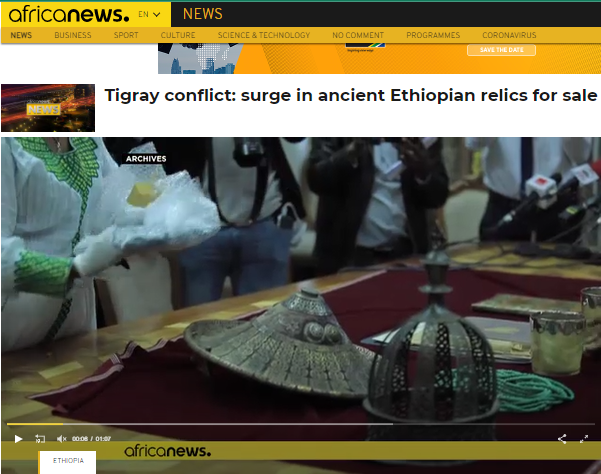 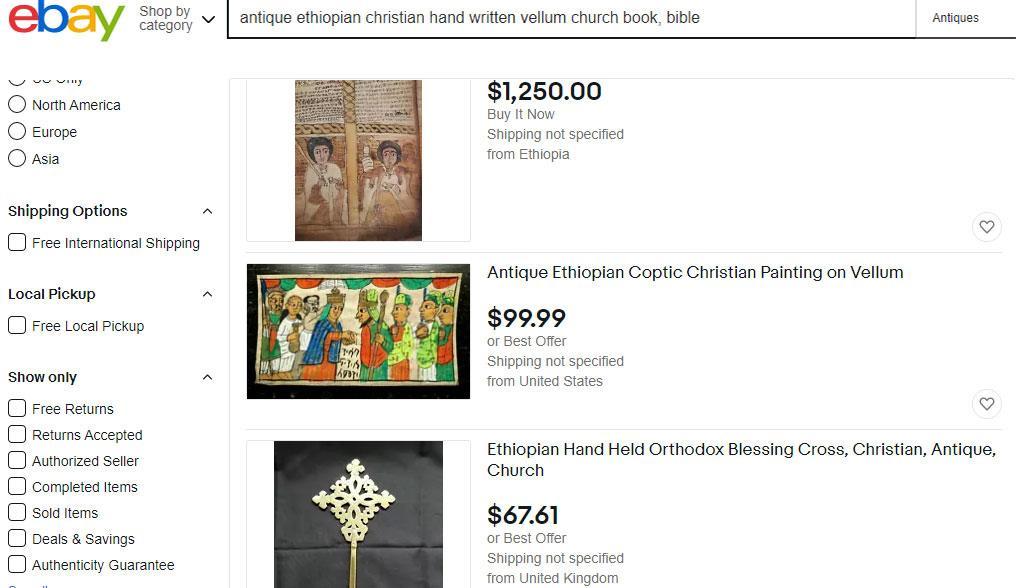 The video on the website claims, the latest victims of the year-long war in Tigray are the country's rich artifacts, centuries-old manuscripts, scrolls which are offered on websites for a few hundred dollars and experts suspect that they have been plundered during the conflict.

HaqCheck found out that the video referred to by the Facebook post was first released on a YouTube channel on Nov 23, 2021, having more than 4.5 million subscribers entitled, “13 stolen artifacts returned after 150 years.” The video had over five thousand views.

Even though there are several claims that different artifacts are looted from Tigray during the war, neither the Facebook post nor the website video does not prove the claim. Therefore, HaqCheck fact-checked the post and rendered it False.

The letter of Tsega Arage

A letter  that was circulating on social media claimed to be written by the name of Agenew Teshager, former President of the Amhara Regional State, was another subject of controversy in February. But, the letter is actually written by Tsega Arage, a member of Prosperity Party central committee, to the Prosperity Party Control and Inspection Commission. 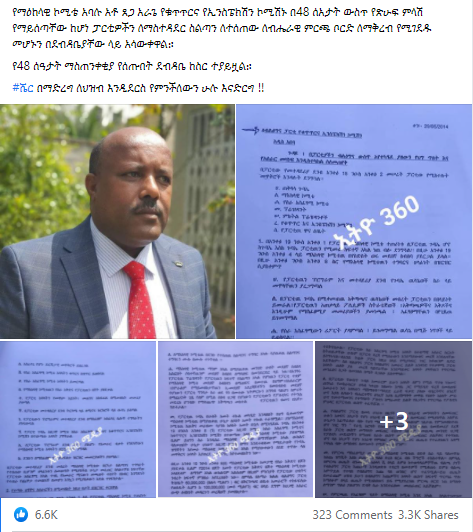 Tsega discussed in his letter that “the Rules and regulations were broken in the party.”

Apart from the reality, there was a manipulated image circulating on Facebook. The post used a caption, "Agegnew Teshager has broken his silence" and attached the letter of Tsega Arage to support its assertion. 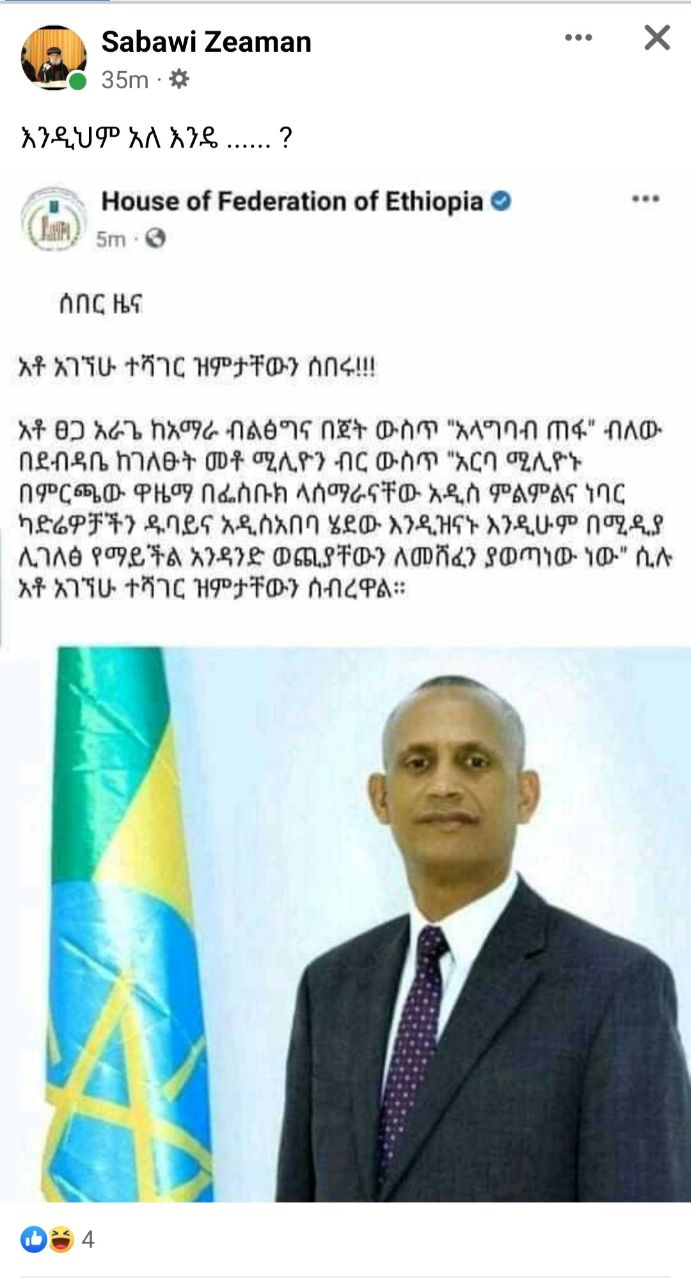 Since the letter was written by Tsega Arage, HaqCheck proved that the image was manipulated. Therefore HaqCheck checked the post and rendered it False.

US Embassy opening a consular office in Mekelle

The claim that the US embassy in Addis Ababa opened a consular office in Mekelle, Tigray was one of the major topics of social media controversies during the last weeks of the month.

Wazema Radio reported that the American Embassy in Addis Ababa opened a consular office in Mekelle.

Thereafter, counterclaims came out saying that the information was false. Sheger FM, a local radio channel reported that the American Embassy denied the information that it opened a consular office in Mekelle.

HaqCheck asked the US embassy in Addis Ababa regarding the issue. The Embassy’s spokesperson told HaqCheck that the claims regarding the opening of a consular office in Mekelle, Tigray are all false.

HaqCheck recommends global media-tech corporations such as Meta, Twitter, and Telegram to work in collaboration with local fact-checking organizations to prevent disinformation dissemination on their platforms.

HaqCheck urges media outlets, whether local or international, to be responsible during reporting and make holistic analysis regarding any matter at hand. They should give timely and sufficient information to prevent the dissemination of disinformation.

It is always recommended that social media influencers and content creators be responsible and refrain from feeding false information.

From the looted artifacts to the release of Tamerat Negera: Weekly summary