A Facebook page with more than 4 million followers posted a link of a news article on Dec 18, stating the military engagements and victories claimed to be achieved by the Oromo Liberation Army (OLA) alongside a statement that the army commanded its troops to ‘continue attacks on ethnic Amharas’ residing in Oromia Regional State in reference to a recent communique as its source. By the time this article was published the post was shared about one hundred times and had one thousand and five hundred reactions.

However, HaqCheck inspected the news and found it to be PARTLY FALSE. 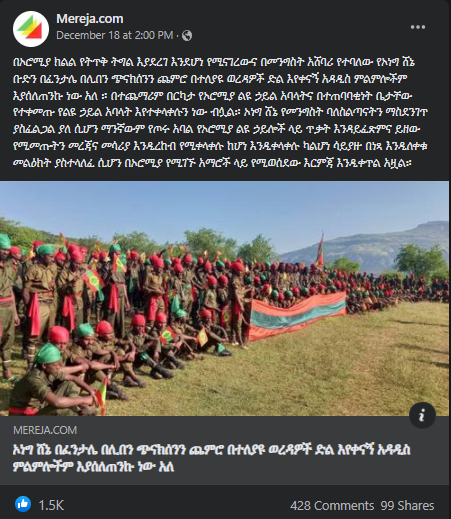 Oromo Liberation Army (OLA), which is called Shane by the federal government of Ethiopia, was a military wing of the Oromo Liberation Front (OLF)   claimed to split independently later on May 1, 2021. OLA is designated as a ‘Terrorist’ organization by the Ethiopian parliament. OLA has also been accused of targeting civilians and committing gross human rights violations, especially in the East Wollega zone of the Oromia Regional State.

Kumsa Diriba aka Jaal Marro, Commander-in-Chief of OLA, denied these accusations stating that any member of the army who is found targeting civilians would be held responsible according to their law in his interview.

In August OLA announced its alliance with the Tigray Liberation Front (TPLF), which has been fighting the federal government since Nov 2020. OLA  had also been issuing press statements announcing some areas in Oromia Regional State under its control on a website named OLA Communique. On Dec 16, OLA published a communique entitled OLA UPDATE #17 on this website regarding its recent military engagements and battlefield victories around different areas in the  Oromia Region.

The claim emerged on Facebook in this context asserting that OLA commanded its soldiers, in the communique, to 'continue the attack on ethnic Amharas'  who live in the Oromia Regional State. The news article also reported that OLA instructed its troops not to attack Oromia Special Police Force except to take their weapons and receive the information they would provide.

HaqCheck looked into the communique recently published by OLA and confirmed that though it announced recent battlefield engagement developments of OLA, it doesn’t command the armed group to ‘continue attacks’ or target ethnic Amharas in Oromia or ‘not to attack’ Oromia Regional forces.

HaqCheck cross-checked the claim and the recent communique and rendered the post as PARTLY FALSE.

Saba is a fact-checking intern at HaqCheck.