We covered the major controversies and misinformative contents in the past week.

A helicopter shot down by TPLF forces

The armed conflict between the Tigray Liberation Front (TPLF) forces and the Ethiopian Federal Government-led forces has expanded. In this context, there had been many false and misleading claims from both sides or their respective supporters on social media.

One of the claims fact-checked by HaqCheck last week was a social media post that shared images on Facebook with the claim that a military helicopter belonging to the Ethiopian armed forces was shot down by TPLF forces near the strategic town of Mille in Afar Region.

Three viral posts that made a similar claim that TPLF forces taken down a fighter helicopter near Mille were interrogated by HaqCheck. The first claim appeared on Nov 11, 2021, on the official Facebook page of TPLF, which has more than 600,000 followers, with a false image that shows a burning helicopter. The post had been shared more than 400 times and received more than 2 thousand reactions within an hour. However, the image was found to be taken from a  publication posted four years ago by The Time on Oct. 23, 2016, in an article entitled “I was blown up and trapped by Isis guns”.

A second post with a false image was shared by the Facebook page of the regional TV outlet, Tigray Television, which has more than 504,000 followers. The post claimed that “The Hero Tigray Army taken down a military helicopter and burned it this morning at Mille front...” The post had been shared more than 175 times and received more than 1.5 thousand reactions at the time. However, HaqCheck could learn that the image was taken on September 9, 2016, and published for the first time on a website with the caption “A Mil Mi-35 attack helicopter during the Caucasus 2016 strategic drills at Opuk range of Russia's Southern Military District”.

The two claims were rated by HaqCheck FALSE. 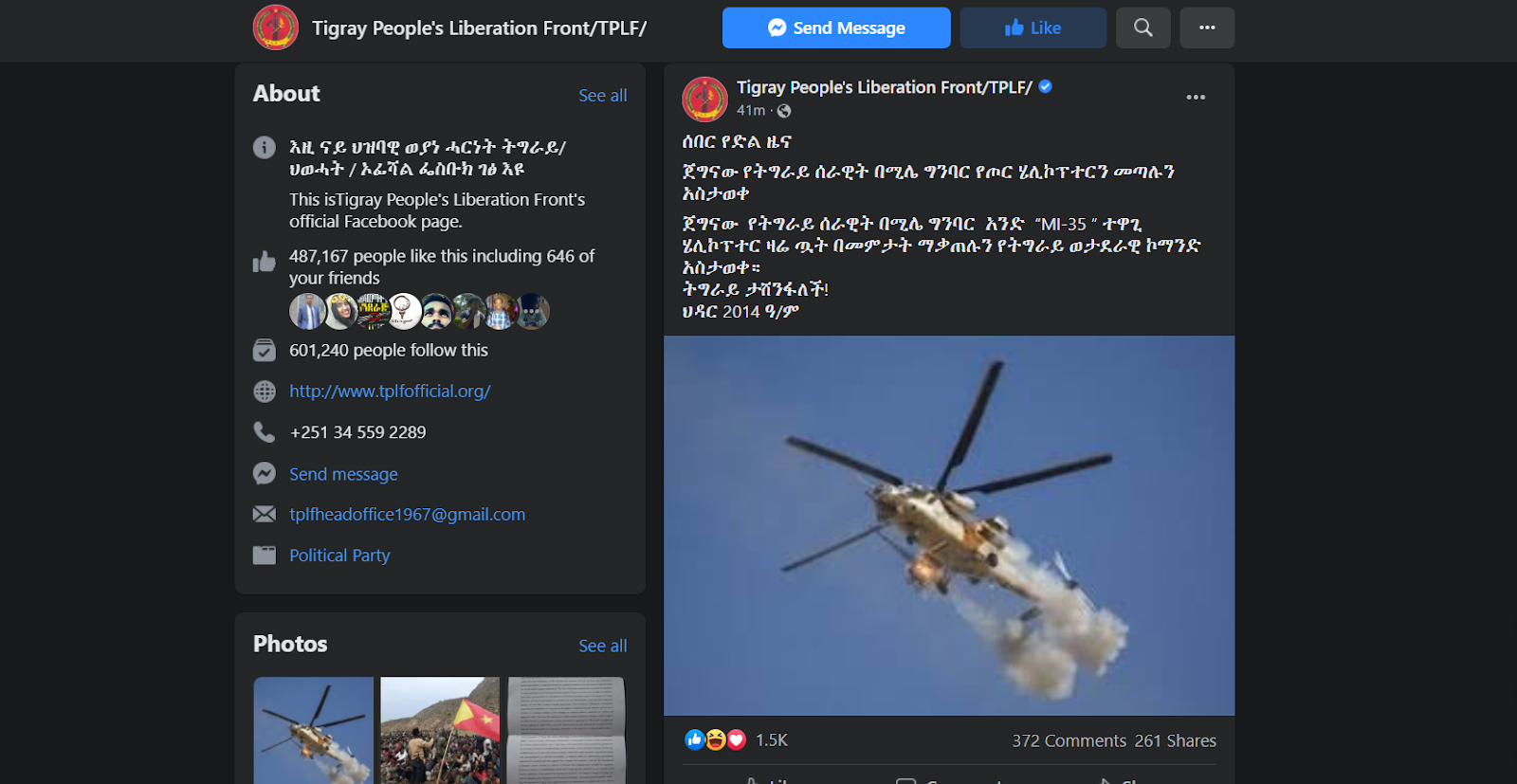 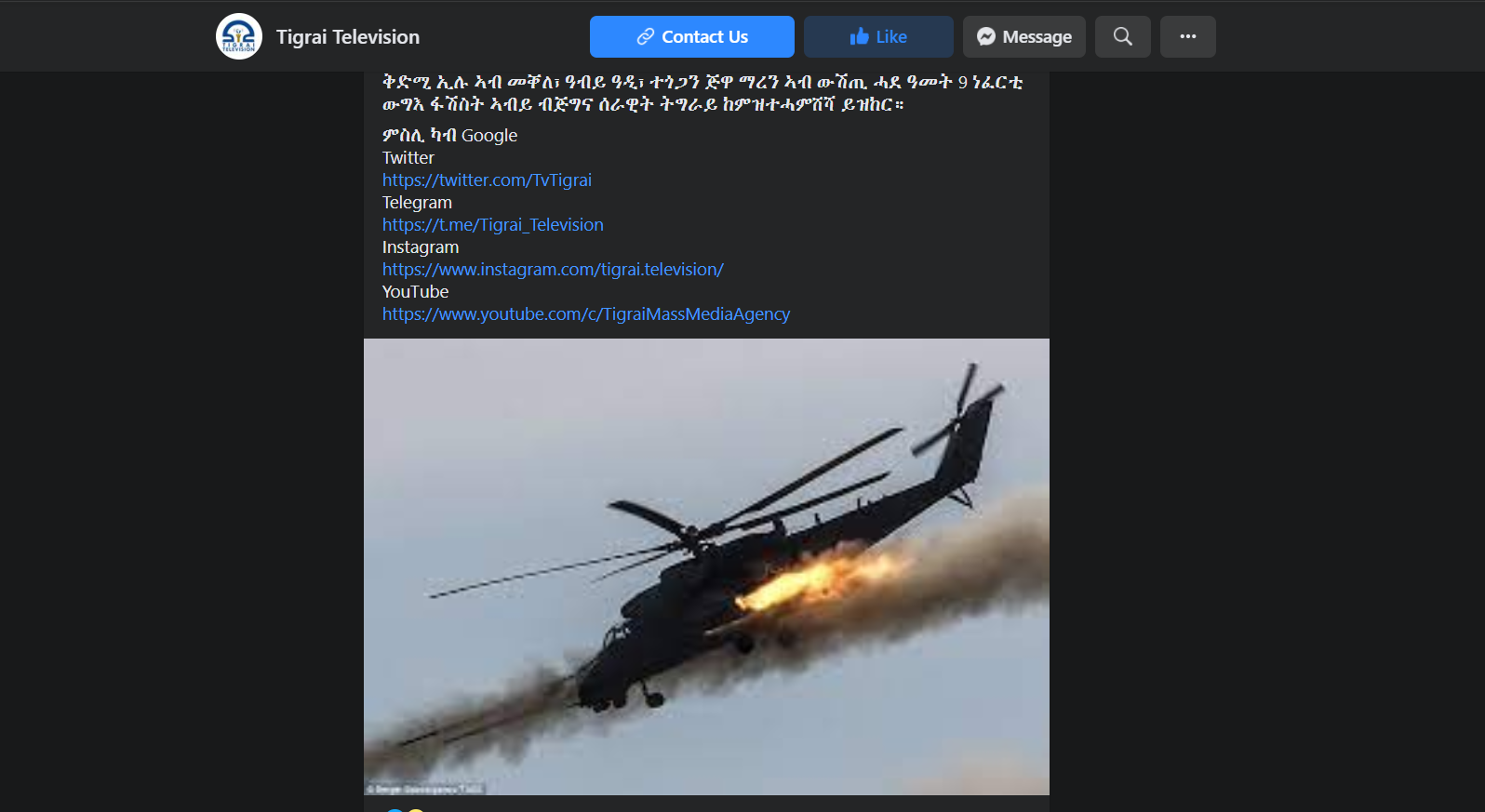 There have also been claims accompanied by false images regarding the OLA’s advance towards the capital, Addis Ababa.

A Facebook page, on Nov 11, 2021, posted images in support of its claim that reads, “The Oromo Liberation Army has overtaken the Shoa region in Addis. They are waiting for the troops coming from the north side.”. The post is published in the Somali language by the page having more than 423,000 followers. The image was false and does not support the claim. It was taken from a previous Facebook post made on September 28, 2020. The caption of the original post written in Afaan Oromo implies that the pictures were taken in Jimma city before the current war broke out. Even Though we can’t find the second image, a close examination of similar elements and details (a soldier’s beanie, a necklace artifact, a white mark of the asphalt road, and the darkness in both images) reveals that it was shot at the time the first image was taken. 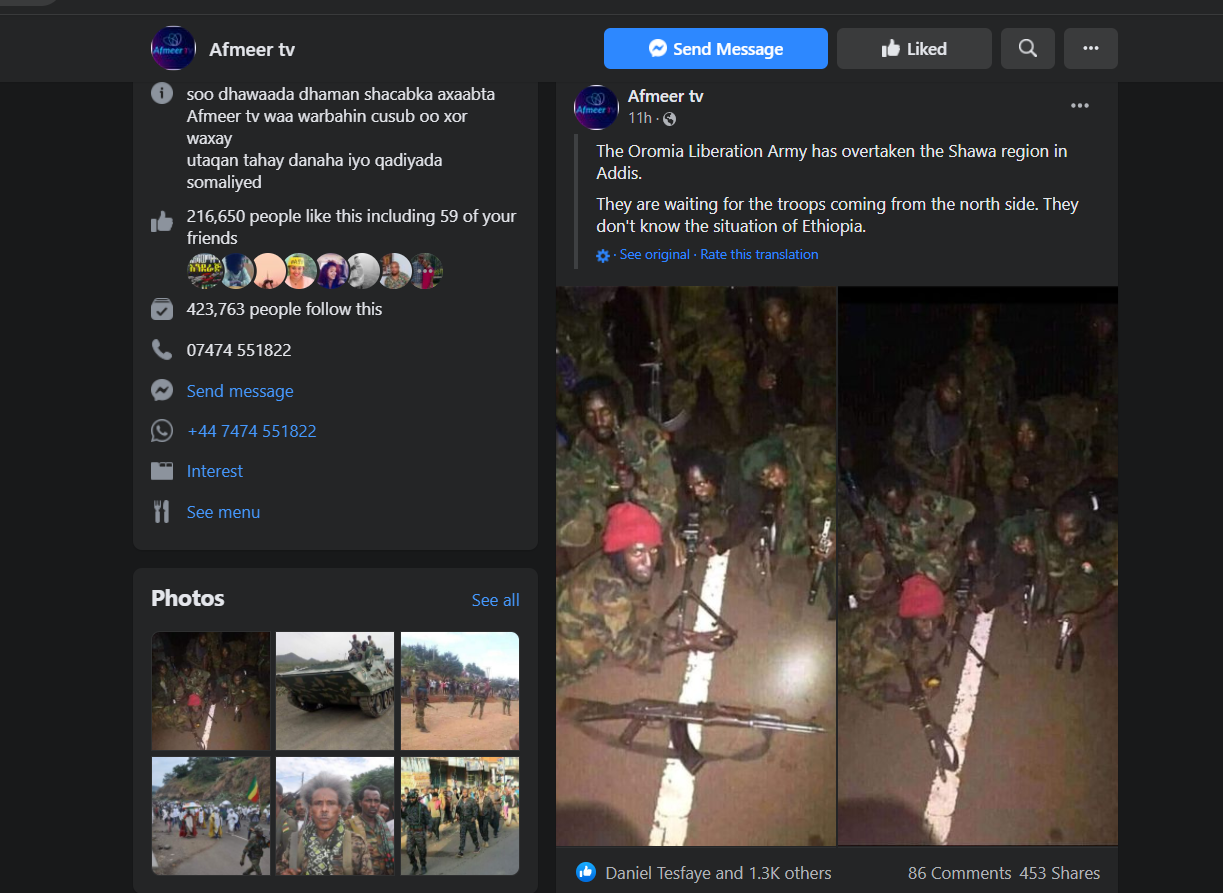 A second social media post claimed that OLA troops were seen on roads that lead to the capital Addis Ababa. A Facebook page that has more than 423 thousand followers has posted an image on Nov 9, captioned,  “ Oromia Liberation Army was seen tonight on the roads leading to the gate of Addis.” By the time this article was published, the post had more than 1000 reactions and was shared more than 400 times. However, the images were taken from previously published images by a Twitter account on Aug 23, 2021, in which the tweet claimed that Negele Borana town, 587km from the capital, was partially captured by OLA. 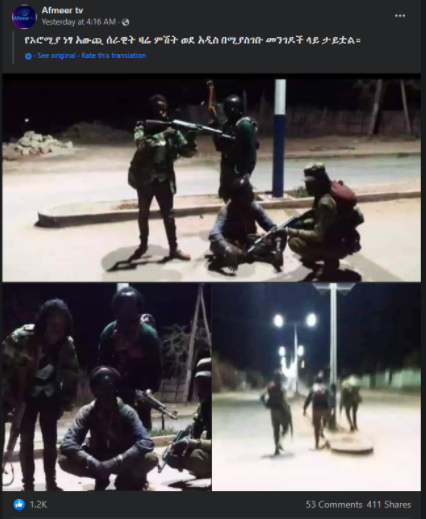 Another misleading statement was made last week by Reuters in one of its reports about the ongoing situation in Ethiopia. Reuters published an article on Nov 10, 2021, with the title: “Ethiopia rounds up high-profile Tigrayans, U.N. staff”.

In the third paragraph of the article describing the state of Emergency in Ethiopia, it reads,“...requires citizens to carry ID cards that can indicate ethnic origin.”

It’s a misleading statement. Though the government stated that residents must bear identity cards with themselves, the current resident IDs don't show the ethnic origin of the holder. Residents' ID cards issued and used currently do not indicate either the ethnic origin or birthplace of a person, as asserted by  Reuters' report.

A post by an Egyptian magazine, Egypt Today’sFacebook page with more than 139,000 followers posted a photo on Nov. 8, 2021,  in which it claimed “Leader of Oromo People Liberation Front says forces are 40 kilometers away from the Ethiopian capital, Addis Ababa.”  The Image shows trekking arrayed soldiers, supposedly OLF forces according to the caption of the post.

However, the post was false due to inaccuracies. In the first place, there is no such armed group called ‘Oromo People Liberation Front'. There is an armed group with the name ‘Oromo Liberation Army (OLA)’ that is currently active in the armed conflict in Ethiopia. The group claims it had taken control of several towns in the western, central, and southern Oromia regions.

Secondly, the image was found to be posted for the first time by Ethiopian Insight on August 10, 2020. The picture was published with a news analysis entitled, “Tigray-federal tit-for-tat threatens trouble”, even before the ongoing war.

The Ethiopian government and TPLF agreeing to a negotiation?

The Ethiopian Reporter newspaper published an article that stated that the Ethiopian government and TPLF agreed to a negotiation. But later on, the newspaper published a correction that the headline and the claim that the belligerents agreed to negotiation was a mistake made during translation. The article prompted similar social media posts with the same and/or related claims.

The article was later published with a title that describes that the Ethiopian government and Tigray leaders told Olusegun Obasanjo, AU envoy, that since the problem of the conflict is political, the solution would be political.

International media outlets should refrain from making controversial and misleading reports. They should be careful and consider the sensitive situation in the country.

We always urge social media users to be conscious of the reports. This includes disinformation trends and media consumers should identify the right pages and sources to understand the intention and credibility of the message they are reading or sharing.

OPINION
PREVIOUS ARTICLEFailure to protect national exams from thieves and the right to education: An observation
NEXT ARTICLEFalse: The images don't show ammunition seized in Addis Ababa