False: The image doesn’t show Sudanese protesters holding the Ethiopian flag during a recent rally in support of the ENDF

Saba is a junior fact-checker at HaqCheck.

A Facebook account with 262,812 followers posted a photo on Dec 31, 2021, claiming that Sudanese demonstrators who protested against the government marching to the palace were holding the Ethiopian federal flag to show their support to Ethiopia and the Ethiopian National Defense Forces (ENDF) on Dec 30. By the time this article was published, the post had 13,000 reactions and was shared two thousand times.

However, Haqcheck looked into the image used to support the claim and rendered it FALSE due to its inaccuracy.

Sudan’s crisis started as an Economic problem, due to the rise in the cost of bread and fuel in Dec 2018, which later grew to be a political problem and led to the overthrow of the government of President Omar Al-Bashir who ruled Sudan for 30 years. After the formation of a transitional government called the ‘Sovereignty Council of Sudan’ to be led by Abdalla Hamdok as Prime Minister, protests have been held asking higher officials of the former government to be arrested and face accountability for their actions.

The military, led by Abdel Fattah Al-Burhan, took control of power in a military coup On Oct 25 2021, and Prime Minister Abdalla Hamdok was arrested with the majority of his cabinet. The coup was followed by pro-civilian government protests that started On Oct 26. Later General Abdul Fattah Al-Burhan announced that he was willing to share power and restore the Sovereignty Council of Sudan and signed a deal. But civilian groups rejected the deal, refusing the power-sharing deal with the military, and had been holding a series of protests with an ever-increasing number of participants.

It is reported that many Ethiopians living in Sudan participated in the rallies. Sudan and Ethiopia have been in a state of disagreement particularly since last year due to a border dispute.

In this context, the claim appeared on Facebook stating that during the protest held on Dec 30, 2021 millions of Sudanese were holding the Ethiopian flag singing, “Ethiopia is our second country, peace to Ethiopia, victory to the   Ethiopian National Defense of Force[s].” 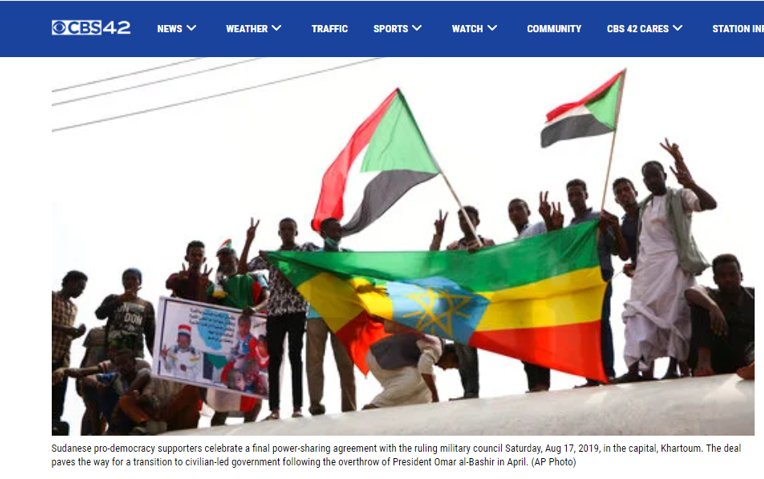 HaqCheck looked into the image and confirmed that the image does not support the claim that millions of Sudanese held the Ethiopian flag during a recent protest. The image was taken from another previous publication by CBS 42 news in Aug 2019 entitled, “Sudanese pro-democracy supporters celebrate a final power-sharing agreement with the ruling military council…”. The report used the picture with the supposition of showing the Sudanese holding the Ethiopian flag since the Ethiopian Government played an important role in the peace process.

Therefore, Haqcheck rated the image used to support the claim as FALSE.

OPINION
PREVIOUS ARTICLEEthiopia and the West: addressing concerns and an attempt at mending fragile relations
NEXT ARTICLEI was told the Prime Minister was handicapped to decide over our imprisonment: Eskinder Nega