The video was previously posted in 2018.

A Facebook page with more than 38,000 followers posted a 3:16 minute video on Oct 31, claiming to show the people of Kemisse celebrating the entrance of OLA that day. The Amharic caption in the post reads “There is a wave of people in Kemissie right now… The people are expressing their happiness. Our city is shining with our freedom flag...” The flags in the video show a flag of the Oromo Liberation Front, that is also used by the Oromo Liberation Army.

The video had been viewed more than 6300 times and had more than 70 shares by the time this article was published.

However, the video is from time past and rated as False. 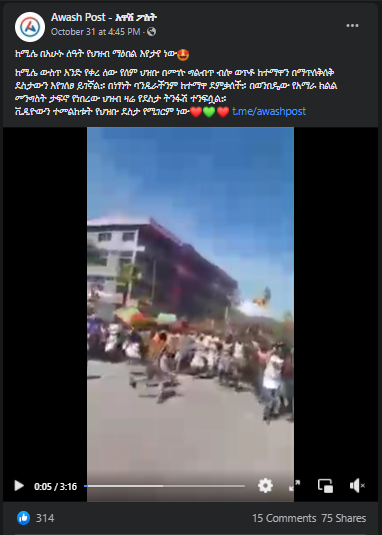 The Ethiopian government designated the Oromo Liberation Army (aka OLF Shene) as a terrorist group along with the Tigray People Liberation Front (TPLF) on May 1, 2021. The two groups announced their alliance on August 11. After the war in Tigray spread to the neighboring regions Afar and Amhara, TPLF started marching to different cities and towns including Dessie and Kombolcha. On November 1 OLA said it had seized the town of Kemissie, 335 km from Addis Ababa. It was in this context that the Facebook claim appeared.

However, a reverse image search of screenshots from the video revealed that the video was posted on Facebook previously on October 23, 2018. Even though we couldn’t confirm where the video was taken, the timestamp of the previous post signifies that it could be around the time when prominent OLF leaders returned to Ethiopia in September 2018.

On the other hand, HaqCheck found out that the page was created in November 2020 with the name “DW International - Dimtsi Woyane” and later changed its name to Awash post on September 2, 2021. Such changes in the name denote the swinging purpose the page wants to serve, which is often a deceptive cause.

Due to the above reason the video claiming to show the people of Kemissie celebrating the entrance of OLA has been rendered False.