In the following summary, we cover major disinformation trends observed to prevail in the third week of September along with important recommendations.

One of the claims in this week of September is a video asserting to show the Ethiopian military and Afar heroes killing and chasing away TPLF forces.

The social media post claims that the Ethiopian military force and Afar Heroes are chasing away and expelling TPLF forces from a town in Afar.

HaqCheck checked the video and found that it was taken from a military engagement between the Saudi-led forces and Yemen forces in the Jizan axis, Saudi Arabia border, on May 29. Hence, it is confirmed that the video doesn’t show the operation in the Afar front.

Haqcheck, therefore, rendered the post as False due to its appeal to a wrong video to prove the claim.

Controversies over the destroyed Tekeze Bridge

Social media platforms, mainly Facebook and Twitter, last week were overwhelmed with posts over claims of the destroyed bridge on the Tekeze River.

Controversies heated up between pro-Government and those on the TPLF sides, blaming each other for the damage.

On the other hand, different people tweeted and shared posts accusing the Ethiopian National Defence Force and Amhara forces, of destroying the bridge on the Tekeze River.

It was reported previously that another bridge on the other side of the Tekeze river was also destroyed and the news was similarly controversial.

An image was shared on Facebook claiming to show the Ethiopian Air Force in action. Even though the claim was shared a week before, we observed that it has still been circulating this week. Haqcheck has analyzed the image and obtained a YouTube video posted on June 15, 2017, that contains the exact image posted by the Facebook page.  The image is taken from a YouTube video showing NATO forces conducting military training in Romania. The post has been rendered false due to its use of the wrong image to support the claim.

Another misinformative piece that grabbed our attention this week was a sponsored post on Facebook. Analyzing the message of the post and the logo it used, we could learn that the page had been impostering a reputed organization, Ethio Telecom. Imposter content is one of the types of disinformation used to deceive and mislead users. The post offers prizes including “free 100 GB and iPhones”. It also has an invitation to click on a link that doesn’t actually open. 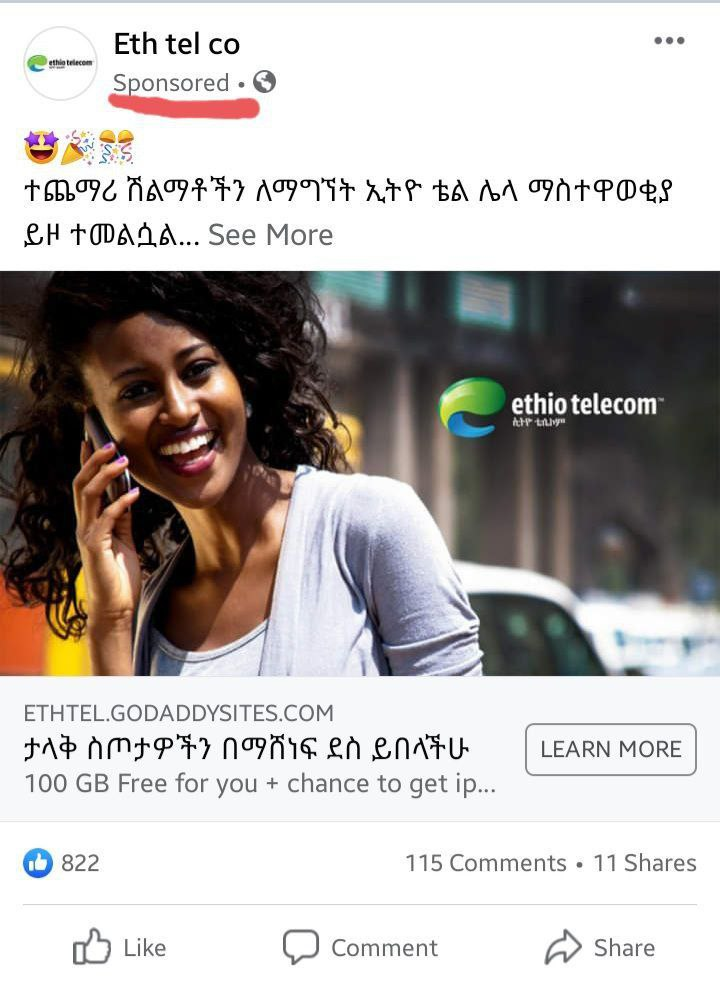 Such kinds of sponsored or boosted posts are paid advertisements with the privilege of posting the desired message in a text, image, or video. Facebook reviews the post’s appropriateness according to its advertising policies. Despite the fact that misinformation is one of the prohibited intents to be advertised according to the review policies, Facebook could be said to be irresponsible to approve a post that misinforms the public by impostering a well established public organization to the wider audience.

No matter what the intention is, social media influencers, activists and public figures should be careful about the information they share and be more alert in choosing a trustable information outlet and act responsibly in whatever content they share.

People are advised to be well aware of the social media landscape; disinformation trends, identify the right pages and media and take time to understand the intention and credibility of the message they are consuming and sharing.

As a fact checking initiative based in Ethiopia, we call upon giant social media platforms like Facebook to give due attention, responsibility and respect to users from different countries, languages and cultures and work with local initiatives that understand the Ethiopian context and media landscape better.