Reports over Facebook’s role in the dissemination of hateful content, misinformation and political unrest have emerged this week. A whistleblower called Frances Haugen, former employee of Facebook, accused the company  of intentionally amplifying hateful and disinformation content in countries like Ethiopia.

She alleged that Facebook has a role in fanning ethnic violence in Ethiopia by amplifying hateful and divisive content.

Facebook has been one of the largest platforms where  disinformation and other ill contents have been disseminated  during the ongoing armed conflict in Ethiopia. HaqCheck has debunked multiple false claims with intentions of hate and disinformation for the last 11 months.

“One in five people have mental health problem in Ethiopia”

As World Mental Health Day was celebrated on October 10, mental well-being  has been one of the major topics of discussion in the past week. While different reports were circulating to create awareness about mental health, one that caught the attention of many was the claim that “one in five people have a mental health problem in Ethiopia.” 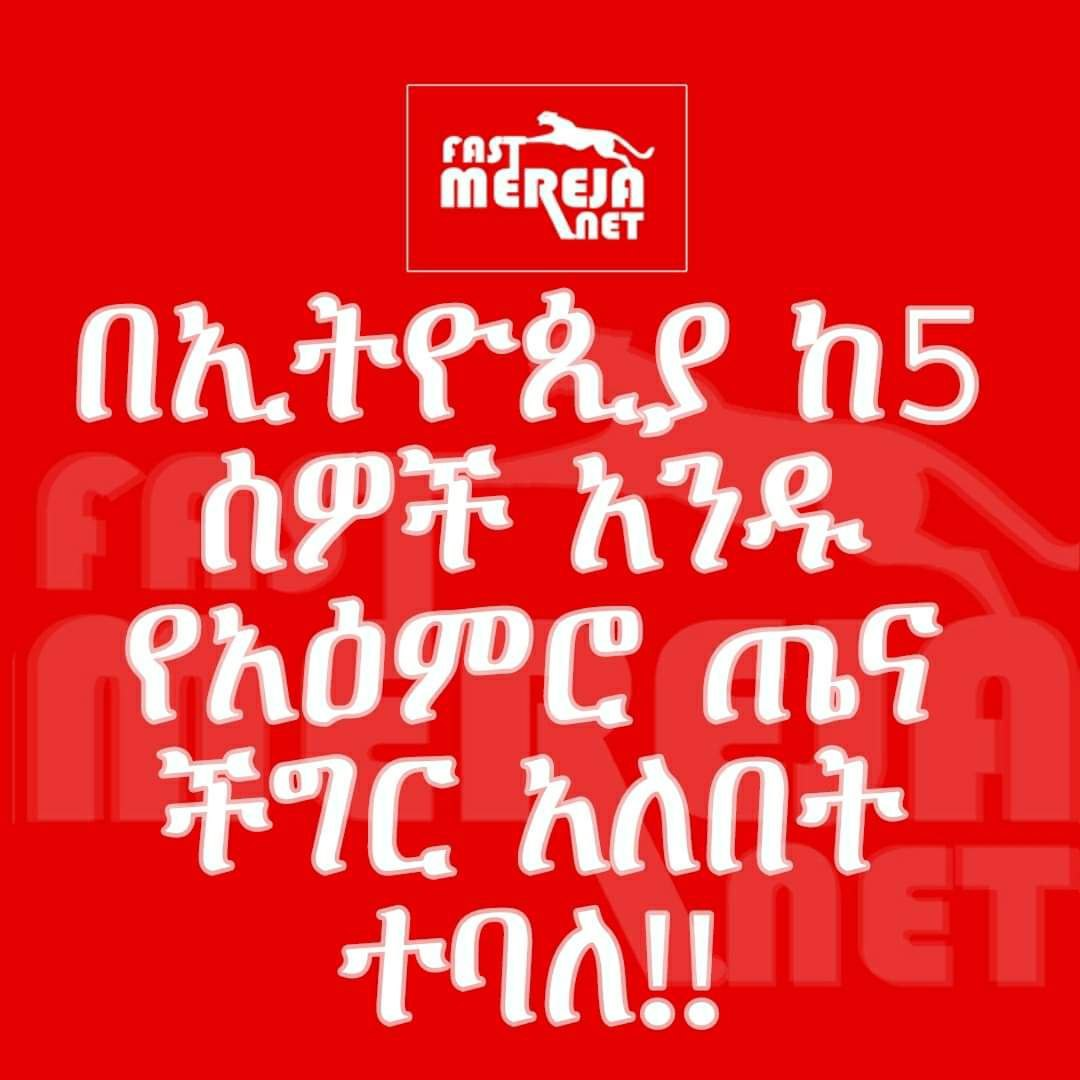 This week, social media information disorder was higher than the previous one , among which  reports of fresh offensives and counter-offensives had been the most highlighted topic . The belligerents have accused each other of launching offensives and of resorting to a violent means to the resolution of the armed conflict. Both issued statements trying to influence  the local and international communities.

As such reports reached a crescendo, social media disinformation campaigns and controversies began to emanate from the social media. Images and posts on social media emerged claiming that the ‘enemy side’ was being destroyed and taken advantage of.

HaqCheck fact-checked an image posted earlier last week on Facebook with a claim that the federal-government-led forces already started an offensive using drones, air, and infantry. The image attached to the post to prove the claim shows a burning and destroyed vehicle. The Facebook post has earned more than 55 shares on the platform. 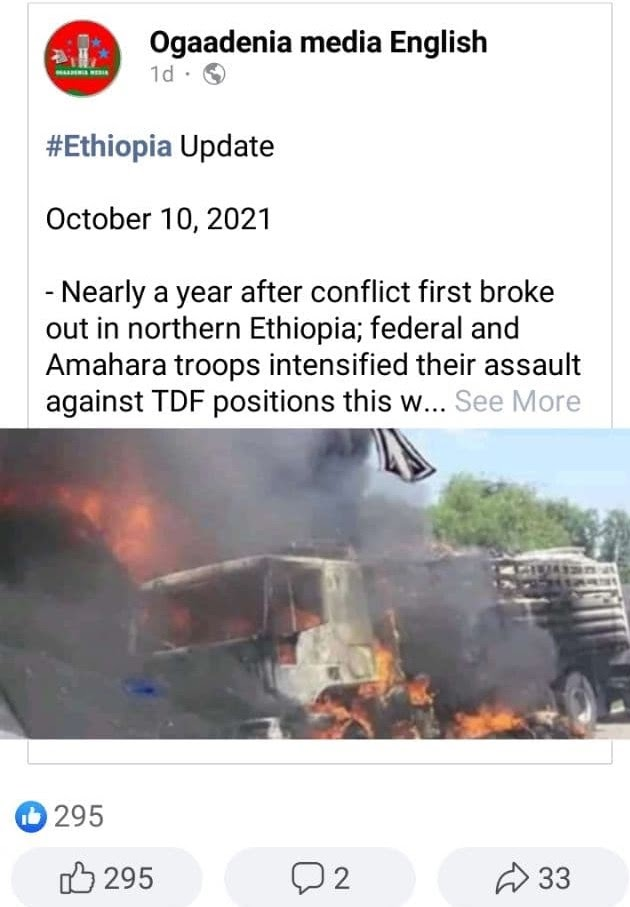 The image actually shows a vehicle set on fire by protesters in the Oromia Regional State in 2016. The incident happened during the Irreecha celebration  in which   many Oromo youths died in a stampede during  a crackdown to suppress an ongoing  protest. Consequently, a string of violent responses blazed all over Oromia triggered by the  saddening casualties.   In one of such incidents  protesters destroyed public and private properties belonging to the Nigerian investor Aliko Dangote. This included his cement factory in the town of Ada Berga was attacked and trucks were destroyed. The burning vehicle in the image was one of the vehicles of the tycoon’s cement factory that were smashed by the protesters.

As the armed conflict in the northern part of the country has persisted, the Ethiopian National Defense Force has been engaged in a concerted effort of recruiting new members and conducting training of cadets in various training camps.

Relevant to the matter, a video was published on a YouTube channel,  website, and Facebook page with more than 484,277 followers claiming that Tewodros Kasahun, aka Teddy Afro, a popular singer, surprisingly arrived in Tolay Military Training Center and entertained the recruits. 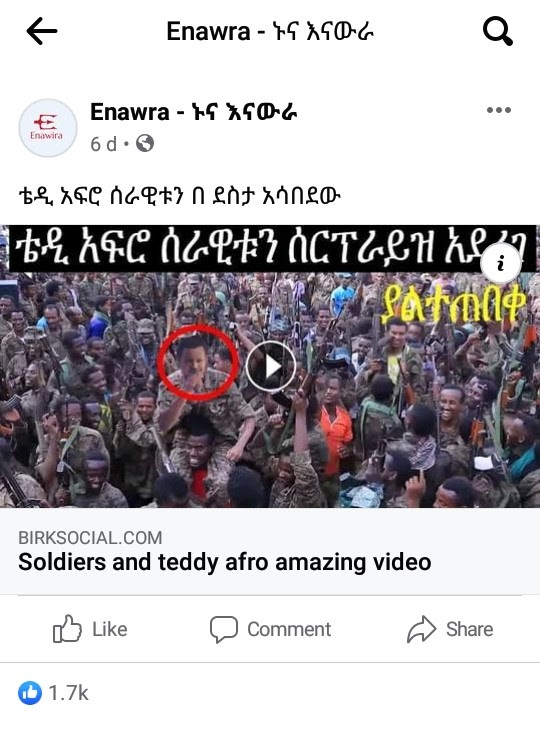 The video  is found to be manipulated and fake. HaqCheck looked into the thumbnail of the video and confirmed that it is photoshopped. The  thumbnail of the clip was manipulatively arranged by cutting an image of the singer’s head into another man among a crowd of recruits. Moreover, the video  is made up of a slideshow of various pictures of the vocalist and the army troops.

In our overview of  disinformation trends through the week, we came across a  social media content considered to potentially fuel the information disorder in Ethiopia.

We could learn that this YouTube video  has the power to incite violence and promote hate speech. The video featuring an interview with a “Fano” militia trainer  circulating on social media had raised controversies. The interviewee in the video was heard saying that they will kill hundreds of others for the killing of one of their own people.

We would like to appeal to  large international social media companies such as Facebook, Twitter, YouTube and Telegram to commit the due effort to prevent disinformation campaigns. We also urge that they should consider collaborating with local fact-checking initiatives in order to effectively verify claims before reaching many and incite violences.

HaqCheck calls upon government authorities to permit full access to information to media organizations and journalists so that the public can obtain sufficient information regarding matters that affect their lives.

Social media users are also advised to be conscious of the origin and intention of the unverified information they read and share with others. They should identify trustable pages and sources to understand the intention and credibility of the posts and claims.