False: The image doesn’t show victim of a massacre in Tigray

A Twitter account with more than 13 thousand followers posted a picture on Dec 23 2021 stating that the Ethiopian Government and its allies are committing massacres in Tigray. By the time this article was published the tweet had more than four hundred retweets and two hundred reactions.

However, the image doesn’t show a victim of the Ethiopian war and Haqcheck rendered it as False. 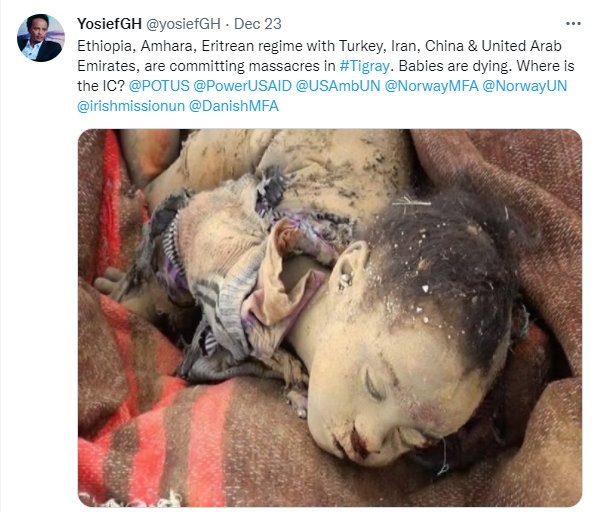 The war between the Federal Government of Ethiopia and the Tigray People Liberation Front(TPLF)  marked one year last Nov 2021. After staying in control of Mekelle for seven months,  the Federal Government declared a unilateral ceasefire and pulled out its troops from most parts of Tigray at the end of June 2021.

TPLF forces stated that they controlled Mekelle defeating the Federal defense force and would not accept the unilateral ceasefire. Afterward, TPLF had been advancing southward towards the neighboring Amhara and the Afar Regional States and stayed in control of several cities until reports of fresh military offensives and counter-offensives came out.

On Nov 22, PM Abiy Ahmed announced he is joining the war to undertake leadership from the frontlines that followed recapturing of several towns such as Lalibela, Dessie, and Kombolcha by government forces.

From the outset of the war, TPLF officials and some media have been reporting that The Federal Government was attacking civilians using drones while the Federal government stated that the attacks were on military targets not on civilians. Even though the federal government denied the killing of civilians with drone attacks, several videos and images have been circulating on different platforms of social media.

Recently, media outlets affiliated to the TPLF have reported that the Ethiopian government bombarded the town of Alamata and killed and wounded many civilians.

In such a context, Haqcheck came across one of the pictures that claims to show the massacre of civilians by the Federal government and its allies. After examining the picture using reverse image search it is confirmed that the photo was first posted on Dec 19, 2016 reporting a massacre committed by Saudi Arabia. 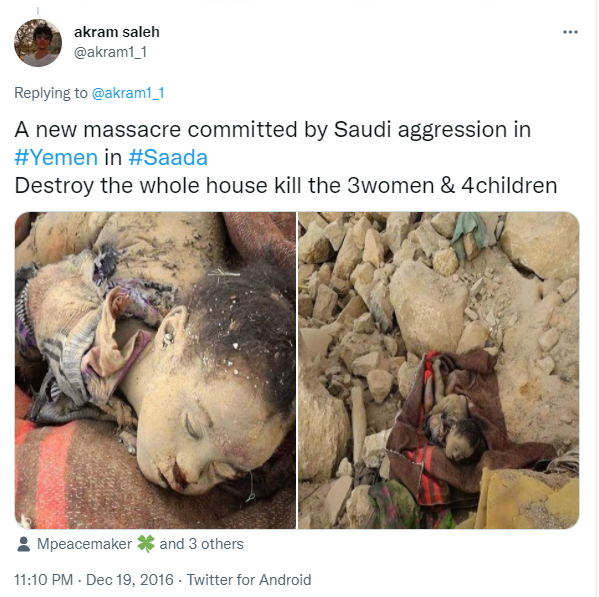 Hence, HaqCheck can find out that the image doesn’t show a victim of a massacre during the ongoing armed conflict in Tigray. Therefore, it is rated False.

Saba is a fact-checking intern at HaqCheck.