The beauty of Zengana Lake, surrounded by a densely populated variety of plants, can be seen from a distance. However, for those who descend through the woods and shrubs to the lake, the panorama of the peaceful, still lake is even more appealing.

The color of the lake is greenish blue - believed to be due to the reflection of the vegetation around - and the atmosphere feels as quiet as a monastery. Though Zengena is not well known by many, those who frequent it say it is the lake’s serenity which draws them back. 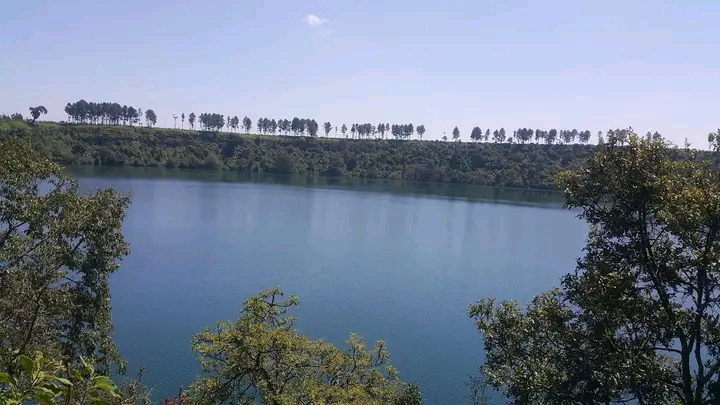 The oval-looking shape of the lake has a slight difference in length from east to west (930 meters) and from north to south (970 meters). The lake's total area covers 55 hectares, with an altitude of 2,515 meters above sea level. It is estimated to be 150-169 meters deep, with the water level fluctuating by 1.30 meters in the dry and rainy seasons.

Lake Zengena is surrounded mostly by pine trees. According to the information obtained from the Awi Zone Culture and Tourism Department, there are more than 75 different species of plants around Lake Zengena, planted by the people in the area as well as growing naturally.

Zengena is located 430 km from Addis Ababa, Ethiopia’s capital, and 120 km away from Bahir Dar, the capital of the Amhara region. However, as it is just one km away from the main asphalt road that runs from Addis Ababa to Bahir Dar, visitors can take a quick walk to stop by the lake. The nearest town to Zengena is Injbara, the capital of the Awi zone.

Visitors who wish to approach the lake by foot can take a leisurely walk through the woods down a road to the lake. The pebbled road is also suitable for cars. The three km road going round the lake was built during the Derg regime; and is still being used. However, there are also steps down to the lake for those who come on foot.

Monkeys, wild boars, hyenas, pigs, deers, hedgehogs, foxes, pheasants, and squirrels are found in abundance in the dense vegetation around the lake, according to the information from the Awi Zone Culture and Tourism Department.

The lake, along with its surrounding forest, is the home of various species of birds such as grebe, duck, goose, crow, falcon, jackdaw, dove, owl, and others.

Addis Zeybe spoke to Yaregal Tadesse, a young man visiting Lake Zengena from Bahir Dar. He says that what he loves most about the lake is its proximity to the main road. “It makes it convenient for visitors like me who come to the area by public transport,” says Yaregal.

Describing the place as quiet and full of beautiful trees and animals, he suggests it needs security bodies, or tourism police at least, just to provide comfort to visitors since there are no hotels or other service providers.

According to the Awi Zone’s Culture and Tourism Department, there was no fish in Zengena Lake until recently. Three years ago, experts who became aware of the situation released three types of fish - carp, boarfish, tilapia and barbel, into the lake to breed them. The tourism department commissioned this. The department says that the fish species called  Koreso (Tilapia) is currently abundant in Lake Zengena.

According to the 2022 report the zone’s culture and tourism department issued, only 24 foreign tourists visited the lake in the 2021/22 fiscal year, which earned the zone 3,600 ETB. On the other hand, more than 562,000 ETB was generated from 13,071 local tourists. This is a minimal figure compared to the number of visitors to other lakes, such as Tana - visited by more than a hundred thousand tourists annually.

Yonas Mekuriaw is a member of Injibara and Zengena Lake Tourist Association. Though the association has only four members, sometimes supported by their families, they assist tourists to get their way around the town and the lake.

Yonas says: “The number of people who come to visit the lake is very limited. Most of the people who visit Zengena are those who come to Injibara for conferences, because Injibara is one of the conference centers of the Amhara region.”

Lodges and hotels are about to be completed in the town of Injibara and Yonas and his colleagues hope this will encourage more visitors to come to the area.

Laykun Sisay, the head of the culture and tourism department, told us that many activities are underway to promote Lake Zengena through various media outlets though he admits more can be done.

Laykun added: “Different works have been done to make the lake comfortable for tourists by coordinating with the relevant bodies of Injibara University, the region’s Culture and Tourism Bureau and the zonal administration.”

Lake Zengena, as the people living in the area and those who visit it agree, might be a hidden gem in Ethiopia. The reasons for its limited number of visitors range from the inaccessibility of service-providing institutions to a lack of security bodies. The visitors we talked to agree that such accommodations could boost the flow of tourists to the area. The Awi horse riders at an event called ‘feres gugs’

Awi, the home of Zengena Lake, was established in 1993 and is one of the zones in the Amhara National Regional State zones. Its topography ranges from 700-2920 meters above sea level and covers an area of ​​857,886 hectares. The economy of the residents is mainly based on agriculture.

The zone is especially known for its production of honey and butter. The Awi people, especially the highlanders, have an old tradition of using horses for farming, transportation and sports, making the area one of the few places in Ethiopia with a large horse population. Injibara, the zone's capital, is located 445 km from Addis Ababa and 118 km from the capital of the region, Bahir Dar.

CURRENT AFFAIRSAddis Ababa
PREVIOUS ARTICLEDaddy and the Hustler: the battle for the Kenyan State House
NEXT ARTICLETPLF, OLF Shane, and citizens from neighboring countries aided Al-Shabab in recent attack: Government