The peak is called the ‘Roof of Gojjam’, contributing some 9.5% of the Blue Nile’s waters

Choke mountain from above, credit - Wikipedia

“A couple of decades ago Choke Mountain was the source of more than 270 small water fountain sources (springs) and more than 50 rivers. However, these water bodies have significantly decreased now,” says Mgbaru Wende (Ph.D.), a director at Debre Markos University’s Choke Mount Basin Research and Development Directorate.

Being unpreserved as a national park, and unprotected from human and animal interventions, the lack of a buffer zone surrounding the mountain means that deforestation can occur.  This has brought along with it a depletion of rare wild animals and plants. Combined with the expansion of farmlands and settlements to the highest levels of the mountain, there are multiple reasons why a source for the Blue Nile is endangered.

The range of hills along the  Choke Mountain pass covers an area of 53,558 hectares, with it being 4,088 meters high above sea level. It is the fourth-highest summit in the Amara region, with Ras Dashen being the highest in the region and also in Ethiopia.

The mountain, which is also known as the Roof of Gojjam, is located in northwest Ethiopia, East Gojjam zone, Amhara region.

The beautiful scenery of Choke comes into view just 10 km away from Digo Tsion, the major town of the Sinan district, East Gojjam zone. It is 61 km from the zone capital, Debre Markos, and 325 km from the Amhara region’s capital, Bahir Dar. 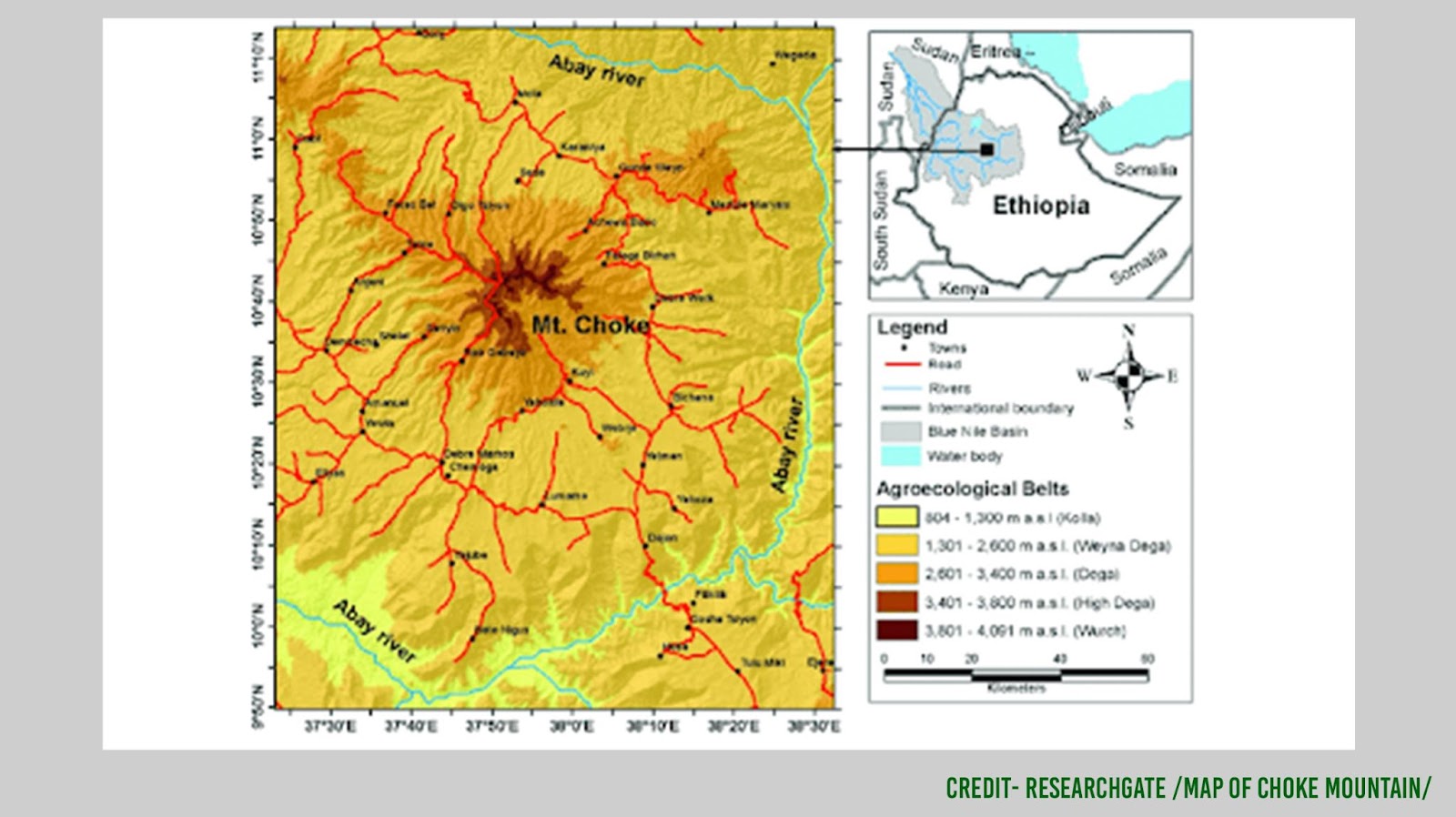 Though it’s home to springs and rivers and diverse flora and fauna, the snow-capped mountain has become endangered for different reasons.

Residents of the area say the tip of Mount Choke used to be covered with woods and snow, especially in the rainy seasons. However, this has decreased in recent years, according to them.

Megbaru added, years ago "more than 50 rivers have been tributaries of the Blue Nile, and Choke Mountain has contributed 9.5% of the Blue Nile’s water, which is 5 billion meter cube water per year".

As Megbaru described it, this has sadly changed in recent years; this in turn has a consequence.

"Since Choke is one of the sources of the Blue Nile water, the river itself becoming endangered and might have a negative impact on the Grand Ethiopian Renaissance Dam," Mgbaru explained.

"The impact of not protecting Mount Choke is not only for the Choke area but also for the country."

He added that the deteriorating situation at Choke Mountain might also be because of global climate change.

According to the director, Choke Basin is vulnerable to climate change due to its deep valley and mountainous dynamics.

In March 2021 the "Choke Treaty" was signed by 43 Ethiopian universities and research institutions to support the popular mountain peak by drawing attention to its possible extinction. 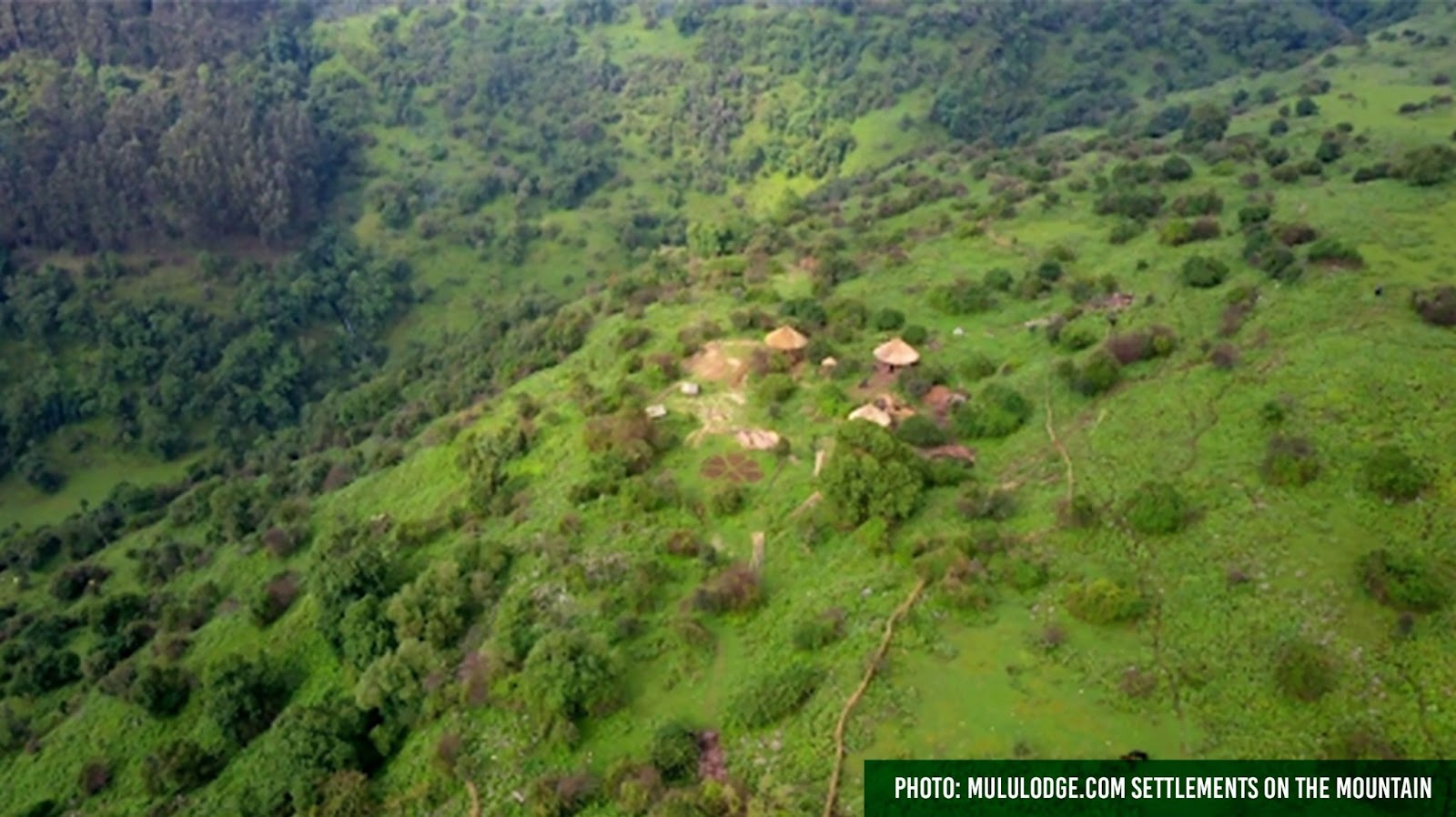 It was also aimed at developing Choke Mountain in a sustainable way since it is one of the main water tributaries to the Blue Nile, comprising 273 small fountain sources and 59 river sources.

Addis Zeybe has confirmed from the community in the area, the district officers, and Dr. Migbaru that nothing has yet been done, according to the agreement by the Ethiopian Universities and research institutions. The situation at Choke has changed from bad to worse even after the treaty.

Of all the universities, Debre Markos University is located in close proximity to Choke Mountain. That is the reason behind the establishment of the Choke Mount Basin Research and Development Directorate at the university a few years ago.

Megbaru also explained that the "Choke Treaty" has done nothing apart from merely signing it. The directorate alone had been doing a lot to recover Choke Mountain, according to him.

"The treaty could have played a major role to protect the mountain from all harm. But there's a lack of a commitment to put the agreement into practice,” says Megbaru.

According to Megbaru, Debre Markos University is carrying out research that involves its graduate students and experts under the Directorate. The research areas include soil and water protection in the mountain by exploring impacts on the ground.

Many plants suitable for the environment have been planted in Choke mountain, Megbaru said, as part of the university’s efforts to re-afforest the mountain.

In order to reduce the inappropriate human settlement around Choke Mountain, a survey was conducted to measure the density of the soil to indicate the direction of the population's settlement using a scientific method, Megbaru explained.

"We are also conducting a survey to identify available minerals on the mountain," Megabru added.

Girumnesh Feten, head of the Culture and Tourism Office of the Sinan District where Choke Mountain is specifically located, said that although overgrazing has decreased in recent years, it has not been completely stopped. 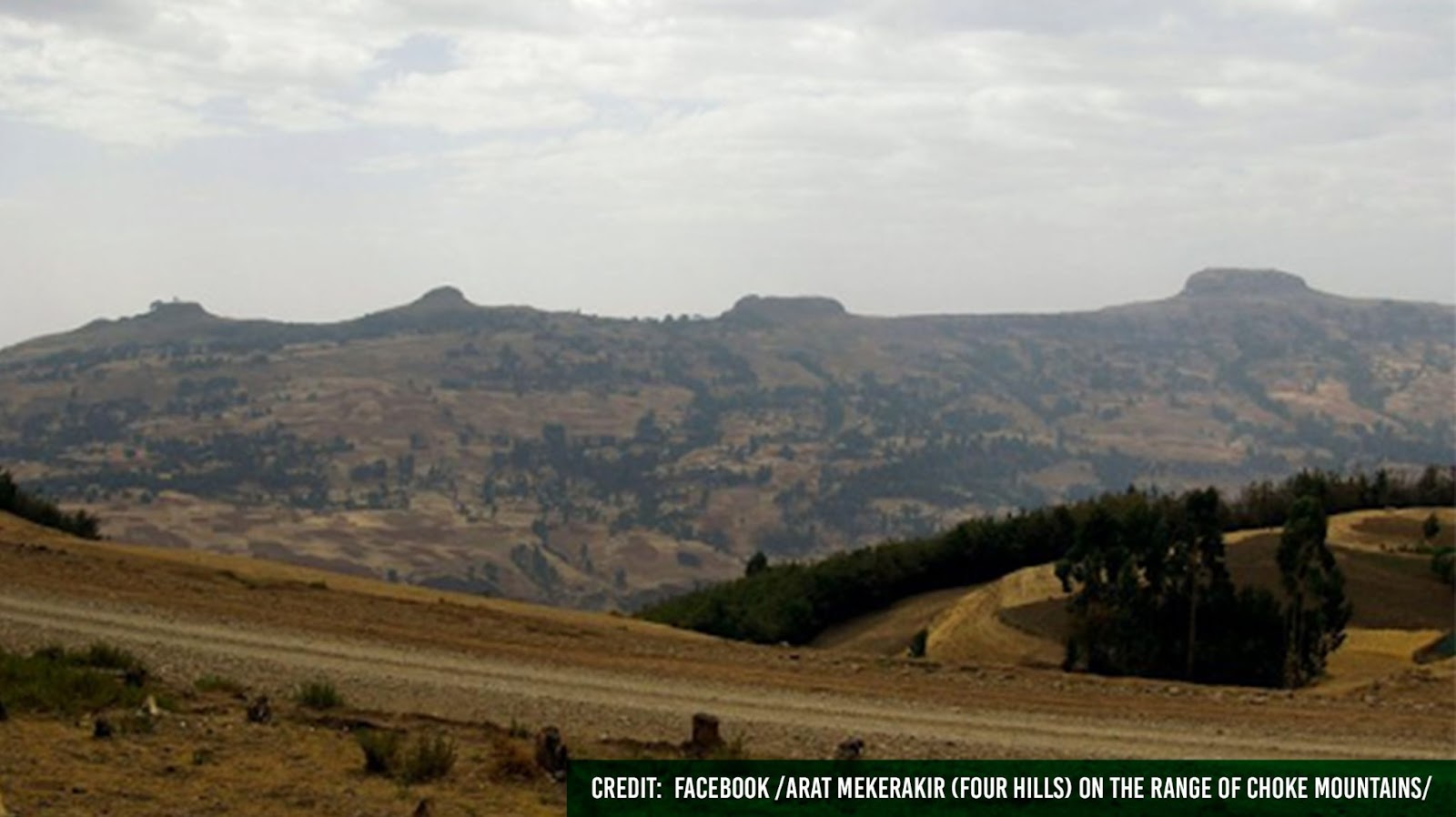 Girumnesh added that efforts are being made to protect against overgrazing, deforestation, and human settlement on Choke mountain by employing manpower and coordinating the community.

Over 500 hectares of forest on Choke have been recovered to be made into a buffer zone, which is free from contact with humans and animals, according to Girumnesh.

However, budget is one impediment hindering the restoration efforts. Megbaru says Debre Markos University alone cannot cover the overwhelming expenses of restoring the mountain to its former capacity.

In order to solve this serious budget problem, he mentioned that efforts are being made to get more budget by conducting international workshops concerning Choke mountain.

The central part of the mountain is mainly covered by the trees of Asta, with Amja sparsely grown.

The lower parts of the mountain have plants of Shola (fig), Lul, Kitkita, Acacia, Klabana, and Ambush grown while Jibra and Ashendye may be found as one goes up.

The amount of rain in the area is estimated at 900-1400 mm/per year. The temperature of the area reaches 0-degree celsius in the winter season, with the tip being covered by snow.

86% of Choke Mountain is a hilly area while the rest is a plain area.

Addis Zeybe’s reporter in Bahir Dar has learned that the tourism activities at Choke mountain are almost non-existent, apart from scattered efforts by a few individuals such as the Mulu Lodge.

Apart from that, high school teachers from around the area take their students up to the hills when they teach them about biodiversity.

The area is where historical and religious sites are found such as Molalit cave, Woi-Beyign cave, Arat Mekerakir (four chains of hills), and the holy water at the Zilan Zerabiruk Church. If preserved, it could also be a major tourist destination in addition to its former purpose as a major contributor to the Blue Nile river.

In his winning research, Tewodros explored IGAD’s contribution to peace and security in the Horn of Africa, what’s lacking from its efforts so far