The first signs of water hyacinth were observed on the surface of Lake Tana in 2011.  It became a concern when it began to widely spread across the lake in a short period of time.

Institutions and individuals living in the country and abroad, humanitarian organizations, and universities started taking measures jointly and individually.

In addition to the labor and financial support, hyacinth weed harvesting machines have been donated to help pull out the water hyacinth from Lake Tana.

Reflecting the public’s concern and efforts to clean the lake, the region established an independent institution named Lake Tana and Other Water Bodies Agency by proclamation to monitor and enforce that.

According to the Information from Lake Tana and Other Water Bodies Agency, the coverage of water hyacinth on Lake Tana reached about 900 hectares of the lake in 2012/13 of the 367,300 hectares of the lake, before anyone took any measures. The lake was covered by the rapidly spreading weed to a large extent, gradually expanding to the shores, affecting the lake by decreasing the water level. 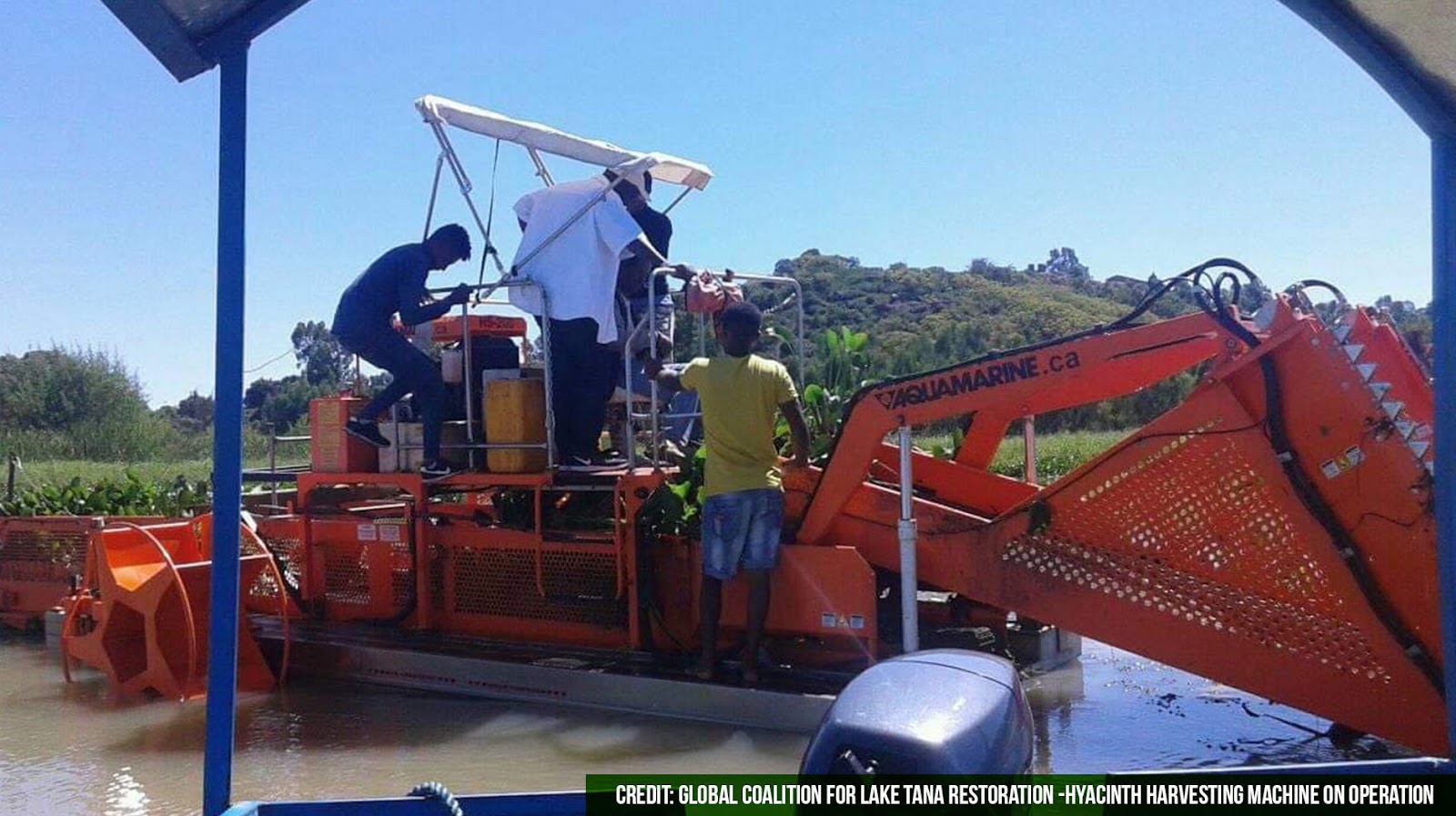 Manager of the Lake Tana and Other Water Bodies Agency, Ayalew Wonde (Ph.D.), says the most successful effort to date, to rid the lake of the hyacinth, was carried out in the year 2021/22. He noted that 90% of the hyacinth had been removed by local farmers and machines. "The weed’s coverage was reduced to 1000 hectares this June," Ayalew added.

However, it is feared that the coverage of the hyacinth might proliferate again because it has a characteristic of replacing itself quickly.

According to Ayalew, the peak season for it to bloom begins in September which consequently would increase the current 1000 hectares coverage. He cautions prevention measures should be taken before September.

It took a massive coordination work and mobilization of human labor and machinery to get down to the current 1,000 hectares from a massive coverage. 100 million ETB was spent in the 2021/22 fiscal year alone for the clearance of the hyacinth by the agency.

The water hyacinth is denser around the shores of the lake. It is especially abundant in the northern and northeastern parts of the lake, beside the districts of Fogera, Libokemkem, Gondar Zuria, and Debeya.

It’s not only the lake that is being affected by the hyacinth but the livelihoods of the local residents living in these areas as their lives are highly connected to the lake.

Among the notable institutions that carried out organized efforts to get rid of the hyacinth are the Global Coalition for Lake Tana Restoration, Bahir Dar, and Gondar Universities. The coalition bought and donated two machines that can help clear the hyacinth while Gondar University handed over one machine to the regional state. This coalition was established in 2018 by the international diaspora with the intention of doing different research on Lake Tana. Bahir Dar University, in collaboration with a non-governmental organization, purchased and delivered one machine as well.

Lake Tana and Other Water Bodies Agency currently own a total of five machines, deployed at the lake to remove the water hyacinth.

A third machine donated by the coalition was shipped to Ethiopia to be donated to the regional government.

Nigussie Demilew is one of the people who took part in the hyacinth removal campaign last year as a volunteer from a government organization. He said he observed that it’s only the farmers living around the lake that are fighting to clean the waters of the hyacinth. “I didn’t notice any machine operating over the lake. I heard they are not being serviced as well,” he said. He noticed this despite being on the site for more than 45 days by coordinating the cleaning campaign.

The people who volunteered from the city of Bahir Dar as well as the farmers living around the lake told Addis Zeyebe that the machines are not providing any service at the moment except voluntarily organized campaigns of weed removal.

However, the Manager of the Agency, Ayalew disagrees. “The agency is facing problems concerning maintenance. We don’t have a garage to repair parts of the machines. We also don’t have an independent port to move the machines before and after they operate,” he said. He added excavators and big trucks are also part of the removal process. 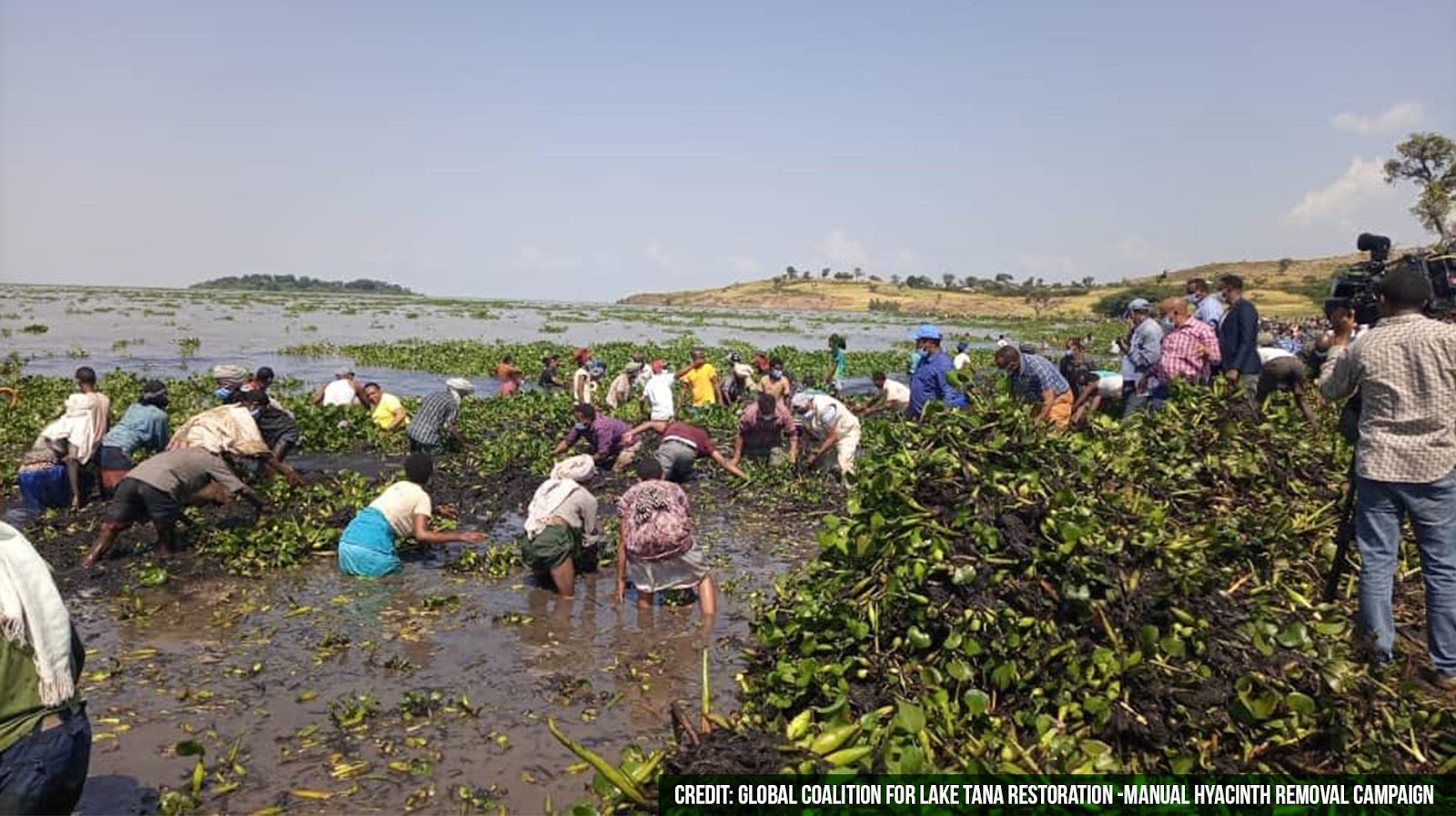 A system should have been built to transport the waste after the machines remove the hyacinth from the lake, according to Ayalew. “Currently, there is no such system and that is another problem we are going to deal with.”

Addis Zeybe spoke with  Solomon Kibret (Ph.D.), Chairman of the Global Coalition for Lake Tana Restoration told Addis Zeybe that the coalition handed over two hyacinth removing machines with their complete spare parts along with training to machine operators and that a third machine was on the way.

“We went to great lengths to provide the machines that the government couldn’t afford to import because of high foreign currency exchange rate. It is now the regional government’s responsibility to protect and effectively utilize the machines,” he remarked.

We’ve talked to him again this week and he shared with us his thoughts on the current status of the machines. His association has been talking with the regional government on the division of responsibilities.

Indicating that understanding the seasonal trend of the lake is important, Solomon said the machines may not be used during the dry season as the water level decreases. However, he stressed the need to use the machines during the blooming season of the hyacinth; which is from September up to December. In so doing he recalled the weed removal process was successful last year, decreasing the amount of its coverage by 60%.

“Our responsibility was to provide the machines. We did that. We also brought in the third machine. Now, it’s up to the regional government to properly use the machines and remove the weeds,” said Solomon.

Lake Tana is the largest lake in Ethiopia. Known for its freshwater, lush shorelines, and rich birdlife, the lake also surrounds 37 small islands that are home to 19-century-old monasteries, full of mysteries and treasures. Most of the monasteries were built during the 14th century while some of them go as far back as the 3rd century.

Located in the capital of the Amhara region, the lake is a significant tourist destination site in the region. Surrounded by ten woredas from the Gojjam and Gondar zones, Tana is the source of the Blue Nile and where Beles hydroelectric plant is stationed at. Lake Tana is also the largest fish-producing lake in the country.