The Shift in the Ethiopian car market: From Toyota Vitz to Suzuki Dzire

The 2021 excise tax proclamation on used cars, which was as high as 260%, forced importers to turn their faces to new cars

Assegid Gebeyehu is an Amharic editor in Addis Zeybe and is a graduate in Journalism and Communication.

My three friends and I left home to buy a sheep. The four of us have a habit of chipping in to buy a sheep and share the mutton among us for holidays. We went to the Mesqel Flower area in Addis Ababa, where there’s a sheep market. While we were still looking for one busy bargaining for a lower price, a fifth friend joined us.

“Haven’t you guys bought the sheep yet? I have sold two cars while you were still looking,” he said with pride. “How come! Have cars become commodities easily bought and sold?” I asked.

That day, I noticed that the roads were filled with new automobiles, most of them being Suzuki Dzires. That conversation with my friend urged me to visit car dealers.

“A new car you can find with a reasonable price in town is Dzire,” says Abebe, CEO of Beki Car Import.

Abebe has spent many years in this business and says he imports new and used cars and puts them on the market. “Two years ago, the government announced a new excise tax proclamation on used cars. For this reason, we started importing new ones. The demand for cars is more than the supply on the market. Cars have become a necessity,” says Abebe.

A university graduate whom I met buying Suzuki Dzire told me that he couldn’t find a job and his family is buying a car for him to start a taxi transport business. He had tried to buy a used car first but the price was high.

“I tried to buy a used Toyota Vitz but the price was high. Then I decided to add a little more money and settle for Dzire,” he said. 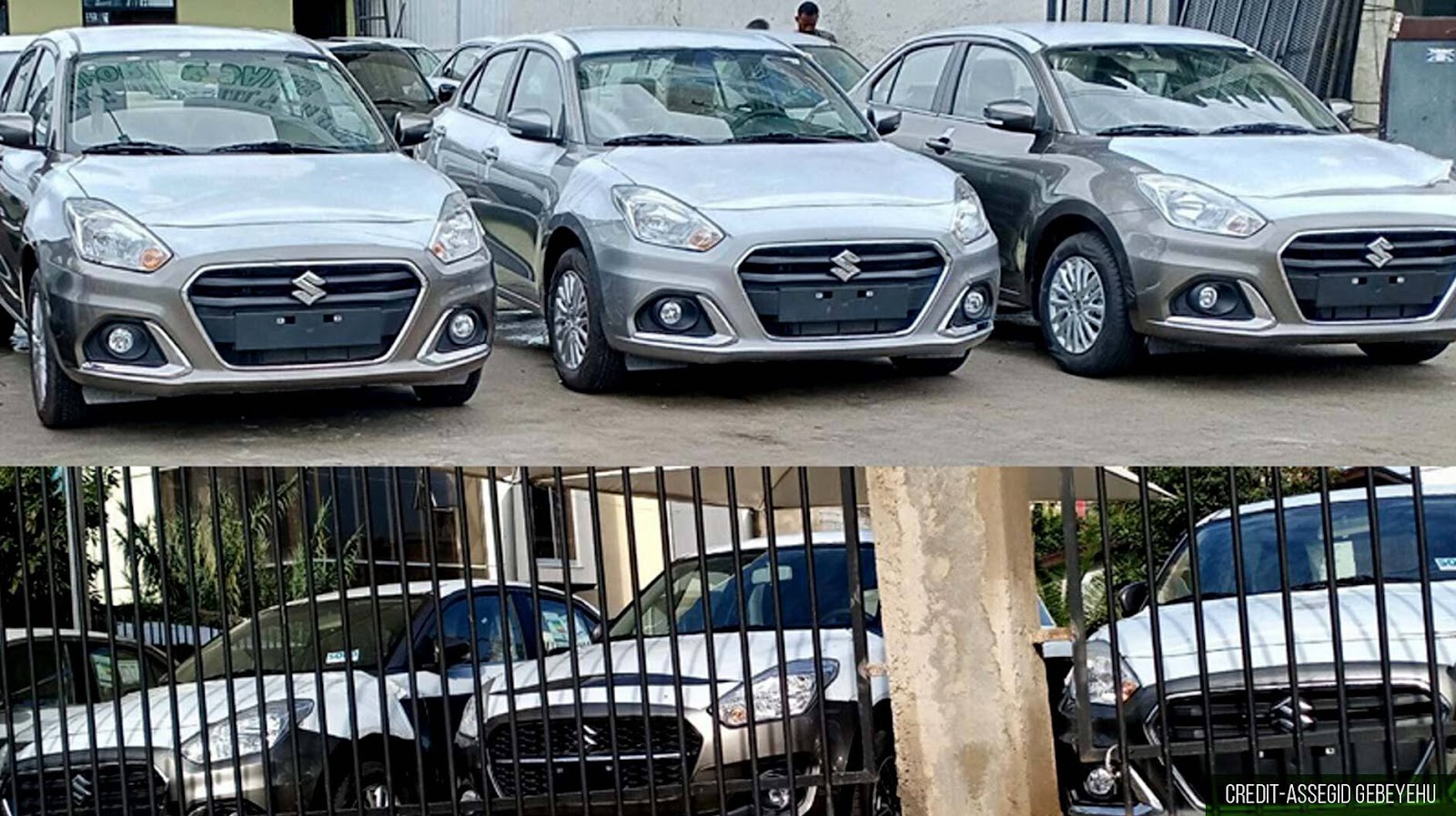 The 2021 excise tax proclamation on used cars increased the tax rate from 30%  to 110% for cars driven up to 2 years, and for those driven up to 7 years by 260%. This forced importers to turn their face to new cars.

According to Moges Negash, an automotive professional and General Manager of Halel Car Import, the major reason for Suzuki Dzire to be the newly favored car is its capacity to travel up to 18 km per liter of fuel. “Apart from its fuel economy, its being semi-automatic and convenience to Ethiopia’s weather conditions made the car the most preferred at the moment.”

We can say the Meskel Flower area in Addis is the center of car markets, followed by Kera and Bole Brass areas. I’ve counted 23 car dealer shops on the 3 km road from Denbel building down to Gotera intersection road. The cars are parked with an alluring pattern to attract customers; the most notable ones being Suzuki Dzires.

Moges says Dzire is currently being assembled in India though Suzuki is a car manufacturing company in Japan. “The car is now very popular in Dubai and other Middle East countries. Its fame has now reached Ethiopia with its mass production and affordable price.” 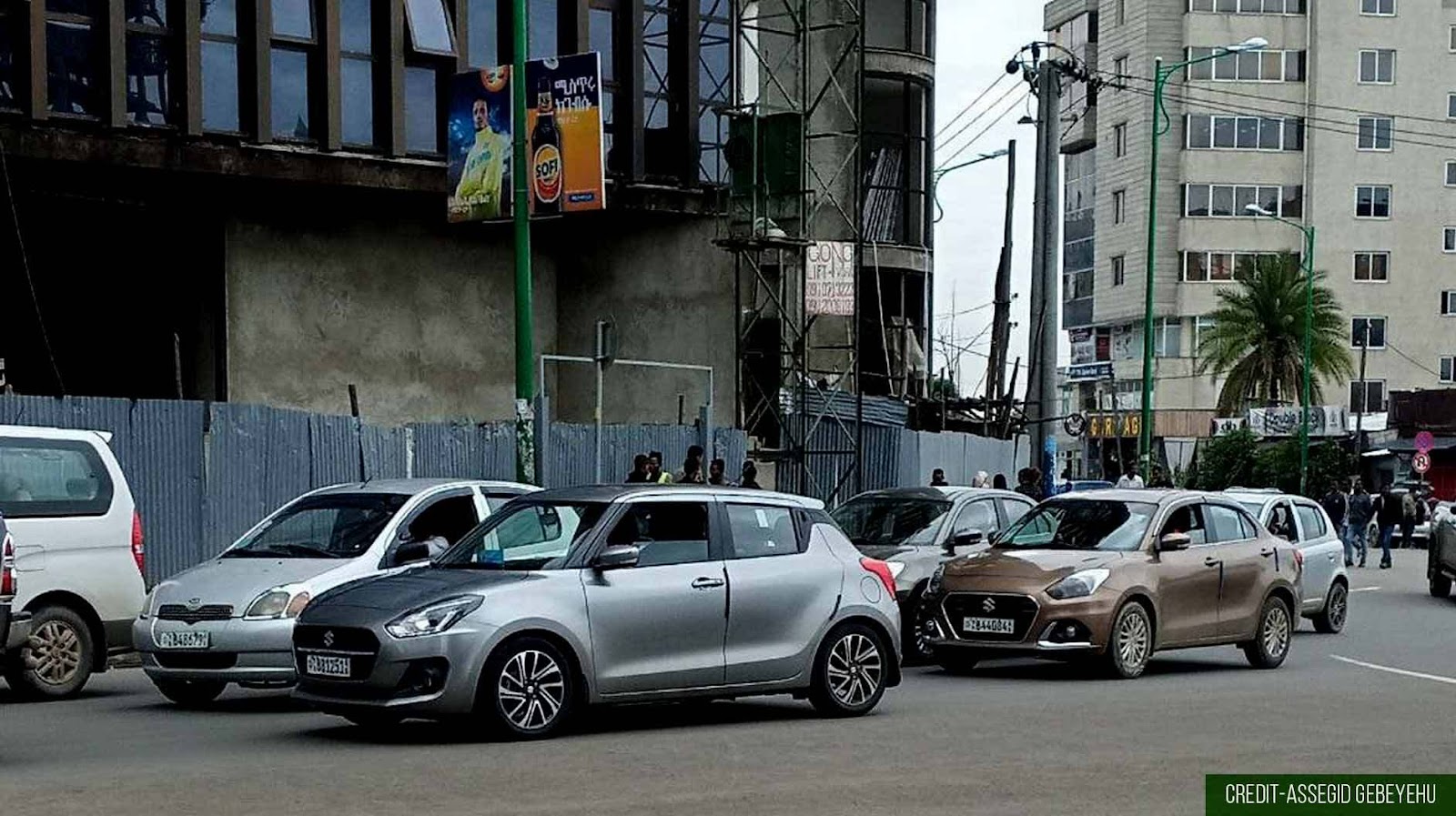 The current higher inflation rate in the country and the soaring price of commodities don’t seem to be affecting the car dealing business. Cramming up and overflowing the companies’ compounds, Dzire cars are even parked outside on the streets, crowding up the space.

A broker told me that some investors buy such popular cars and keep them for months until their price increases. Such moves can gain a person up to half a million ETB profit. The purchasing power of the Ethiopian birr is declining from time to time and people prefer buying cars and valuable assets to saving cash in the bank,” says the broker.

“What’s the reason behind the car dealing business booming at such a high rate?” one may ask. Of course, there’s a high demand for cars. Is the government still providing some kind of encouragement for the business to mushroom?

On the contrary, the car dealers say there’s a shortage of foreign currency and an exhausting taxing tradition that is impeding their businesses.

The other reasons cited for the business to proliferate are the fact that anyone with an importer’s license can enter the car import business and banks and financial institutions are facilitating loan systems for clients to buy cars.

“Because of the transportation hassle in the city, my friends and I took loans and bought cars. Since buying a house is too expensive, we chose to own cars,” says Sisay Assefa, a banker.

The inadequate transportation service in Addis Ababa is encouraging many to buy cars and join the ride-hailing businesses. There’s a recorded number of over 100,000 cars registered on the ride-hailing services. People in Addis are accustomed to booking a ride to go around the city and this is attracting many to start the business.

A young man I met around Piasa has joined the ride-hailing business with a loan he obtained from a bank.  He told me that he bought Dzire six months ago and is still working and paying up the interest. “It’s amazing that the car has shown a 300,000 ETB price increment since I bought it,” he said.

Suzuki company is known for manufacturing vehicles ranging from motorbikes to larger ones. The car dealer, Yohannes, says, “Vitara, a product of Suzuki, was once very popular in Ethiopia. Now it has products like SWIFT and S-PRESSO but Dzire is the one preferred here now.”

Having a 4-cylinder engine that generates 82 horsepower, Dzire has a 37 liters fuel tank and 170 km/h maximum speed. The company’s manual shows that the car consumes an average of one liter per 16.7 km.

Tigist is a car salesperson at Afrolink company. She points out that buyers are interested in specific car colors apart from their models. “The silver and gray colors are popular now. Cars with such colors can cost an additional 50,000-100,000 ETB.”

If we take a glance at the streets, we see them filled with Dzire automobiles of certain colors. Those parked for sale are also mostly painted silver and gray. We leave the reasons for this for psychology experts to study. However, Yohannes says paints of such colors are easily re-paintable if the body (surface) of the car gets damaged in an accident.

Products of Toyota have been the most favored cars in Ethiopia. A few years ago the roads used to be populated by Vitz, Corolla, and Yaris models of Toyota. However, in recent times, Suzuki Dzires are the common ones.

Moges believes the Toyota Vitz models will not return to the market since it is no longer being manufactured. “Toyota Corollas will sustain in the market though given their worldwide acceptance. There’s also demand for the other car brands assembled in Ethiopia. But they are manufactured in a limited number and get sold out quickly”.

Japan’s Suzuki is one of the prominent car manufacturers internationally. Established in 1909 and it supplies the market with 3 million cars annually. Apart from Japan, it has manufacturing branches in Hungary, Thailand, India, and Malaysia. It currently has 3.3 trillion USD capital, according to the company’s website.

Toyota, the brand that entered the Ethiopian car market in the 1970s and gained popularity, is also a leading car manufacturing company in the world producing 10 million cars annually. It has 562 billion USD worth of wealth currently.

The Lommi project took the Ethiopian proverb "50 lemons, a burden for one, a jewel for many", as a motivation.