Apart from imparting positivity, love and hope, Rophnan promotes the diverse cultures of the nation in his songs.

Hiwot is a senior content editor at Addis Zeybe. Passionate about literature and writing, she is an author and former English news anchor at Addis Media Network.

Many Ethiopian musicians have made attempts to produce albums that respond to the diverse language, culture and traditions the nation cradles. Tewodros Kassahun’s 2018 ‘Ethiopia’ album is one good instance.

With peculiar melodies, the electronic genre laced with traditional ornaments, the singer came up with the 2022 album, Sidist (VI).

Sidist literally means six. Preceded by his debut album, Reflection, and the hit single III (Sost-three), Rophnan has released his second album IV (Sidst-six) in July with 17 tracks included on it.

Dessie, Wogahta, Gobe, Haya, are among the songs on his album, recorded by Universal Records, that are deeply rooted in Ethiopia’s multicultural, diverse colors, tongues and tunes.

Rophnan writes his own lyrics.

The verses are no abstract patterns, picturing some vague or abstract notion. They are real, close to our routines, tied with everyday happenings. We know them in our conversations, in our humors, in wordplays we have known growing up.

They are usually short, swift and witty; delivering the message with a flavorful punch.

His most played song, Dessie, is layered with nuances as it soulfully addresses his optimism that love knows no boundaries.

Love and two distinct places interplay in the verses of the song: him from Sheger (Addis Ababa) and her from Dessie (the capital town of Wollo in North Ethiopia).

Wollo is a province in northern Ethiopia -  to which its capital Dessie is known to be the melting pot of an Ethiopian interaction. It is a place where at least four of the ethnic groups - Amhara, Oromo, Tigray and Afar live together.

With this in mind, Rophnan adds flavor and essence to his song, Dessie, including Afan Oromo verses to endear his loved one:

Calling the names of places around Dessie, accompanying them with slang peculiarly associated with that area like Mejen and Abo, Rophnan takes us to Wollo, the place also known in Ethiopia as a cradle of beauty.

His depiction of love is usually positive.

Rophnan has an ability to personally engage his songs with the listeners. One mechanism is inserting names in the lyrics like Aynalem in Dessie and Belay in Tawkialesh Yihon.

Pun is intended here as Belay means “more than” as it can also be a person’s name.

In the song, Wogahta, Rophnan mentions himself and his aunt, letting us in on a family humor, regarding his hairstyle.

If one thing can sum up Rophnan’s lyric writing style, it is word economy. He can say a lot with just bits and pieces of phrases.

Rophnan goes on with his simple yet powerful verses, waving “De bel ande, De” - the entry words for the familiar wordplay in Ethiopia called Enka-selantya with his apparent fear of being exposed, of being wrong. He seems afraid of his imminent admission of love to Belay, a female friend.

It’s both playful and yearning; fun on the outside with serious undercurrents. 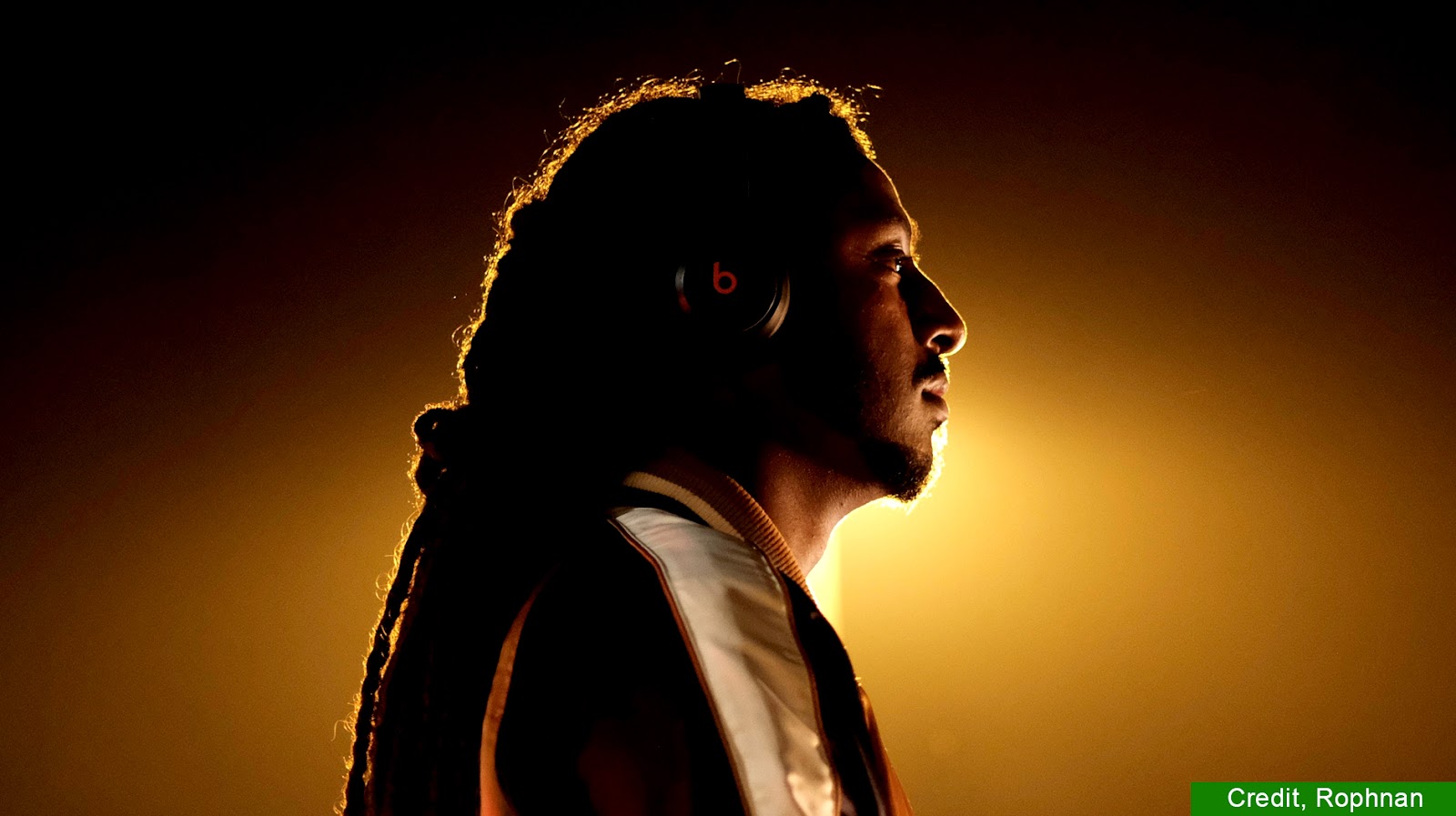 Apart from imparting positivity, love and hope, Rophnan promotes the diverse cultures of the nation in his songs. The lyrics cover Wolaita's popular skills of garment making and tailoring in South Ethiopia to Lalibela, the rock-hewn churches in the North.

Life, time, human, love, seasons, places are among the dominant subjects in his lyrics. He explores these concepts, illuminating them with electronic melodies. Engaging us, his listeners, talking directly to us, asking, he keeps us in the world he creates in the songs.

He preaches love, celebrates seasons, places and life in general. His two songs, Merkeb (Boat), and Hiwot (Life) can best delineate these thoughts.

Though Rophnan is all about love and positivity, he can also be a harsh social critic. His song Qal (Word) testifies to this.

Emphasizing on the power of word, He goes on to chastise the modern-day trend of using smartphones, and social media to just throw words around without meaning them. He mocks us saying we use our physical invisibility on social media platforms, and react to posts with emojis, without actually meaning anything by them.

In his lyrics, Rophnan assumes the city boy persona who is modern, adaptable, curious, and adventurous. He is stationed at the heart of the country, Addis Ababa (a.k.a Sheger), but goes out and reaches different cultures in the country he loves. In his song, Haya, he speaks in the tongues of his loved ones, understands and celebrates their peculiar colors.

From the hip-hop beats in Wogahta to the soulful, melancholic melodies of Tawkialesh Yihon;  from the reggae in Merkeb (featuring Julian Marley) to Essey’s techno beats, Rophnan has experimented with all kinds of music genres in his new album, VI.

Rophnan draws his musical energy from electronic sounds, blending them with folk tunes and traditional instruments.

The current Ethiopian music audience is accustomed to the musical tunes that have been developed and evolved over the past half a century. Different songwriters and composers have experimented with different styles. Still, they haven’t gone far from the melodic pillar to which our songs are usually attached too.

Rophnan seems to break that existing trend with his multi-layered tunes of different origins infused together.

Though Rophnan is said to bring a paradigm shift to Ethiopian music, the new form is still decorated with the tunes that Ethiopians have been associated with for ages.

For example in the song Dessie, as Rophnan says random words, repeatedly, methodically, the melody embraces his voice with the traditional beat that Ethiopians easily recognize to be from Dessie (Wollo).

The erikum beat, usually packed with a simple one tap drum and the tuneful single-stringed lyre called mesenko, is fused with the electronic sound, giving the song Dessie a feel of the actual place.

What arguably stand out melodically in this album are the songs Gobe and Fole. Gobe is a simple, yet sophisticated song, based on the New Year plays of Oromo men.

When September dawns, it’s New Year for Ethiopians. This entails strings of celebrations. The atmosphere all over the country changes into a festive one, as the rainy season comes to an end and flowers bloom, rivers become clear.

It is during this time that a group of rural  Oromo men come to towns and cities, holding their canes, grass and flowers, singing the song Gobe.

As city dwellers, these tunes sung with Afan Oromo are part of our memories. Rophnan has taken our memories and immortalized them in the songs.

The new album is on Youtube with Rophnan wearing a futuristic head appliance, you may call it an avatar-ish, eye-glasses replacement if you will. Wires are attached to the machine and to Rophnan’s body, their invisible other ends going up into the limitless blue space surrounding him.

Through his glasses, Rophnan sees infinity - the symbol he chose for the particular album. The titles of his songs rotate around his head. Of the multiple random patterns drawn on the sweater he is wearing - a cat, the sun, a flower, a tree, a ball, a heart. The heart stands out, beating to the tunes of his song and drawing the attention of the viewer into it.

Is Rophnan highlighting love in his songs? Is he preaching it? For someone who heard his songs thoroughly, the answer is yes.

To his right, the lyrics of his songs roll up in Amharic. If the lyrics are in another language, they are translated and rolled up to his left.

Two short videos are slotted in the 15 tracks of songs where children's drawings resembling the ones on his sweater are displayed, with Rophnan cheerfully talking to six children.

In the search of the inner child within, VI was born! And here are some of the paintings we got from the actual 6 year olds who inspired me to create my album.

This is what Rophnan tweeted on October 23 telling us that he named his album after the six children he chats with in the two short tracks. They are Amira, Ikram, Mihret, Baby, Mititi, and Remedan and they are all six-year-olds.

The visual effect on YouTube is artistically synchronized with the songs, especially in the song, Essey.

In this album, he has featured singers Kismaw, Mahlet Negash, Meswani, the Merewa Choir, Julian Marley and others.

Rophnan Nuri Muzeyin, the pioneer of Ethiopian electronic music, has continued to dominate the Ethiopian music industry as he did the past four years.

Wogahta and Dessie are the top two most listened songs on Spotify, played close to 200,000 times each. These same songs are the most viewed on YouTube with 2.8 and 2.2 million respectively.

OPINION
PREVIOUS ARTICLEQueen Fura of Sidama: a scourge of men or a champion of feminism in Ethiopia?
NEXT ARTICLEErmias Amelga and Co to launch Alibaba’s service in Ethiopia

Parties involved in the harassment should be brought to court by prompt and concerned law enforcement bodies.