Adama is a town with about 500 thousand inhabitants, located in central Oromia, 100 km from the capital, Addis Ababa. Estimated to be 31 sq km wide, the town is situated near the potentially irrigable area of the River Awash.

However, markets in Adama are usually short of vegetable and fruit supplies. And would be expensive even if available.

According to the International Food and Agriculture Organization - FAO’s 2016 estimation, Ethiopia has the potential of 2.7 million hectares of irrigable land and has 40 billion cubic meters of groundwater, as well as 122 billion cubic meters of surface water resource. However, the report says the irrigable land utilized so far is not more than 5%.

For this reason, food security has always been an issue in Ethiopia. The rainwater-dependent Ethiopian agriculture is vulnerable to climate change effects. Especially in recent past years, shortage of rain, rainy season alterations, high floods, and other effects have put agricultural activities in crisis.

There is a big contradiction between the country's potential to produce crops, vegetables, and fruits, and the actual yield. The 80% farmer population of Ethiopia cannot feed itself, let alone the 20% urbanite.

Ethiopia, with all its resources, a large labor force, and several private and public banks to facilitate the finance, is still dependent on traditional rain-based farming. The harvest is low and seasonal with the markets suffering from high inflation.

The current inflation rate, according to the Central Statistics Service reaches up to 34%, the food items having the biggest dividend on inflation.

In these circumstances, the government is currently engaged in promoting small and less-resourced urban pot farms rather than tapping the huge potential outside of the towns and cities. Is there a rationale behind this?

What does urban agriculture mean? Is it new for Ethiopia?

In Ethiopia home gardening, especially growing flowers and other ornamental plants is an age-old practice. Traditional herbal medicines are the main part of gardening. Apart from these, many Ethiopians living in towns and cities grow vegetables, such as collard greens, lettuce, pepper, and tomatoes, that can be harvested in a short period of time. Why is the government promoting this as something new?

In recent years, with the growing population of towns and cities, condominium houses are replacing individually owned compounds. This newly created shortage of land is affecting the long-standing practice of gardening. Still, many condominium residents use pots to plant vegetables and herbs.

FAO states in 2013 that around the globe, there are 200 million urban farmers who supply food to 700 million people, or about 12 percent of the world's population.

When farmers were away at war during the two world wars, vegetables and fruits planted in individual residences and public parks known as Victory Gardens, in the United States and some parts of Europe, fed citizens. 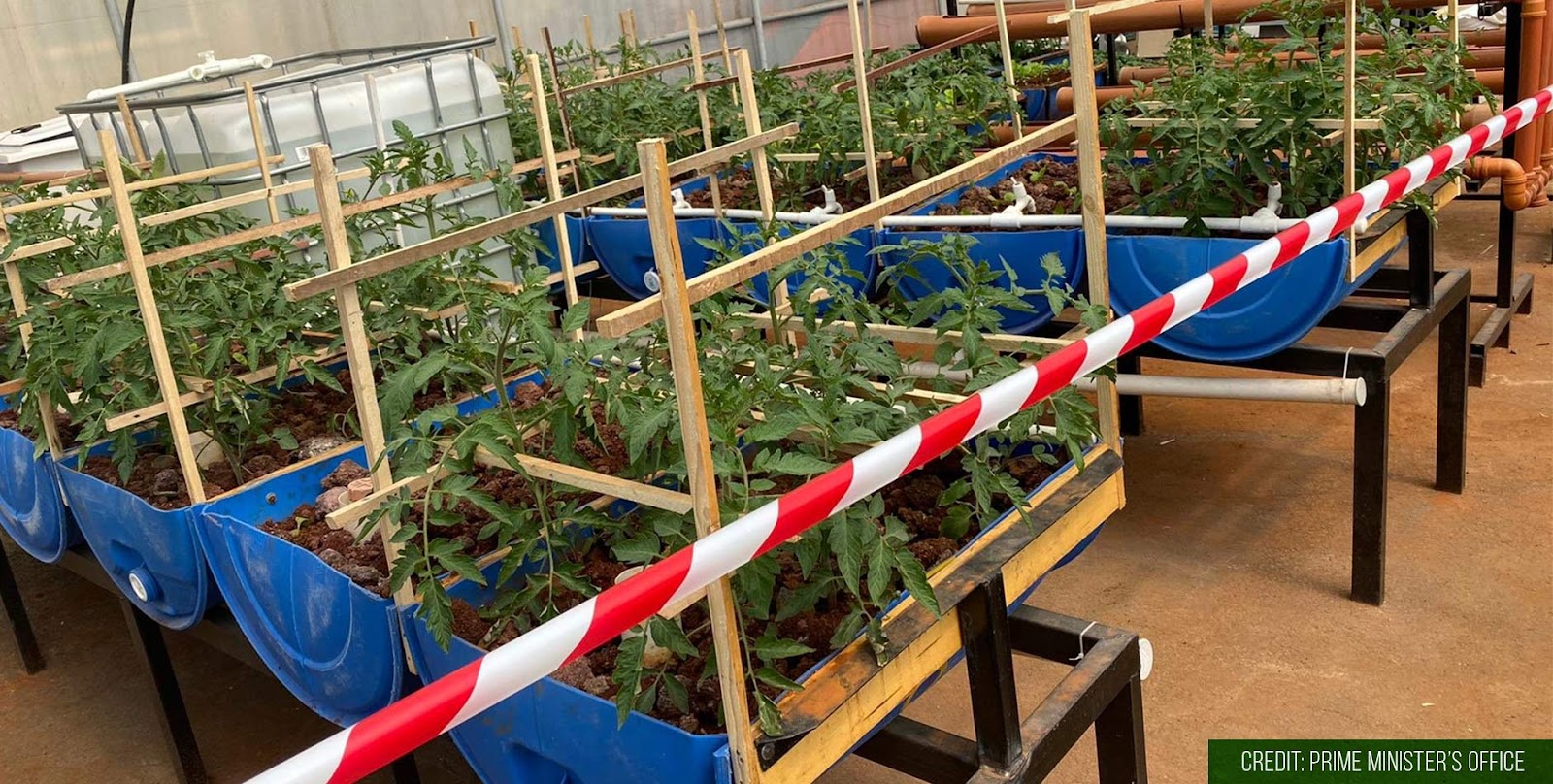 The other country, recently associated with urban farming, is Rwanda. A 2019 article entitled, Kigali, Rwanda: Urban Agriculture for Food Security? indicates that Kigali City Council’s plan to use all free space for agriculture is highly related to the scarcity of land in the country.

The circumstances in these different settings might have called for a quick fix (urgent solution) and urban farming might have come in handy.

What is Ethiopia’s driving motive to promote urban farming in such a vigorous manner when it has vast, untouched arable land in rural areas? Why urban farming?

The question could go otherwise though. Why not?

Let’s say, urban farming is done with urbanites taking the matter seriously and planting as much as their property allows them. Still, would it ensure food security? Is it possible to presume that Ethiopia's food security could be ensured by urban farming while rural farming is not doing the deed?

The United Nations Committee on World Food Security says food security is ensured when “all people, at all times, have physical, social, and economic access to sufficient, safe and nutritious food…”. FAO derives four main dimensions from this concept: availability, access, utilization, and stability of food. However, in this article, we are talking about the basic accessibility of food.

Are urban areas in Ethiopia suitable for agriculture?

Large populations characterize cities and towns in Ethiopia. Most city and town dwellers live in densely populated neighborhoods or condominiums while a few others own decent houses with fenced compounds. As land is owned by the government, no one can touch barren pieces of land for any kind of use. Renting or purchasing is unaffordable for many as the price is very high.

We can take Adama as a case. Most of the legal residential areas are 105 up to 200 sq. m, mostly used for building houses.  And the price for 1  sq. m of land is on average 50,000 ETB. As most residents struggle to be able to pay rent for small compartments, thinking of having extra land for ‘urban farming’ might be considered a luxury.

Apart from the shortage of land, water supply is another strain for the Ethiopian urban areas. The repeated water supply interruption and long-stay outage make any kind of cultivation thoughts illogical.

Given these circumstances, Dawit Damtew - an irrigation farmer along the Awash River near Adama, calls the government’s attention and media coverage of urban farming a camouflage, an attempt to cover up the actual challenges of regular farming.

The current high price of agricultural inputs, such as fertilizer, is putting pressure on the country’s economy as most of them are imported with foreign currency. Still, the government dominates the supply of the inputs though there are several unions and individuals contributing their share. He says the case of urban farming is not different from this.

“Rather than dwelling much on the unimplementable plans of urban farming, the government should give more attention to irrigation farms as mass crop production can be realized through them,” says Dawit.

He further notes that Adama is a small town, with most of its land taken up for building houses, business centers, and other buildings. Yet, Awash River runs free just outside of the town with lush plains on its left and right, mostly unattended.

Simneh Bessie (Ph.D.), an economist, disagrees with Dawit. He says, "Whether the place is urban or rural, it doesn’t matter. The main thing is using every opportunity to produce food items.”

Simeneh has a good outlook on urban farming. He agrees that there’s land scarcity in urban areas. However, he argues there are abandoned pieces of land everywhere that can be put to use.

“The main problem in Ethiopia is not actually land scarcity but land management,” contends Simeneh, pointing out that the government should push for proper land use to attain its urban farming plans.

He also recommends that urban dwellers use plastic bags and pots to plant vegetables where there’s no place to grow plants.

The urban farmers and their challenges

This is the story of two friends in Adama, Negash, and Zerihun, who are residents of Dembela condominium. Negash is a driver, Zerihun a teacher.

Negash told us that he changed the garbage disposing area of the condominium into a farm. 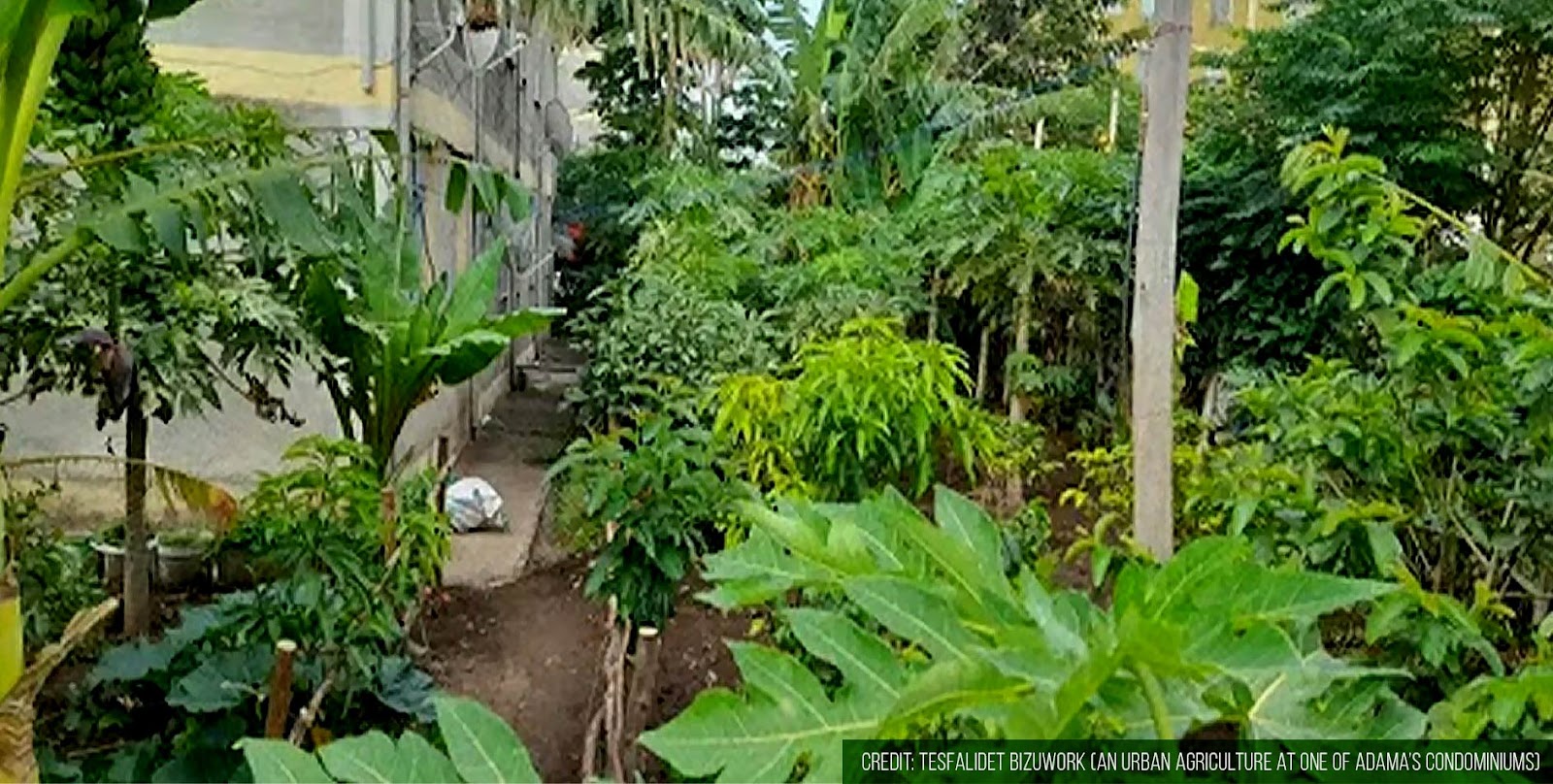 He said, “I can consume what I grow. I also provide vegetables for my neighbors at a good price.”

The other urban farmer, Zerihun Wedajo, had lived in Jigjiga, Somali region for 12 years working as a teacher. Growing up in a farming family, he knows about farming. “But this is different,” he says.

Now Zerihun's farm in his current town, Adama, grows fruit, providing avocado, mango, papaya, banana, and short-term vegetables like cabbage, pepper, and onion for his own domestic needs and for the market too. Zerihun has widened the scope of his farming into raising chicken, goats, and fish in his artificial small pond.

Like the irrigation farmer Dawit, the urban farmers Negash and Zerihun raised the problem of the lack of technical support by agricultural professionals, shortage of seedlings and other inputs like fertilizer and insecticides as well as market networking.

What will be the outcome?

Sileshi, a founder of Home Garden (a Facebook group focused on gardening), says urban agriculture may not reach many but can cover at least a family’s consumption to some extent. But what he stresses most is its advantage in protecting the environment when many join in the effort.

Simeneh, the economist, on his behalf said, “Urban areas are exposed to industrial pollution so urban agriculture can resist the pollution and create a balance,” he says.

Urban farming can also encourage Ethiopians to change their eating habits, according to Sileshi. People shouldn’t always depend on traditional staples. Apart from the usual food choices, they can experiment new dishes with the food items they can grow near or at home.

However, he doesn’t hide his belief that urban farming alone cannot answer the issues of food security. Still, it may save on some food expenses.

Both urban farmers, Negash and Zerihun, agree the working culture and attitude toward urban farming are still poor. However, they say it’s profitable. They explain that both of them use their own products for domestic use, saving expenses, as well as earning money by providing their products to local markets.

The misunderstanding between government and citizens

In Ethiopia, government initiatives such as using rice as a staple food during the famine in early 80’s, saving money, water ponding in dryland areas, village settlements in lowland areas, and tree planting haven’t been quickly accepted by the people. Most of the initiatives are criticized to be politically driven, leaving citizens suspicious of their motives.

Civil societies and social activists are not focused on such economic and sustainable growth issues as well. They are usually busy advocating political agendas, mostly negative ones.

Currently, Ethiopians are suffering from high food expenses. Still, they don’t consider urban agriculture as part of the solution, says Simeneh. However, he stressed the need to focus on proper land use, urban or otherwise to reverse the situation.

"Without citizens' genuine participation, nothing can be achieved,”Simeneh remarks,  recommending that it doesn’t hurt to try and see if urban farming works or not as citizens have nothing to lose if they try it.
Edited and co-written by Hiwot Walelign, senior Content Editor at Addis Zeybe