Ethiopia, home to many crops, including coffee, is being hailed for its drought-resilient crop, false banana - locally known as Enset.

Climate change significantly impacts the productivity and distribution of staple food in Africa and beyond. As nations are struggling to find a solution to the climate change and food shortage crisis, many are eyeing Ethiopia for its long-lasting, climate change resilient crop - enset.

A 2020 article on enset published on Plant People Planet attests to this, saying: “The area of land under enset production in Ethiopia has reportedly increased 46% in two decades, whilst yield increased 12-fold over the same period, making enset the second most produced crop species [teff taking the lead] in Ethiopia.”

Enset is a plant that is grown and produced in any climate, according to Wondawok Abebe’s 2022 research, “On-Farm Diversity of Enset.”

The study suggests that enset can be a ‘super food’ that can save millions of lives of people threatened by climate change. It also states that almost one-fourth of the Ethiopian population - more than 20 million people - consume enset. It is the staple diet in the southern and southwestern part of the country.

Over 50 species of enset are identified and put to use in the Wolayta zone alone, according to the joint study done by Wolaita Sodo University, Agricultural Farm Bureau of Wolaita zone, Sodo district and Areka Farm research.

The information Addis Zeybe received from the Agriculture and Farming Office of the zone shows that the cultivation and preparation of enset is different from other types of crops. 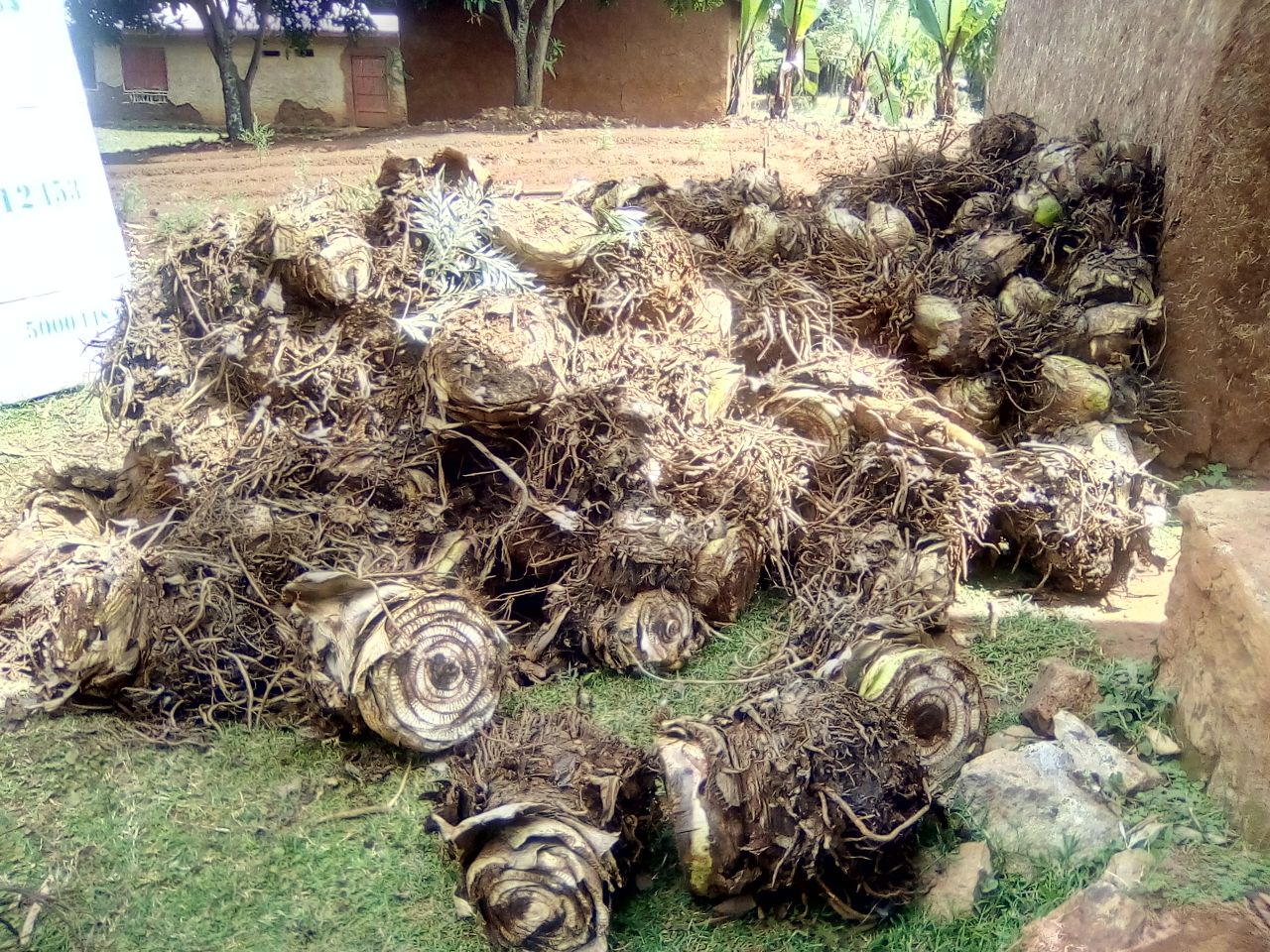 Slashed roots, ready to be planted

Enset doesn’t have a seed that can be sowed. What’s planted is its root which is cut, dried in the sun, and buried in the earth along with cow dung. This is done so the root sprouts many stems. However, it doesn’t immediately become a full grown enset tree. It stays like this for two years until it is taken out, and its numerous stems are planted separately with a 50 cm distance.

In the third year, the enset tree begins flowering. In the sixth or seventh year, it ripens and reaches its final stage of growth; ready to be harvested. Although the banana-like fruit is not eaten, its stem, which is rich in carbohydrates, is harvested. The edible part, the stem, is scraped (grated) by skilful women and prepared as food. The cultivation of enset is men’s responsibility while women take on harvesting. 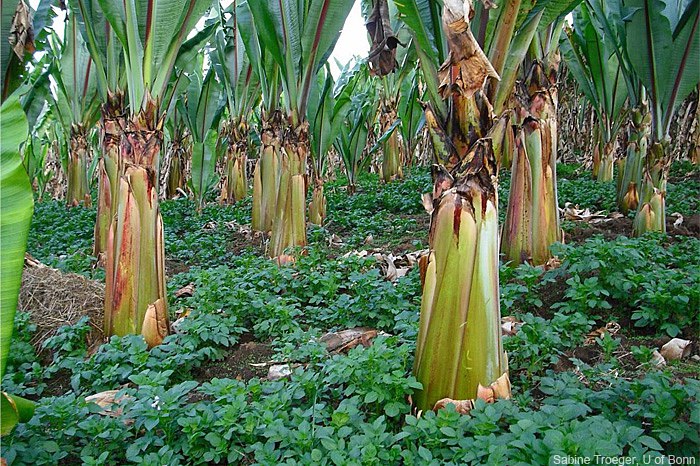 The long and wide leaves of enset - called koba - are cut off the plant and spread on the ground in the enset farm to put the stem on, which is the edible part, and then it is scraped or grated. The edible part of enset is called kocho. Women are usually the ones chosen for the scrupulous task of grating kocho as it needs patience and attention. 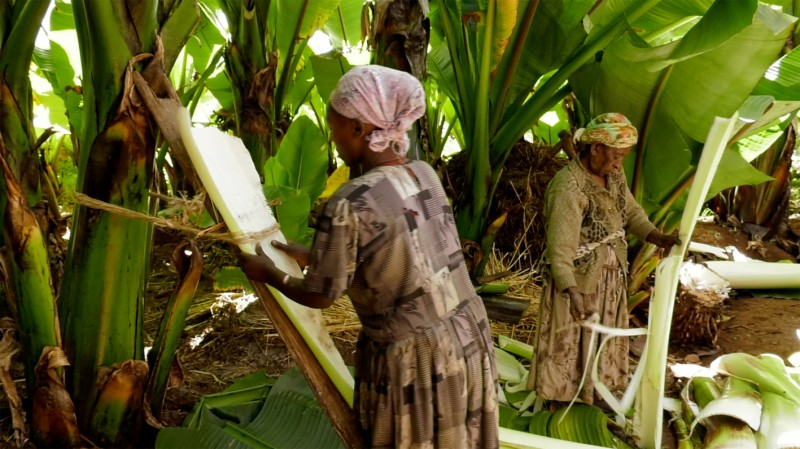 Women getting ready to grate enset

Different utensils are used to scrape the kocho from the enset stem; such as a wide timber to lean the stem on and a sharp bamboo used to graze. The kocho, grated and accumulated, is then wrapped tightly with the enset leaves (koba) in portions and put away. 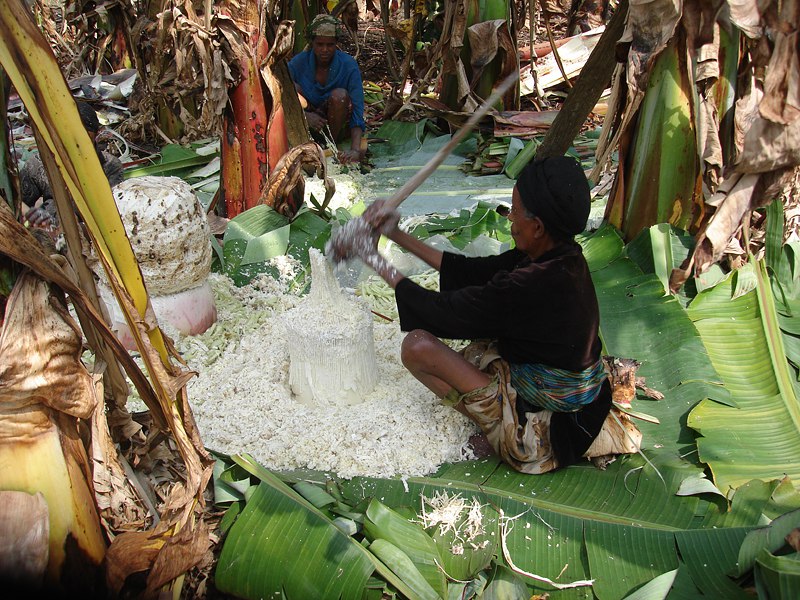 A week after, the packed kocho is opened, kneaded, and then wrapped back with fresh leaves again. This procedure is done again in the second week. In the third week, the packed kocho is put in a clean hole, dug in the ground for this purpose. Any household in the southern part of Ethiopia has such a kocho stock put in the ground, usually in  backyards. Families take out portions of kocho from the buried packages and prepare them into different dishes.

This way, the kocho can be used for a long time. It doesn’t get spoiled. Its purest form - bula - is prepared by squeezing the kocho and accumulating its fluid. The starch-containing liquid later turns into concentrated white powder.

Kocho can be made into flat bread, porridge and other various dishes.

The enset species specifically known for their healing effect are named in Wolaita "Lochungya" and "Tasuwa", as Teferi said. He added that when drought hits an area, the types of enset that are used for human and animal consumption are called 'Anka', 'Ankogena', ‘Goderia', 'Bedaya' and 'Mazya'. The names differ from place to place. These species of enset can be preserved for a long time, ensuring food security.

ropes made from enset

The dried leaves (koba) of enset can also be made into different items, such as ropes, mats and other household items for the traditional homes in Wolaita. Enset leaves are also used as animal fodder.

“Man-made and natural challenges are affecting the productivity of enset,” says Teferi. These factors usually dry the enset plants before they ripen, putting all the years' efforts in vain. Among the challenges, he mentions current and newly coming diseases, pests, and poor land-use conditions. Teferi urges that the concerned bodies should give due attention to enset production as the plant has proved itself over the years that it can be a solution to the food crises in the country.

World Economic Forum published an article in March 2022 calling enset a “starchy wondercrop” that can help alleviate the growing food insecurity in the world. The article also suggested that identifying underutilized indegenous crops, such as enset, could bolster global food security.

UN Dispatch also included enset in its March 2022 Popular Topics commentary, calling it a “wondercrop”, and estimating its age to be counted in thousands of years. Asking why enset hasn’t been popular worldwide, having all the benefits, the commentary says the cultivation needs the indegenous knowledge of people who have been using it as food for centuries.

For the plant being climate change resilient - growing in different areas - feeding nearly a quarter of the country’s population, its kocho lasting for long without going stale, prepared into different dishes, and its byproducts made into different household items, it doesn’t surprise anyone if enset is dubbed as a “wondercrop” of Ethiopia.

For a keen observer, the solidity of these 50-60 year old Peugeots, give an impression that they would yet serve for years to come.