A Facebook page with more than 240 thousand followers shared a post  reporting that “18 trucks that were transporting thousands of TPLF forces heading to Afar were destroyed by the Ethiopian Air Forces.” Until this article was published The post had been shared more than 90 times and obtained more than 1,600 reactions.

However, the post is rated as False due to its inexact use of images to support the claim. 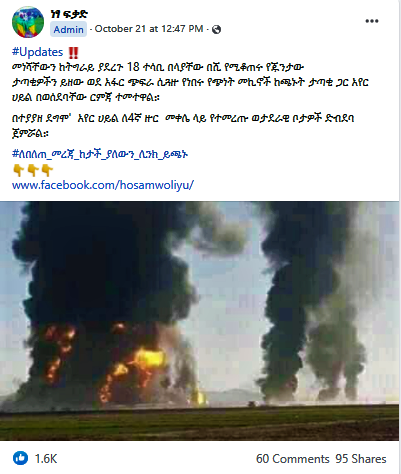 Reports of fresh military offensives have come out recently. The Ethiopian Federal Government has been conducting airstrikes there have been more than four Airstrikes since October 18. The airstrikes have grabbed the attention of major global news and social media outlets. After the attack, the two belligerent parties have come up with their own reports about the strike. Soon after the airstrikes, TPLF has accused the Ethiopian Government of targeting civilians and personal properties in the airstrike. On the contrary, the Ethiopian federal government spokesman Leggesse Tulu has told Associated Press that the airstrikes in Mekele targeted a former military training center which was being used as a “battle network hub” by rival TPLF forces.

Haqcheck has used a google reverse image search to validate whether the image shows an attack by the Ethiopian Air Force or not, and the search led us to a 30-second short video released by the Newyork Times in February 13, 2021.

The video shows an exploded fuel tanker at a crowded border post in western Afghanistan, Kabul. The tanker exploded on Saturday afternoon which set off an enormous fire that spread to more than 100 other tankers as intense flames. The catastrophe claimed the lives of 17 people. 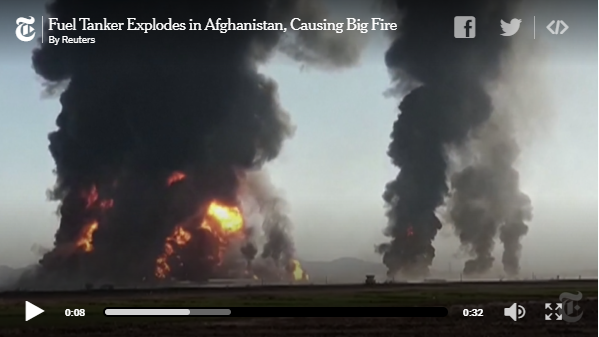 Even though there are different wrecking claims regarding the airstrikes in the north, the image doesn’t actually show an airstrike bombardment by the Ethiopian Air Force. Therefore due to the wrong usage of an image to support the claim the post is rendered as FALSE.

The image, in support of the claim, was previously posted on Facebook.