False information can come in the form of news, stories, or hoaxes. They are mostly created to deliberately misinform or deceive readers. Most of the time these stories are designed to either influence people’s views, push a political agenda, or cause confusion. They can often be a profitable business for online publishers. False information can deceive people by looking like a trusted website or using similar names and web addresses of reputable news outlets or organizations. As usual, during the month of September, different claims including pictures, videos, and scams have been spotted.

As previously observed, social media posts have been using false images to support claims. Many false claims have been made utilizing images that don't fit the description, even though false image claims decreased in the later days of the month.

Fake or manipulated images through social media platforms have the capacity to deceive, cause emotional distress, and influence public actions and opinions. Nowadays the misinformation trend in Ethiopia, especially using false images, is increasing rapidly.

Most of the false images HaqCheck has spotted are related to the current situation in the northern part of Ethiopia.

In the first week of September captioning “Ethiopia and Israeli forces have agreed to work together” even though the caption is mentioning Israel, one of the images shows Ethiopian and French air forces.

Such claims manipulate contexts or twist events to distort facts. During the time when the claim that the Ethiopian and Israeli air forces agreed to work together, Prime Minister Abiy Ahmed (Ph.D.) went to Turkey and paid a two-day work visit. The Prime Minister and the Turkish President Erdogan inked a military cooperation agreement. The claim follows the event and such posts have a greater potential to misinform and make people believe, rather than claims which emerge out of nowhere with no background event or context.

In the second week of September, an image showing heavy artillery shelling in Mekelle claiming that gunshots and heavy artillery were heard 47 km away from the capital city of Tigray.

The claim followed a fresh wave of fighting between belligerents in adjacent areas bordering Afar, Amhara and Tigray regions.

Even though the image is in Mekelle, that image was taken and reported on a Voice of America (VOA) news network reporting “during an airstrike attack one person has died and houses are burnt down”.

As the armed conflict has continued, reports of a worsening humanitarian crisis have been coming out of Tigray. These reports were followed by claims that used false pictures. Social media posts claimed that a public protest was held in Mekelle against the Tigray People’s Liberation Movement (TPLF), saying that they could no longer tolerate the rule of the TPLF. The claim used three false videos to support the claim.

The other image which has been circulating on social media in connection to the current situation in the northern part of Ethiopia includes a ‘woman crying’. The caption used for this image was starvation in the Amhara region of Wollo. But the image shows a woman crying because of a disastrous fire incident that happened around a marketplace in the Wolaita Zone of the South Nation, Nationalities, and Peoples Region. A child affected by malnutrition in Somalia was also used to show the starvation in the Amhara region of Wollo.

In the third week of September, a false image was posted on Facebook to show Ethiopian air forces in operation.

Nowadays, people are increasingly reporting social media messages that offer grant money and other giveaways. As people seek more ways to earn money, scammers use these weaknesses on social media to get money out of people. In the second week of September, many scams appeared in the name of globally known companies.

A fake news trend in Ethiopia is widely expanding on social media platforms, especially Facebook. A video claiming to show a military operation showing afar heroes and EPRDF soldiers killing TPLF forces was posted on the third week of September. But later a reverse image search revealed that the video was taken from a war between Saudi-led soldiers and Yemen forces in the Jizan axis at the border of Saudi Arabia. 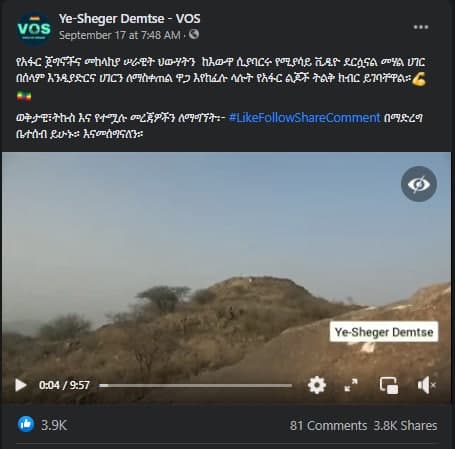 Along with fake news and scams, false advertisements are also used on social media platforms even if they are advertised on Facebook. One of the fake advertisements we had noticed in the third week of September is a false claim impersonating a reputed organization such as Ethio-telecom on a post offering a gift prize including a free 100 GB and i-phones.

HaqCheck’s general observation is that even though there are a lot of social media posts using false images, recently video clips are also coming out increasingly to support their claims.

We urge the public in general and social media users in particular that they should be conscious of the social media landscape. This includes disinformation trends and consumers should identify the right pages and sources to understand the intention and credibility of the message they are reading or sharing.

Regarding scams, as we always recommend, when social media users receive random messages and with automatic links, they should refrain from giving their private information because it can be used for potential scams. They should reach out to the mentioned entity or fact-checking organization to verify the message or information they receive.

You can find the detailed weekly summaries here:

The closure of Jimma airport, controversies over the resignation of the Minister, and the issue of the highest and lowest points in Africa.

War and Propaganda during the Tigray Conflict

Propaganda is now a tool to intensify war efforts. It's also a tool to deceive & mislead the enemy; spreading info., through lies or manipulated facts