Niksat: the Ethiopian tattoo tradition - past and present

Niskat, an age-old practice in Ethiopia, should be thought of as a kind of body art like tattooing.

Young girls, particularly in the northern regions of Ethiopia such as Tigray, Gondar, and Gojjam, get Niksat drawn on their faces, necks, gums, and hands.

This practice is now being considered outdated by the youth as they are adopting modern tattoo designs and crafts.

There’s a fear among the elders in Gondar that the traditional artistry is getting lost.

“The traditional patterns had meanings. They were beautiful. They were part of our identity. The new ones are bizarre. Only unruly kids get them done on their bodies,” says Yelfign Matebe, an elderly woman in Gondar, sad that the old tradition is dying out.

A young man we found getting his late mother’s photo tattooed says otherwise. He told us that he’s grateful modern tattoos exist. “I’m happy I get to engrave my mother’s picture on my skin. It doesn’t get lost, nor be washed away. I’ll have it with me till the end.” 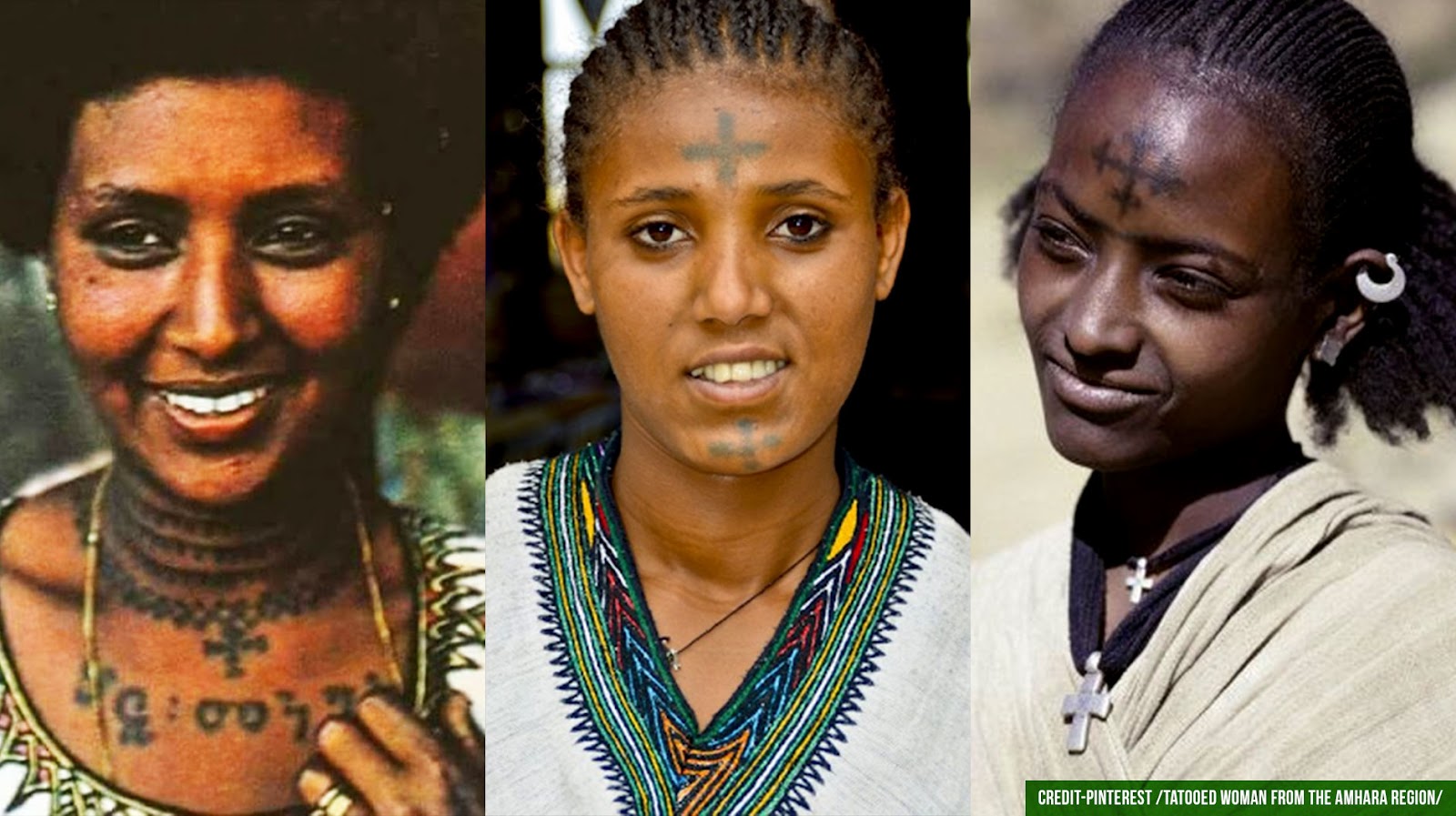 When the practice was in its prime, half a century ago and beyond, elderly women were the people tasked with carrying out the Niksat. They were respected professionals known as Nekash. When a Niksat is imprinted beautifully, the bearer was admired as well as the Nekash for her skills.

Yelfign says that there was a popular Nekash in Gondar called Yeshihareg Ebabu. “Her hands were blessed. Those who went to her didn’t feel much pain. For that, she was favored by many,” she explains.

Young girls, who are not adolescents yet, are encouraged - sometimes even forced by their mothers  - to get the Niksat. The pretext is that the girl will not get a husband if she doesn’t decorate her face with the conventional patterns of Niksat.

When a young girl goes to the Nekash, she takes several needles with her. As there’s no anesthesia, she’s made to drink a local liquor called Areki (it’s common for young adults in rural Ethiopia, especially in the north, to take alcohol), to withstand the pain with diminished awareness.

The Nekash then rubs the skin with diluted soot or fine charcoal powder and keeps piercing the skin with 3 to 5 needles tied together until the color is imprinted into the skin and the intended effect emerges. The girl may need to go to the Nekash for two consecutive days to complete the process. But once it’s done properly, it doesn’t fade easily, staying with the woman until her old age.

The tattooed girls don’t go out to the sun for two weeks and keep the tattooed part of their body tied with a clean cloth to avoid unwanted reactions.

Yelfign says the Nekash was paid in kind for her deed: “Grains and coffee beans were preferred items of payment.” This was half a century ago. However, the current fare for traditional Niksat is 100 to 500 ETB (2 to 10 USD).

When the Niksat is done beautifully, it becomes the talk of the locality, with shepherds applauding the Nekash in their songs:

Spectacular is the tattooed cross on your forehead,

The patterns on your neck,

The commonly executed tattoo patterns differ from place to place. Girls in Tigray and Gondar have similar symbols tattooed while those in Gojjam have their own particular designs. As the Niksat tradition is mostly practiced among Christian communities, the decorations mainly contain varying images of the cross. 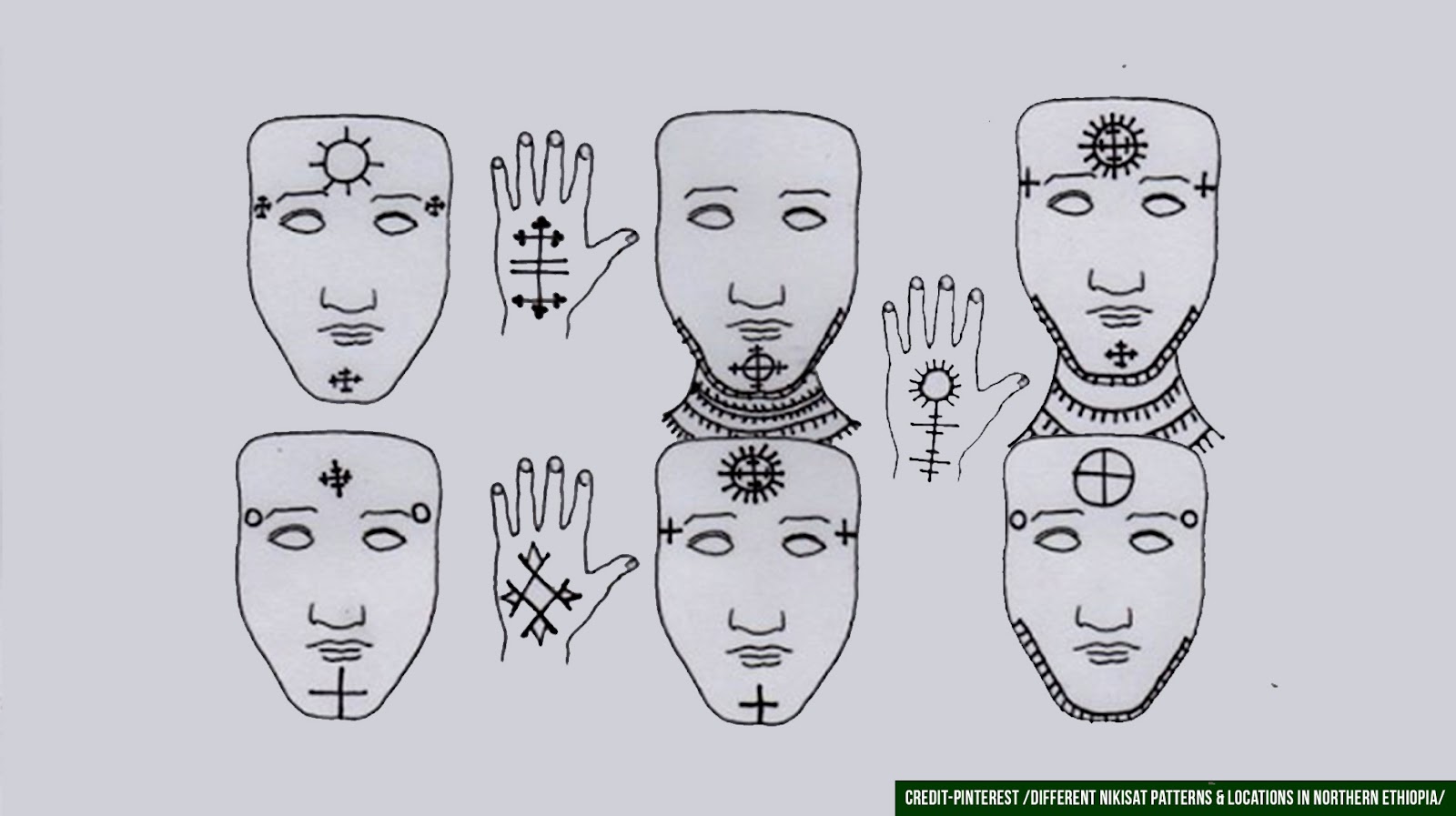 Young women get the Niksat not only administered on their skins but also on their gums. The traditional gingival tattoos are famous across Ethiopia, even to this day, especially in the countryside.

Having darker gums is one criterion of beauty in the rural areas of Ethiopia. In Tigray, Gondar, and Gojjam, it’s not only the women who get Niksat on their gums. Men also do it. What differentiates it from the women’s is that the whole length of the gum is not tattooed, just a part of it. The Niksat on the men’s gum is called Guramayle.

Though traditional gingival tattoos are sometimes meant to be home remedies for dental diseases, most do it for aesthetic purposes. The logic is that white teeth against dark gum give a smile more radiance.

There’s a famous verse in Gondar that goes:

I don’t have a lamp,

I bid you to just smile once,

It will brighten the house through dinner. 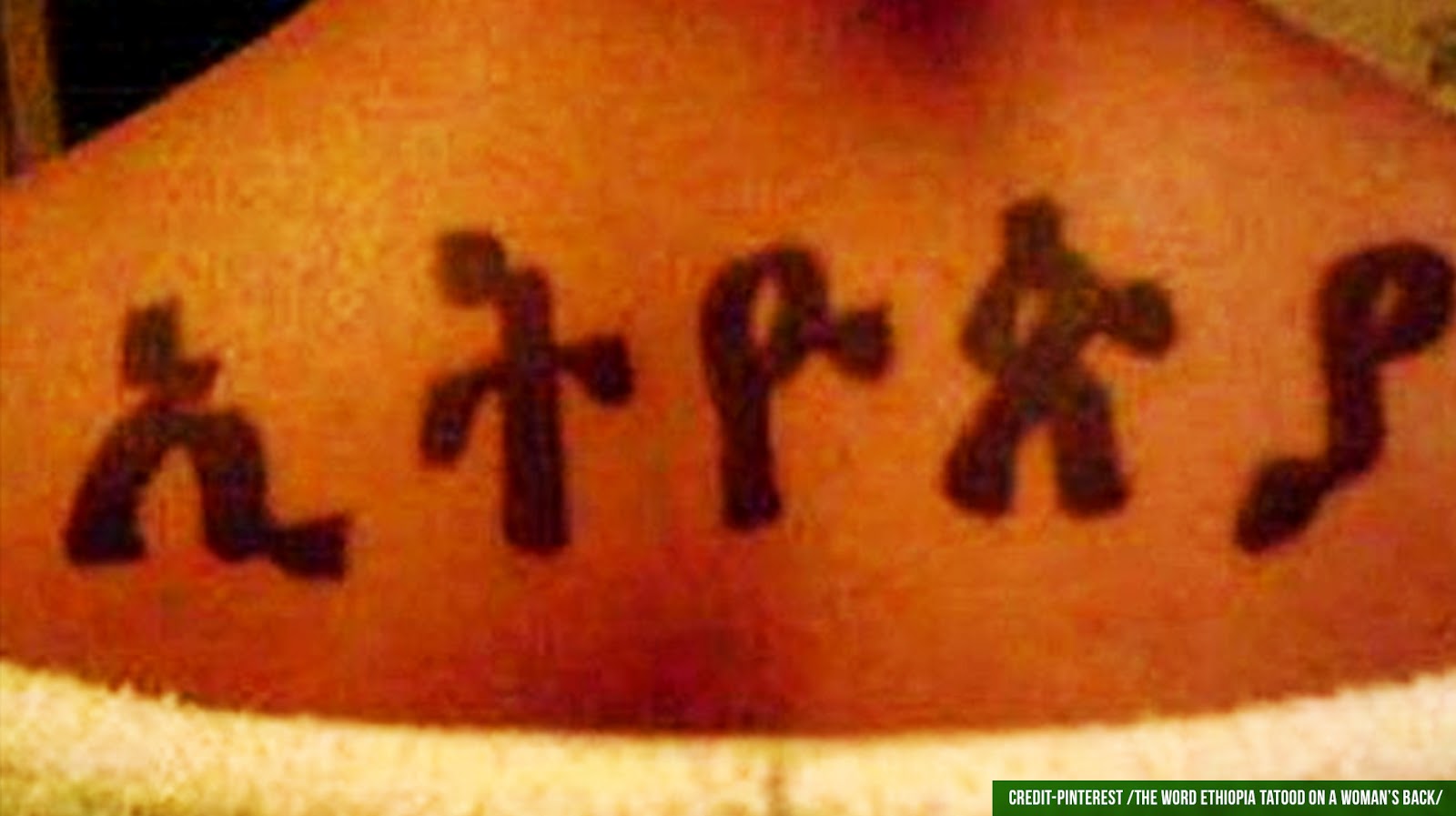 Tattoos were used as a sign of strength in faith by Egyptian Copts during the time of oppression by the invading Ottomans between the 12th and 15th centuries, says Jeniffer Johnson in her article - Tattoos of the Cross, also claiming that the Egyptians learned the practice from Ethiopian Christians.

Ethiopians started getting tattooed in the fourth century along with the introduction of Christianity, according to Solomon Tessema, an expert on traditional practices at Addis Ababa University. (Source: Ethiopia Today, 2015)

Symbols of Niksat are believed to be cultural and religious identifiers of the bearer. Women from Gondar and Tigray usually get chain-like patterns on their necks with a sign of the cross on their chest. Those from Gojjam have small cross marks on their foreheads and chins.

Your neck, adorned with patterns,

Loudly speaks of where you are from.

Moshe Lapidoth and Gali Aharonowitz elaborate this in their study on tattoo removals saying, “Many Jews in Ethiopia adopted the Christian custom of tattooing various parts of the body, either after conversion or to hide their Jewish origin. After emigrating to Israel, they sought to remove these foreign symbols to better blend with society.”

The Beta-Israels who lived among Ethiopians, mostly in Gondar, had to use tattoos as one means of concealing their true religion to avoid stigmatization while living under a strict Christian culture. The marks of the cross, visible on their faces or hands, gave them Christian identities to observers.

Apart from its obvious purpose, which is beautification, and its role as an identity indicator, tattoos are also believed to ward off evil eyes. Those who get the symbol of the sun on their forehead are considered to be protected as the symbol draws the attention that was meant to be for the entire face.

Those who get gingival tattoos also swear by its healing powers for dental problems. Yelfign Matebe told us that Niksat was also believed to be curing goiter - enlarged thyroid glands on the neck. “As there was no modern medication for it, we used Niksat as a remedy.”

As traditional tattoos are popular in northern Ethiopia, body piercings and washable and colorful skin patterns are common in the southern part of the country.

Now, one can observe a different trend of Niksat in Gondar. The traditional patterns are fading with time as the modern ones become popular. Young men and women are getting tattoos on their bodies, not of the old patterns but photographs or names of their beloved ones. They are also getting flowers, butterflies, and other fashionable symbols engraved. 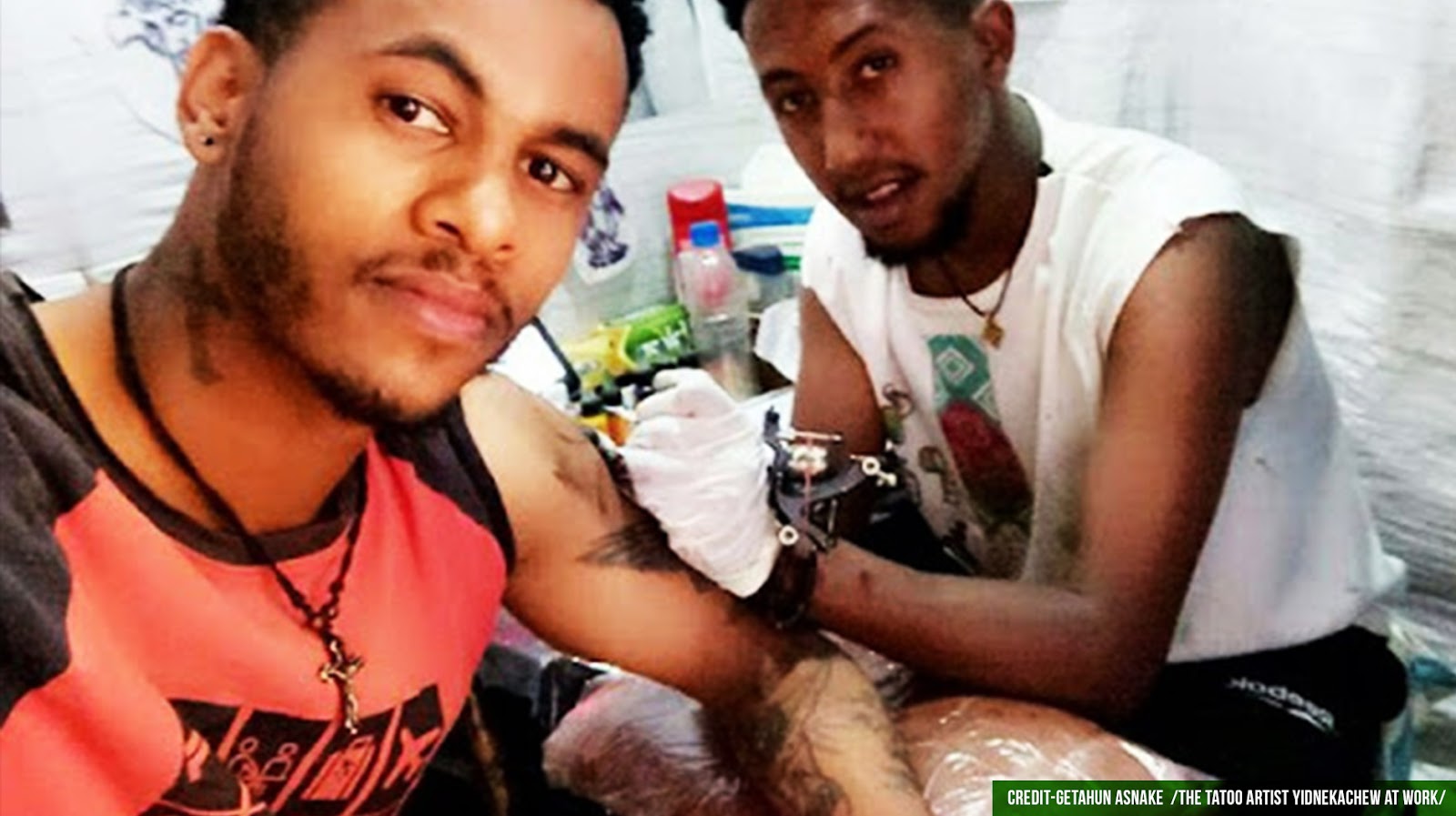 Yidnekachew Yikunoamlak is a professional tattooist in Gondar, who lives and works in the area called Bilko in the city. He told Addis Zeybe how he got into this business. “I do sketches sometimes. People encouraged me to get into the tattoo business as it is becoming trendy in the city. I’ve spent seven years in this business.”

The most popular tattoo images now are photographs of people one doesn’t want to forget or symbols from a certain religion. “Some get tattoos to be considered as a sign of being cool. They often don’t seem to know the meanings behind the symbols they tell me to tattoo. Some also do it just to cover scars,” says Yidnekachew. 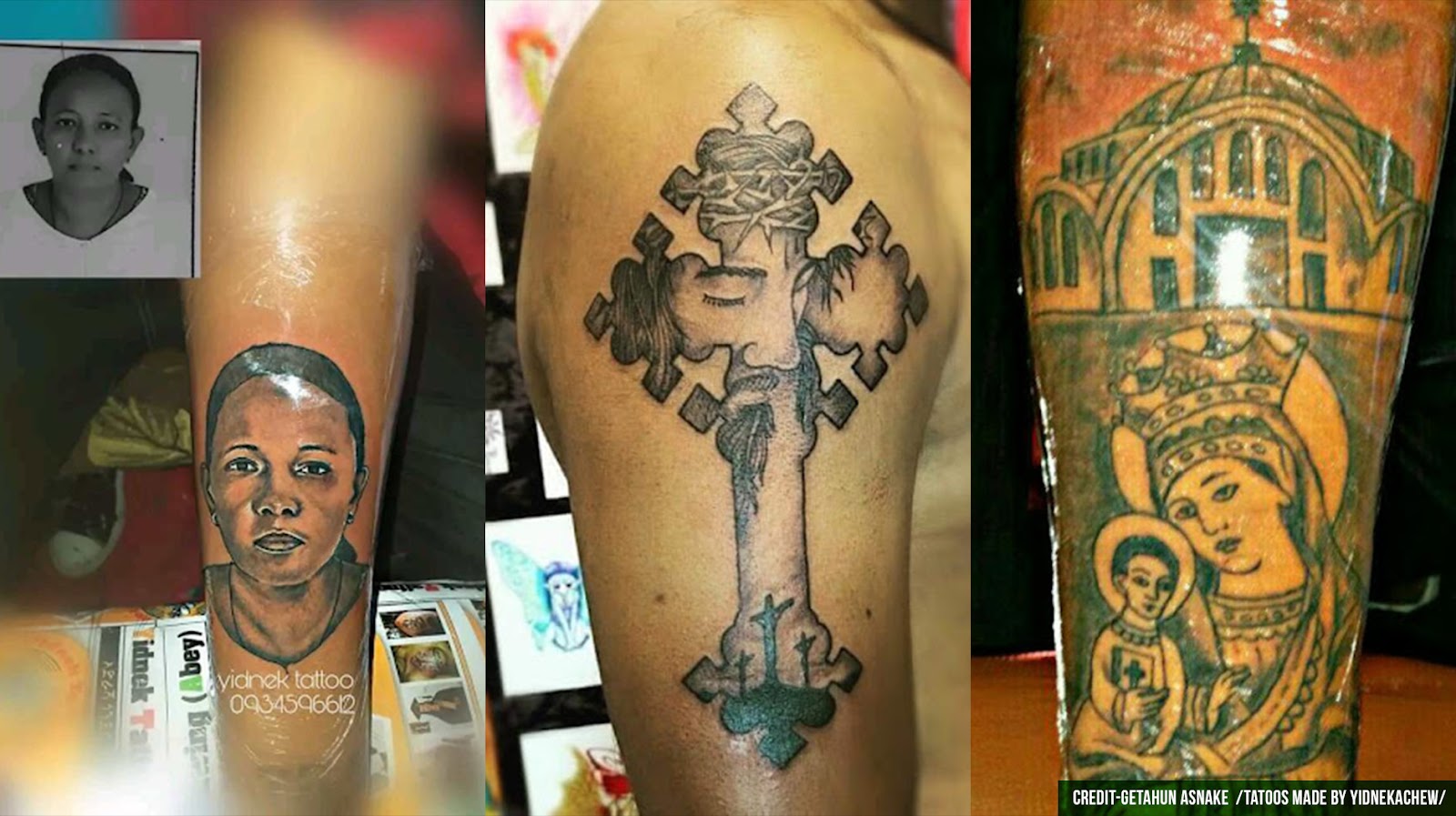 The tool he uses to create the tattoos is called Dynamic Tripple. It’s an electronic device with needles attached to the tip, discharging black ink as it pierces the skin when turned on.

Patterns that are difficult to sketch take as long as two hours to finish, says Yidnekachew. He charges 400-2500 ETB (8 to 50 USD) for getting the tattoos done. Inevitably the more challenging the pattern is, the more costly it gets.

Yidnekachew says he advises people not to get tattoos of something they might regret later.

“There are young men and women who get tattoos of their girlfriends/boyfriends' names. They later come back to me asking to get other tattoos done over the previous ones. I then know they are separated,” says Yidnekachew smiling, explaining how the tattoo business can sometimes be challenging.

Some individuals go to big cities to get their tattoos erased. But even though they get it erased, it always leaves a scar behind. They come back to Yidnekachew to get tattooed again over the scar, to cover the unpleasant look.

One of the responsibilities of the Ethiopian Food and Drug Administration is to evaluate the chemicals, sterilizers, and equipment used in registered tattoo parlors.

This doesn’t cover the Niksat which is done traditionally.

“I was told not to eat solid food, nor something spicey for a week or so. I know some people who have had allergic reactions when they have their gums tattooed. But I was okay,” says Samrawit Eshetu, a woman who had the traditional gingival tatoo.

She also mentioned that those with persistent pain after getting tattoos take over-the-counter painkillers.

Modern tattooing is done using an electric machine that has a cluster of fast rotating needles that deposit liquid color into the upper layer of the skin, according to Aiggan Yemane and Bethelhem Tamene’s 2022 article.

The study on tattoo professionals’ knowledge of infection control points out that “cuts, sores, and sharp items that penetrate the skin often allow infections to enter the body”.

Yidnekachew says no customer has come back to him with complaints related to health complications. “I take much care when I do the tattoos. I don’t use one instrument twice.”

Though modern tattoo patterns are considered fashionable among the youth in Gondar, those who get them are dubbed “unruly” by the elders. It’s taken as a sign of rebellious behavior. On the other hand, those who get traditional tattoos are seen as sensible and cultured.

The countryside goat herders men back this notion with their usual sarcastic songs:

Leaving behind her mother’s adornments,

When she came by

Bearing tattoos of a snake on her neck, a butterfly on her arm.

She doesn’t even know the meanings

Throwing away her own.

In spite of society’s criticism, modern tattoos are flourishing; the youth favor them over traditional ones.

The festive September of Southern Ethiopia

Gifata and Yahode are among the distinct celebrations in Southern Ethiopia which mark the beginning of a new year.