The Simien Mountains chain, covering a huge landmass of 412 km2, was recognized as an Ethiopian national park in 1964. It is now under threat because of delayed road construction going through it.

The biodiversity of the park has significantly declined over the years and, in 1988, ten years after being registered as a world heritage site, UNESCO declared it to be under threat.

The recent road construction has worsened the situation, posing a further, grave danger to the biodiversity of the park.

The old road that passed through the heart of the park had served for many years, taking passengers to the different towns and districts the area covers.

As UNESCO proposed a different detour as the old one was damaging the biodiversity of the park, the construction of the new road, 70 km long, started ten years ago, commissioned by the federal government.

The head of the park’s administration office, Abebaw Azanaw, told Addis Zeybe that the delay in the construction has posed danger to the biodiversity of the park. “Shortage of construction machinery and problems related with security and territory demarcation for the road are the major challenges,” he said.

“To find a solution to this problem, we have repeatedly issued letters to the Ethiopian Roads Authority but we couldn’t get any response,” said Nakachew Birle, the communication officer of Ethiopia’s Wild Animals Protection Authority.

Simien Mountains National Park is bordered by six neighboring districts in the North Gondar zone. The lives of over 20,000 farmers are tied to the park today.

Because of the 10-year delay in the road’s construction, the breeding and activity of wild animals in the park, specifically in places like Sankaber, Chenek, and Buahit, have significantly decreased.

These places are said to be repeatedly plowed because of the constant change of detours. Such activities put the park’s wild animals, as well as the over 1,200 indigenous plant variants, at risk, according to the park’s administration's official statement. 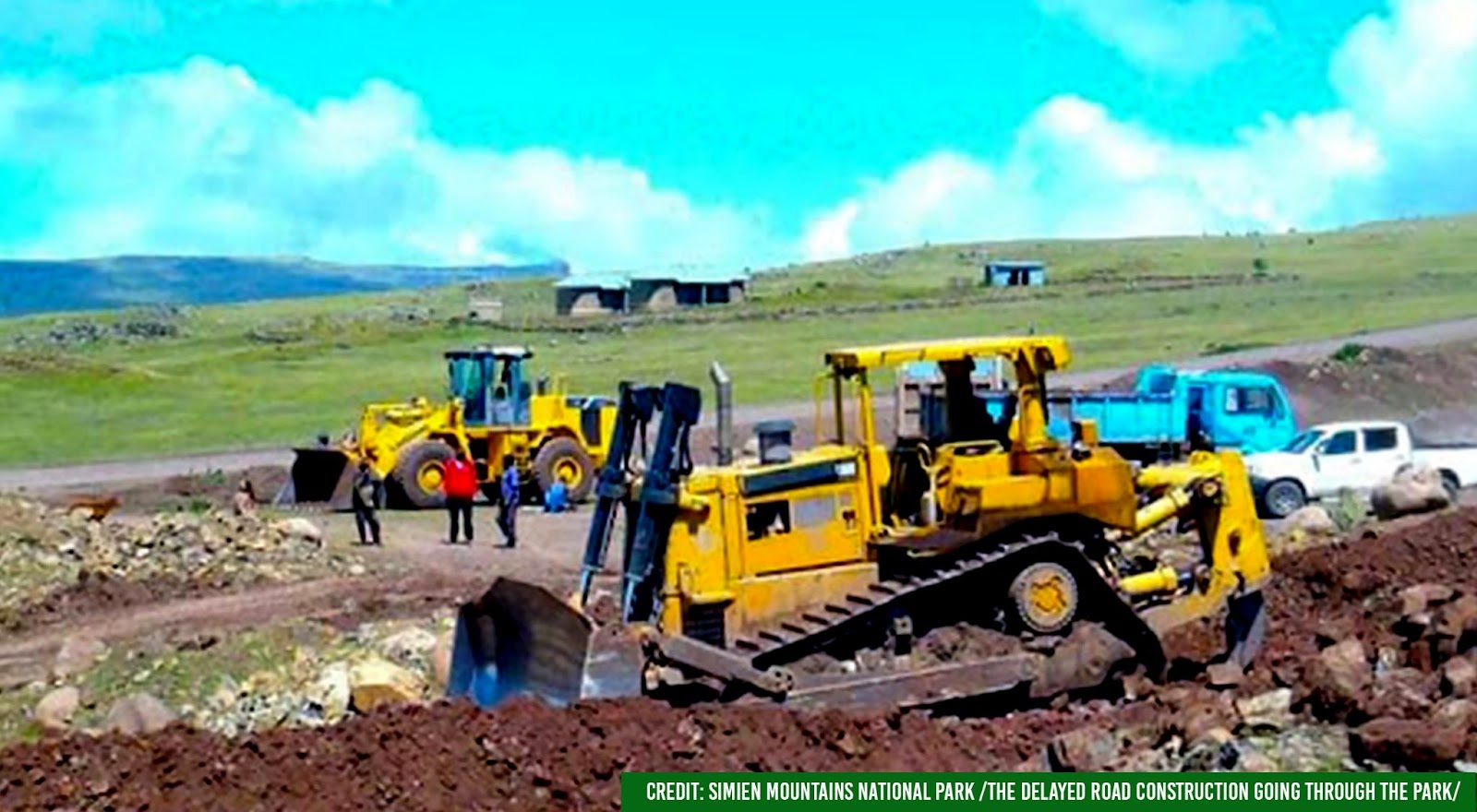 The Ethiopian Wild Animals Protection Authority is the body that administers all the national parks in the country. The communication director of the authority, Nakachew Birle, agrees that the road construction poses a threat to biodiversity and that they have talked to the Ethiopian Roads Authority several times.

Though the federal road authority is in charge of the construction, the Defence Construction and Akir Construction, a private contractor, are responsible for the actual work on the ground.

Akir Construction has taken many years to undertake the work and finally bowed out without finishing it.

The information received from the Simien Mountains National Park office indicates that the work supposed to be carried out by Akir Company has now been given to Defence Construction.

Addis Zeybe’s efforts to get a response from the Ethiopian Roads Authority were not successful.

To document current situations at the park, a wild animal count is conducted regularly. This count identifies not only the number of animals but also their sex, age, and species.

“The counting takes place two times a year. Walia Ibex, Red Fox, and Gelada Baboon are among the main animals that are counted. However, there hasn’t been any counting in the past two years,” said the park’s administration office head, Abebaw.

The counting that was done two years ago was encouraging, according to Abebaw.

Some 20,000 Gelada baboons and over 900 Walia Ibex are confirmed to be living in the park while the number of Red Foxes tripled from 25 to 75.

The park’s officer told Addis Zeybe that this year’s result will be disclosed once the counting is over. It’s to be recalled that two years ago about 330 hectares of the park’s land was exposed to wildfire, in the areas of Sanka Ber and Mesgego.

However, Abebaw says the burnt part of the park has totally recovered because of a joint venture of different stakeholders.

Simien Mountains National Park is 800 km north of Addis Ababa, Ethiopia’s capital. It is found in the North Gondar zone, 120 km away from the historical city of Gondar. It is the home of Ethiopia’s highest point, the Ras Dashen.

This is a place that entertains a regular flow of international and local tourists. Prior to the COVID-19 outbreak, 32,000 international tourists visited the park in the 2018/19 fiscal year, the information desk of the park indicates.

Tadele Molla, the tour guide associations’ chairperson at the park, said that the pandemic as well as the war in North Ethiopia halted all tourism activities in the past two years.

“About 120 members of the tour guide associations faced challenges. But there is progress which started in August this year. Tourists are gradually starting to visit though the number is nowhere to be compared with the previous one,” Tadelle said.

At the beginning of the current fiscal year (2022/23), that is in the past 3 months, 240 local and international visitors have toured the Simien Mountains National park, contributing  241,542 ETB (about 5,000 USD) in revenue. The year before last recorded the least number of visitors annually, 2,238 tourists.

Apart from the endemic wild animals, 200 species of birds are sheltered at the park, with only five of them only found in Ethiopia. These are namely: Abyssinian Catbird, Abyssinian Longclaw, Ankober Serin, Ethiopian Siskin, and Spot-breasted Lapwing.